The VP Racing Fuels NMCA West Drag Racing Series championship season concluded with the completion of the 6th Annual Mickey Thompson NMCA West Coast World Finals at Auto Club Dragway in Fontana, California, October 13-15. NMCA West championships were on the line, as racers pulled out all of the stops while battling major winds that caused many of the classes to be run at the eighth-mile race distance. In addition to the straight-line action, the Hotchkis Auto X presented by Nitto Tire put on a great show as always, with many of the drivers competing for the Hotchkis Grand Champion award. 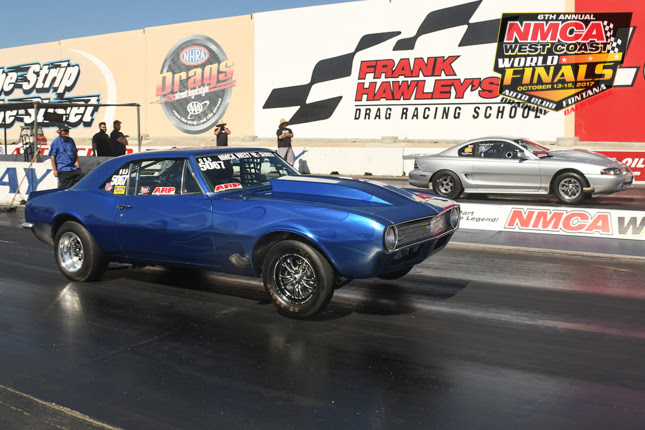 In ProCharger Outlaw Street competition, Johnny Coleman led qualifying with 4.571 elapsed time at 159.55 mph, and he would improve on that with a 4.56, but in the final round, it was Tom Marshall taking the win and the trip to the Aerospace Components Winner’s Circle with a hole-shot victory over Lafayette Williams, 5.121 to 5.119.

Looking to make a statement in the Lucas Oil Ultra Street ranks was David Holtgrew who set the pace in qualifying with a 5.276 at 133.50 mph. But as was the case with every number-one qualifier this weekend, it didn’t guarantee an event win. In the Lucas Oil Ultra Street final, it was 2016 champion Mike Silva squaring off against the familiar Mustang of Dan Dagata. Silva would drive to victory with a 5.32 over Dagata’s 5.88 effort.

ARP Outlaw 8.5 competition saw Manny Figuerua take the top spot in qualifying with a 4.826 at 153.09 mph. His ’95 Mustang encountered problems during the second round of eliminations, which allowed Tim Orello to drive around him to the final where he met Tim Schmackpfeffer. The lights were near identical, but at the stripe, it was Orello for the win with a 5.53 over Schmackpfeffer’s slowing 8.63 run. 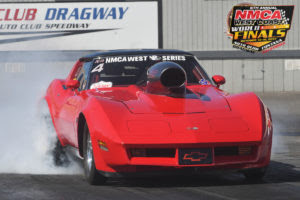 It’s been a tight battle in the Lucas Oil NA 10.5 ranks for the championships points and Joe Keurjikian moved a step closer with a number-one-qualifying run of 5.17. As with other top qualifiers this weekend, Keurjikian’s hopes would be dashed early with Ryan Bell and Ross Wilson making their ways to the final round. There, Bell ran a close race against Wilson, and took home the Victor trophy with a 5.218-to-5.258 winning effort.

In Meziere Top Sportsman action, Joe Stannard made it back-to-back wins for the Trans Am driver as he defeated number-one qualifier Raul Perez in the final round. Stannard was .002 on the tree while Perez left before the third amber activated, thus giving the easy win to Stannard.

Champion Cooling Systems Pro Comp competitor Michael Boner faced a tough final-round competitor in Zach Meziere, but he was up to the challenge. Their lights were near identical, (.012 to .013) and at the stripe, it was Boner who went 6.303 on a 6.30 dial in to Meziere’s losing 5.735 on a 5.70 bid.

The FSC Open Comp final featured two distinctly looking vehicles in Paul Geis’ ’52 pickup and Kevin Stokesberry’s ’71 Chevelle. Reaction times were very similar, but it was the pickup hauling the Victor home, running 11.084 on its 11.07 dial in compared to the Chevelle’s 9.559 on a 9.49. 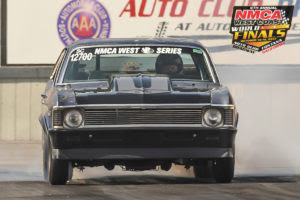 In a scene reminiscent of the previous NMCA West race, the final round of TBT Racing Products Street Comp saw Mike Sayle in the trophy round, and pitted against the very capable 2016 Street Comp champion, Jan Vanderpool. Sayle was quick on the tree with a .002 light compared to Vanderpool’s .097 effort, and that allowed his 10.885 on a 10.78 to defeat Vanderpool’s 12.750 on a 12.66 dial in.

David Butler found success in Edelbrock Super Quick at the third NMCA West race of the year, and looked like he was poised to rack up another win this weekend. In his way was Bob Earleywine, however, and in the final round, Butler went way red (-.178) and gave away the prize to Earleywine.

After five rounds of tough competition, Pedro Valadez found final-round victory in Calvert Racing Quick Street. Valadez, driving an ’87 Camaro with a stroked small-block, took the reaction-time advantage over Bill Batey in the final round, and secured the win with a 10.397 on a 10.37 dial in, while Batey had posted a losing 10.220 on a 10.21. 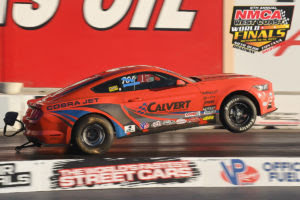 The 2016 Mustang Madness champion Brent Calvert has been leading the charge for another championship this year, and looked to seal the deal with a win at the World Finals. Driving the family’s Cobra Jet Mustang, Calvert was slow off the line (.049 to Ron Mihld’s .015), but he managed to push Mihld out at the top end for the win, running 8.635 on an 8.60 dial in while Mihld went 12.269 on a 12.29.

Classic Performance Products Nostalgia Street Car is always chock full of tough racers, and in the final round at the final event of the year, it was Mike Nordahl facing Dan Geis in a battle of Deuces. Nordahl’s small-block-powered ’64 Nova would prevail over Geis’ big-block powered ’64 Nova thanks to a reaction-time advantage, and a 10.534 performance against a 10.50 index compared to Geis’ 11.029 on an 11.00.

In Gear Vendors True Street, Dan Olson had the field fully covered and his closest rival, Dan Geis, by nearly a second. Olson averaged 9.198 seconds over three runs for the overall win, while Geis was runner up with a 10.031 effort. Michael Webb has strung along several 10-second wins now in his 2012 Mustang GT with another one here in the finals; Nick Cuaresma collected another True Street win in the 11-second category with an 11.072 average; Steve McQueen took home the 12-second win with his E55 AMG Mercedes with a 12.165 average; Ted Borles won the 13-eecond division with a 13.404 and Tyson McPherson, who grabbed the 13-second win at the last event, was awarded the 14-second plaque with a 14.206 effort.

The FSC Top Dragster shootout this weekend saw Cecil Wiles, Jr. square off against Heather Elliot in the final round. Wiles, Jr. grabbed the reaction time advantage and took the win, running 5.118 on his 5.05 dial in to Elliot’s 5.309 effort on a 5.03 bid.

In the Edelbrock Bracket Showdown on Saturday, Will Mangrum took the Super Pro win, Jack Swanson grabbed the Pro award, and Jeff Jones grabbed the trophy in Sportsman. Sunday’s winners were Greg Hicks in Super Pro, Joe Henchey in Pro, and CW Hoefer in Sportsman.

Finishing its fourth event of the season was the Hotchkis Auto X presented by Nitto Tire. The autocross, run by Racing Byrds, was another big hit, as it is every event. Awards for the two-day competition as well as the series winners are as follows: