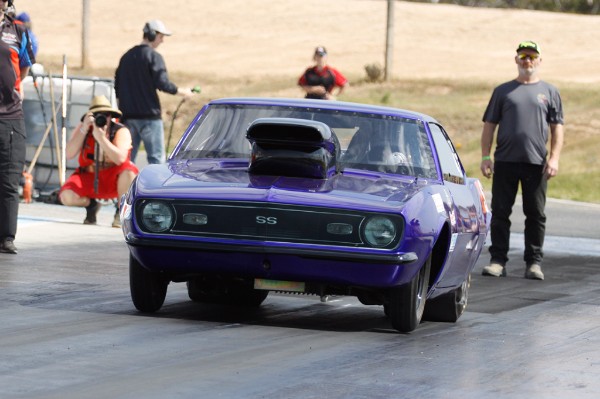 Chris Theo heads to this weekend’s Spring Nationals at Adelaide International Raceway well and truly on a high after taking out his first ever event victory three weeks ago.

Theo broke through for his maiden victory at Mildura’s Sunset Strip Nationals (September 23/24), claiming the Top Sportsman honours in what was only his third event in the bracket.

“I am still celebrating to be honest – everything went to plan on that day, it was just one of those days where nothing went wrong,” said Theo, who started in Super Sedan in 2012 before making the move to Top Sportsman at the start of this season.

“This was our third meeting in Top Sportsman, the third with a new engine, and our first ever race win. We are ecstatic.

“We did have a lucky break in the third round against Danny from SA and his little Calibra – he red lit and we just broke out. That certainly gave us a wake-up call and we redialled the car into the next pass, and went right through to the final.

“In the final it didn’t go the way we wanted completely with Greg having an issue on the startline, but without sounding like I am blowing wind up my own nose, the car was on song and I think we would have been okay. It was on it all day and just did not make one mistake.

“We are heading to Adelaide this weekend with an identical set-up as it was just that good. The only thing we will do differently is we may alter the delay box a little bit, as it seems to work a bit different on the Adelaide track than it does on others, otherwise the car is going as is.”

For the Melbourne racer, the Adelaide track is a firm favourite.
“I love the Adelaide track, absolutely love it. She might have a bit of age, but I think it has to be one of the best tracks around,” said the trailer technician.

“It just feels smooth, it has a good bite to it, the car performs and I think the track is killer.

“This will be our third big event in Adelaide. The first time I had to leave as I had no light on the car, the second time I had the sun in my eyes against Jason Stares and rolled through the lights blind which saw us give that one away!
“I am hoping this time around I will not make any mistakes and we can go right through!”

Theo thanks Structural Steel Supplies, Bayside Smash Repairs, Ben the Bike Tech, Ultra Tech and Pro Race Engines for their support of his racing program, as well as a very special group of people: his family.

“Without my family, we wouldn’t be going anywhere – especially my wife Olga. My three kids Costa, Nicole and Stacey absolutely love the racing and haven’t missed a meeting, and I wouldn’t be able to do this without all of their support. My friends Con and Andrea are also integral to the program,” the 49-year-old said.

Theo and the rest of the Top Sportsman field will be joined at Adelaide International Raceway for the Spring Nationals this Saturday.