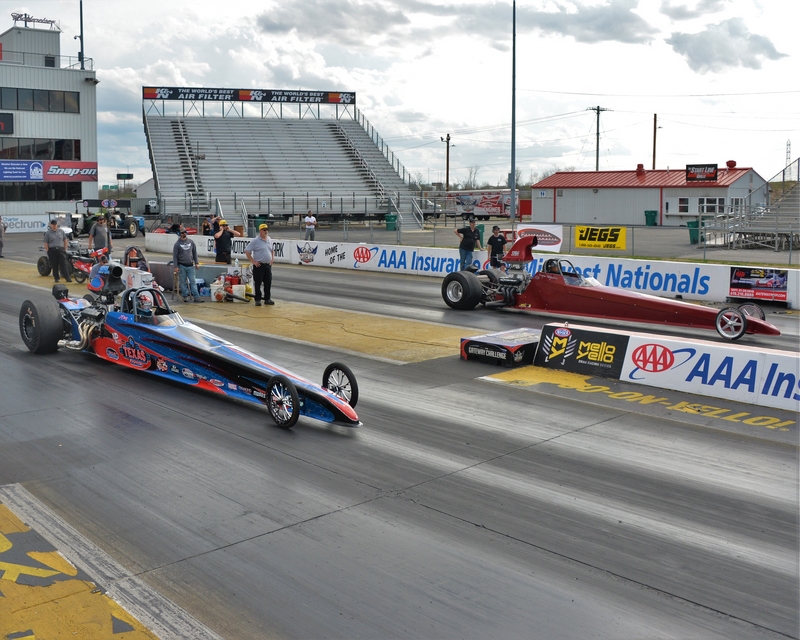 The JEGS Super Quick Series kicked off its 31st season of competition at Gateway Motorsports Park last weekend. Even though the early forecast looked dreary for Sunday, what an absolutely gorgeous weekend it turned out to be for Missouri in early April!

On Saturday morning the air showed -150 feet below sea level, perfect for NHRA’s fastest bracket racing series. After two qualifying sessions Brent Crowell of Evansville, IN placed his dragster at the top of the sheet posting a 4.505 elapsed time at 152.76 mph on the 4.50 index. The top five rounded out with Jay Oakley, Blake Peavler, Dean McIlvain and Christopher Mullins all running 4.50X. Fifty-four racers tried to make the field with the number thirty-two bump being a 4.610.

James Monroe picked up the Spectra 1 Best Appearing Car award on Saturday. The Bloomington, IN native has a nice candy apple red, silver and black paint scheme for this season on his 2008 Racecraft Dragster. Monroe made it to Round 3 with his blown combination before the car slowed up after having a .008 advantage at the tree.

In the semis, Mitchell Carter had the advantage on the tree over Tony Atchison. That’s all he needed to put a wheel out front and take the stripe by 0.040 turning on the win light and advancing to the final. The other pair slated Jay Oakley against John Luedke. Both drivers left 0.024 after the top amber flashed with Oakley running 0.010 to his 4.51 dial and getting to the stripe 0.010 ahead of Luedke.

Then the finals were set. Kentuckians Carter and Oakley were ready to do battle with only one-hundredth of a second difference in dial-ins, they would be looking at each other all the way down the track. Oakley left first with an 0.023 reaction time, but Carter wasn’t far behind at 0.029. Oakley took the stripe but broke out by just two-thousandths of a second doing so. Carter was on the brakes and followed though picking up the win. This is Carter’s second NHRA JEGS Super Quick Series win in his career. 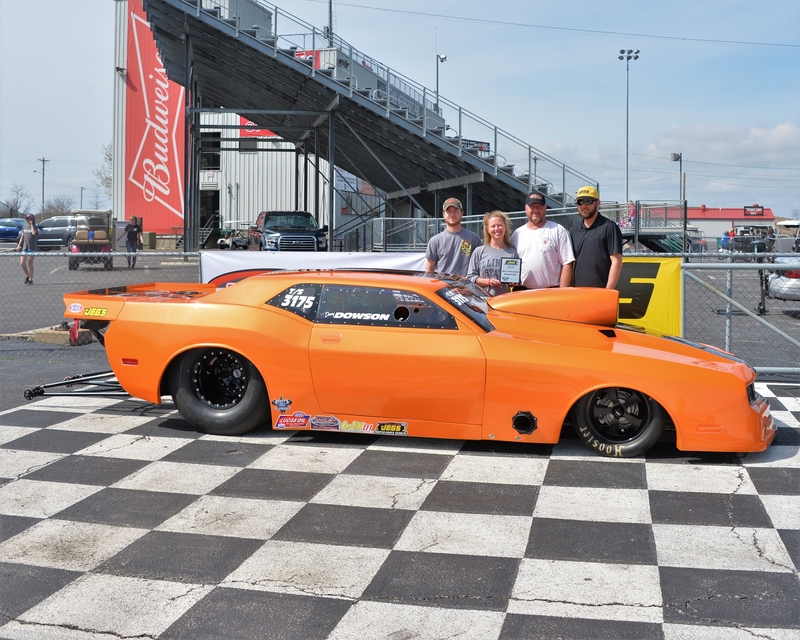 On Sunday, it was a one and run situation with the forecast later in the day not looking so promising. Ken Storey didn’t mind. He took his “Thunderstruck” Dragster straight to the top by a considerable margin. Storey out of Bebree, KY ran 4.505 on the 4.50 index with the next closest racer being the defending JEGS Super Quick Series champion, Jeremiah Hall running 4.520. Incredibly there were four divers to run 4.530 to round out the top six, including, Brandon Berkschneider, Josh Luedke, Dave Schutte and Jay Oakley. Forty-two participants took the tree for their only qualifier with the bump ending up at a 4.692 with three drivers running faster than 4.50.

Dennis Dowson’s immaculate 2014 Dodge Challenger was chosen as the Spectra 1 Best Engineered car for the JEGS Super Quick Series on Sunday. The bright orange and carbon rally striped Challenger definitely one that you will want to look at up close if you have not done so already. Dowson, out of Auburn, IL, unfortunately, had a problem with his nitrous not turning on during his only qualifier and ended up in the number thirty-three spot not making the field.

In the semis, it was Jay Oakley picking up the win over George Atchinson. Oakley left first and stuck the nose of his 2011 American Chassis Dragster out in front taking 0.016 of a second margin at the stripe. The other pair showcased Kegan Hagendorn against Mike Eggleston. Hagendorn was also able to get a considerable advantage at the tree over Eggleston and parlay that into a win taking 0.018 seconds at the stripe. The heartbreaker here was Eggleston ran dead on zero for the loss after leaving 0.066 to Hagendorn’s 0.003 reaction time.

Finally, the last race of the weekend was set. Oakley trying to seek revenge from yesterday’s baby breakout and Hagendorn trying to take a Wally back to Hermann, MO to send Oakley home empty-handed. Hagendorn had the advantage at the tree 0.018 to 0.027, but slowed up spinning a touch on the starting line thus giving Oakley room to back into him at the finish line. Oakley took a scant 0.008-second margin of victory in the final round. He celebrated with his family and friends hoisting his first ever NHRA Wally!