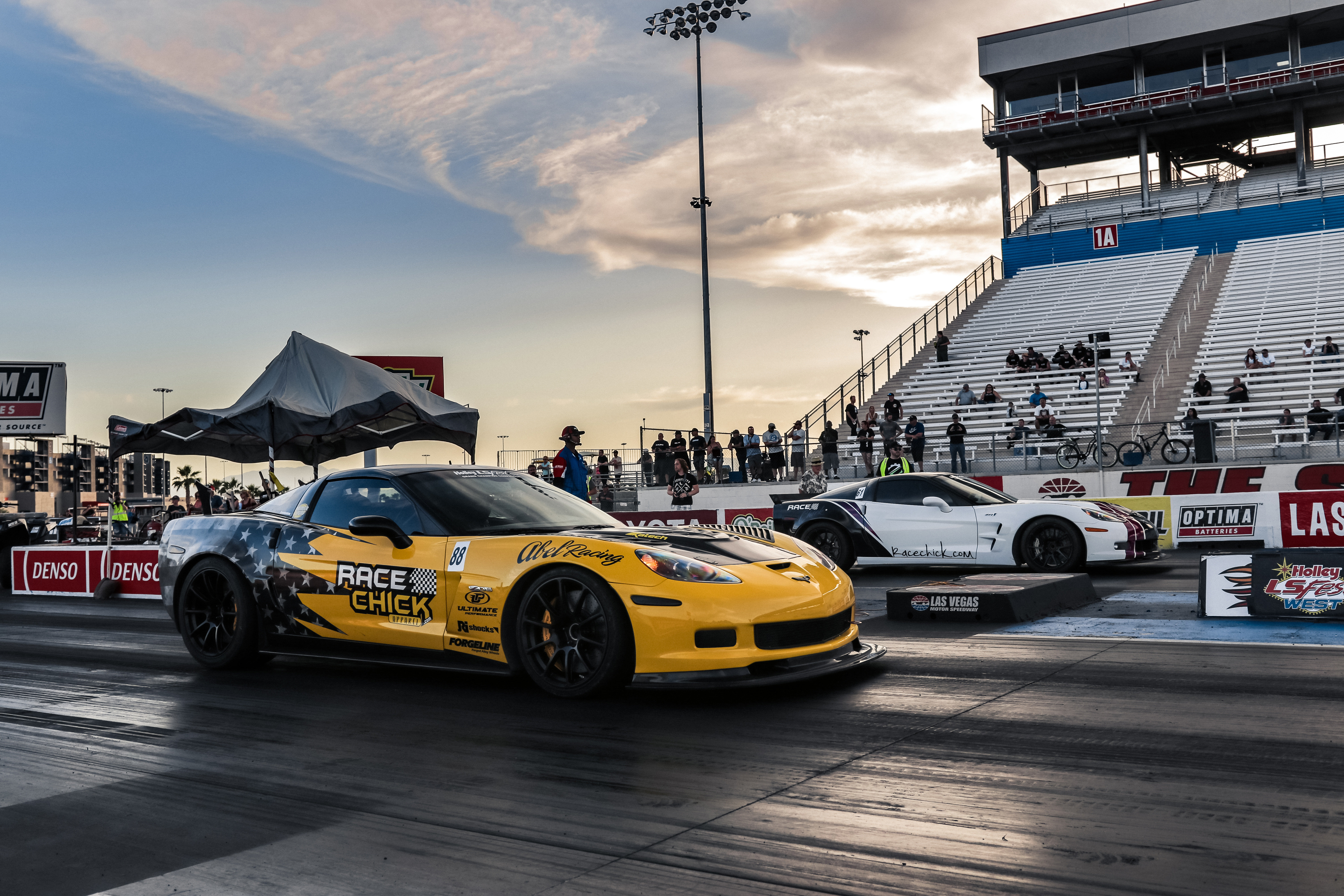 Driving an '06 Corvette, Willhoff bested Duke Langley's '02 'Vette on the the QA1/Lateral-G Autocross course with an overall time of 51.768 seconds – 26.960 on the first course and 24.808 from the second. Nobody else came in under 52 seconds, but Langley came close with a combined time of 52.009. Priestly, also in a Corvette, was just a tick behind Langley at 52.127, and Barnes just missed the podium with a fourth-best of 52.763. Eric Sheely rounded out the top five, and Wes Drelleshak was the only driver in the top nine in anything other than a Corvette; he took sixth with a time of 53.235.

The Baer Brakes/Super Chevy 3S Challenge also went to Willhoff, and again it was close. Willhoff, Logan Palmer, and Priestley were the only drivers with combined times under 26 seconds. Willhoff recorded the best overall time, including the best from each side – 12.68 on the left and 12.669 on the right. At the wheel of a Corvette, as were each of the top eight finishers, Palmer finished second, more than a half-second back, with a time of 25.907. Priestley claimed the final podium position with a 25.942-second run that left him .035-second behind Palmer and .139-second ahead of Barnes.

The JDP Motorsports/Pro Touring road course was Barnes' domain. He won with a best lap of 1:20.081, almost a full second ahead of Willhoff's second-best 1:20.872, laying down his best lap on his seventh of eight laps. Willhoff had his best run on lap 4 and took just one more shot at the track. Langley was almost a second behind Willhoff with a best time of 1:21.86. Willhoff's wife, Carrie, finished a strong fourth at 1:23.772, and Priestley was just four-thousandths of a second behind her in fifth place with a best of 1:23.776.

Craig Staley was the quickest on the drag strip, winning the MSD/Car Craft-backed event with the only 10-second E.T., a 10.77, in his '16 Corvette. Barnes ended up second with a best of 11.09, Priestley rounded out the podium finishers with an 11.25, Willhoff took fourth place with an 11.35, and Jake Rozelle finished out the top five with an 11.37. Though Wilhoff didn't secure a top three spot on the drag strip, the fourth-place finish was enough to win the Grand Champion crown by three points over Barnes and by seven points over Priestley. 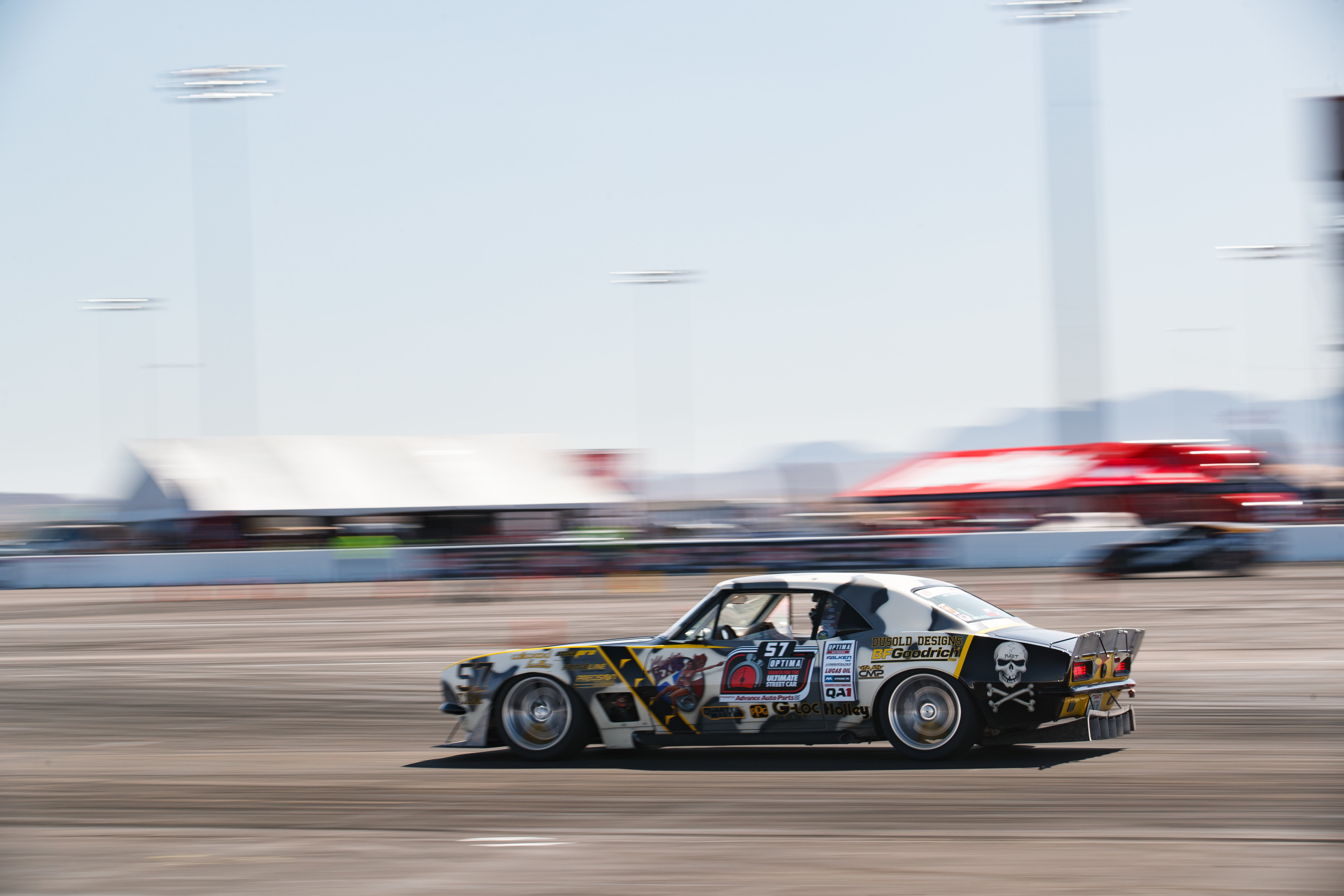 Mike Dusold continued his Grand Champion domination of LS Fest events this year, where he made it a clean sweep, winning everything in sight – Autocross, 3S Challenge, Road Course, and even Drag Race, where no car was within half a second of his unstoppable twin-turbocharged '67 Camaro. The talented Texan, who won LS Fest East in Bowling Green, Ky., last year, won the Vintage Grand Champion title with a total of 401 points, well ahead of second-place Nick Relampagos, who racked up 363 points with his '70 Camaro. Joining them on the podium was Greg Thurmond, who collected 354 points to edge out Robby Unser and Matt Alcala for third in the final standings.

On the QA1/Lateral-G Autocross course, Dusold beat out 40 other drivers with a combined time of 51.518 seconds – 26.747 on the first course and 24.771 on the second. Putting his venerable First Gen Camaro to the test, he made more laps than anyone and, not unexpectedly, got quicker and quicker as he went along. Dusold's best time on the first course came on his third-to-last shot at the track, but he was within three-tenths of a second of that on five other laps. His best time on the second course came in his 28th of 31 total laps, and he was within the blink of an eye of that time – eight-thousandths of a second – his last time around the course. Relampagos, the overall event runner-up, finished fourth in the Autocross with a time of 54.289, just behind Thurmond (53.521) and third-place Tom Kamman (54.237) and .273-second ahead of Unser.

Dusold dominated the Baer Brakes/Super Chevy 3S Challenge, winning by nearly a full second with a combined time of 25.636 seconds. His runs were nearly identical on both sides, with a best of 12.809 on the left side and 12.827 on the right. In each case his best time came in his final attempt, which included eight from the left side and six on the left. Thurmond, Relampagos, and John Lazorack were tightly bunched behind Dusold – all three with combined times between 26.584 seconds and 26.878 – and fifth-place Matt Alcala was the only other driver with a total under 27 seconds.

Dusold really shined on the JDP Motorsports/Pro Touring road course, where the twin-turbos on his Camaro opened up and gave him over a two second gap between the rest of the vintage class field. Instead of wearing out his machinery, he stopped after five laps, and his winning run of 1:22.954 was never threatened. Only two other drivers, Relampagos and Unser, bettered Dusold's worst lap (1:25.978), and those were the next two in the long line behind Dusold, with times of 1:24.981 and 1:25.309, respectively.

It was the same story on the Strip at Las Vegas Motor Speedway drag strip: all Dusold. The powerful Camaro proved superior in straight-line acceleration as he had starting, stopping, and turning in the other disciplines and covered the quarter-mile in just 10.66 seconds to win the MSD/Car Craft drag racing portion of the competition. Relampagos got second place with an 11.31, and Sean Thomas' '65 Corvette was third with a best of 11.54. Thurmond and Robert Gawlik were the fourth- and fifth quickest with respective times of 11.63 and 11.70. 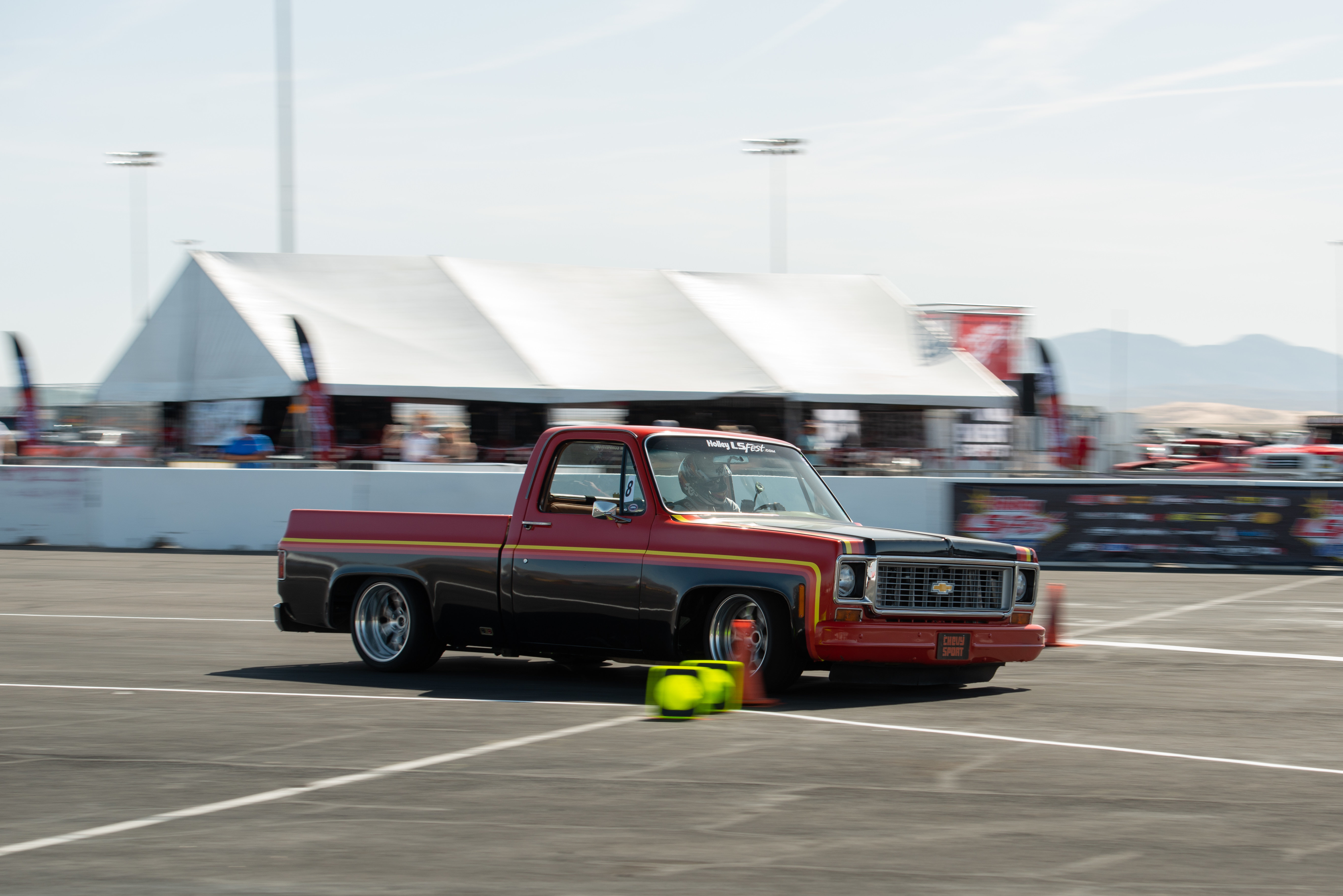 David Carroll drove to the LS Fest West Truck Grand Champion crown with a strong showing in all four disciplines – QA1/Lateral-G Autocross, Baer Brakes/Super Chevy 3S Challenge, JDP Motorsports/Pro Touring road course, and MSD/Car Craft drag racing. He won two of the events, and in the two he didn't win he placed second over the biggest field of trucks to date. Pat Sheely was relatively close to Carroll in second place (14 points back, 243 to 229), and Rob Phillips took third. All three drove Chevy C10 pickups – Carroll a '74, Sheely a '59, and Phillips a '72. Kevin Phillips turned in a fourth-place finish with his '91 Chevy S-10, and Claudia Robles wound up fifth with her '05 Chevy Colorado.

On the QA1/Lateral-G Autocross track, Carroll barely got the win over Sheely. The two went at it hard, making more laps than anyone – 24 for Carroll and 27 for Sheely. Carroll had the overall best lap time from each course, covering the first course in 28.582 seconds and 27.025 seconds on the second for an aggregate best of 55.607. Sheely was right on his heels and well ahead of everyone else with a best of 28.719 seconds on the left and 27.243 on the right. Rob and Kevin Phillips were almost exactly a second back in third and fourth place, respectively, with times separated by the invisible margin of one-hundredth of a second – 56.927 to 56.937 – and Robles, who was fifth in the overall final standings, finished fifth here, too.

In the Baer Brakes/Super Chevy 3S Challenge action, Carroll emerged victorious by a more comfortable margin, and again Sheely took second-place honors. Carroll won by almost a half-second, with the quickest runs from both sides, including 13.991 seconds on the left (the only time under 14 seconds by any driver on either side in the Truck category) and 14.078 on the right for a combined time of 28.069 second. Rob Phillips nipped Sheely for runner-up honors by the smallest of margins, exactly one-hundredth of a second (28.578 to 28.588). Just behind the podium finishers were Stephen Komlos and Robles who filled out the top five with times of 30.696 and 31.185.

It was Kevin Phillips' time to shine on the JDP Motorsports/Pro Touring road course, where he beat out the Grand Champion and everybody else with a winning time of 1:32.675. Carroll was right on his heels, about an eighth of a second back and a tenth of a second ahead of Sheely with a 1:32.802 despite running fewer laps (three) than any of the other title contenders. Rob Phillips was about a second behind the podium finishers with a time of 1:33.939 and Robles, as she did in the overall standings, the Autocross, and the 3S Challenge, finished fifth.

After finishing second to Carroll in the final Grand Champion standings, the Autocross, and the 3S Challenge and second to Kevin Phillips on the road course, Sheely beat 'em all on the quarter-mile, winning the MSD/Car Craft drag racing event with a solid 12.94 E.T. Carroll was the only other driver to run in the 12s with a right-there 12.98 for second place that secured him the overall Grand Champion title. With a 13.18 at the wheel of his '74 C10, Hondo Miller joined Phillips and Carroll on the podium. Robles edged fifth-place Luke Fields by seven-hundredths of a second, 14.82 to 14.89, for fourth place, her best finish in any of the four events that comprise the Grand Championship overall points format.