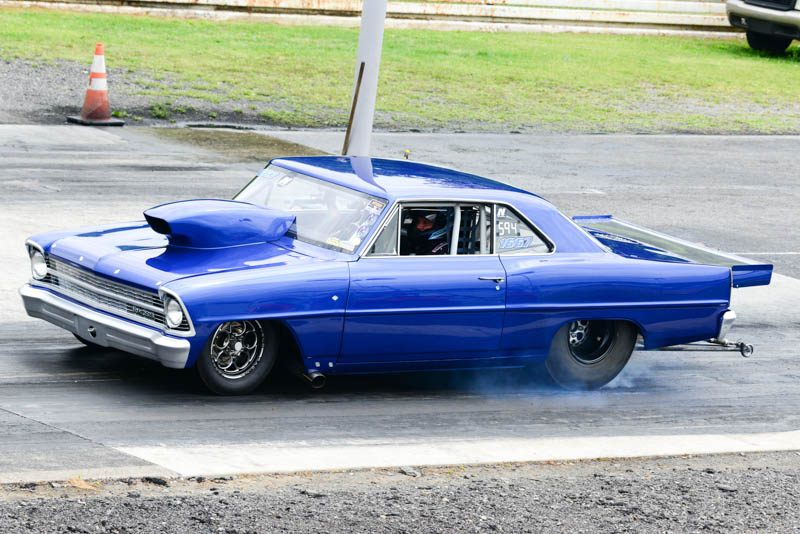 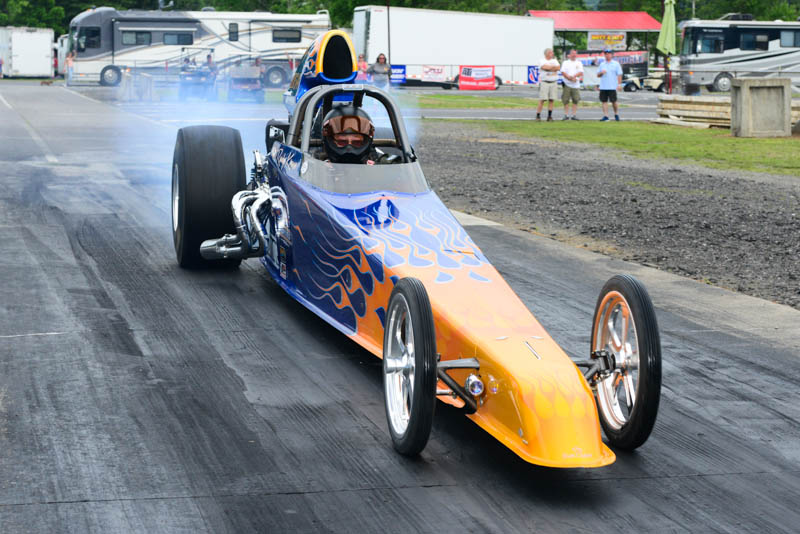 The original plan called for three days of big dollar bracket racing, an event that has been five years in the making, growing each and every year. This year, Mutt & Jeff Promotions chose to move their successful event north to central Pennsylvania at Beaver Springs Dragway. Mother Nature can be slightly fickle though.

In what was scheduled to be three solid days of sunshine and temps in the 70s, quickly turned on Friday night to an 80-percent chance of scattered showers for Sunday. Choosing to stay ahead of the storm, as it may be, Mutt & Jeff promoters Paul Burruss and Dylan Griffey made the executive decision to add Saturday and Sunday’s purses together and have racers in attendance vie for one big purse.

“We kept an eye on the weather forecast and decided not to have racers concern themselves with possibly sitting around all day Sunday watch it rain,” said Burruss. “Last night prior to the final round where Andy Dolan almost duplicated his last year’s Friday outing, an outing where he was both the winner and runner-up with his two entries. This year, he won last night’s race and was actually still entered with two entries late in eliminations.

“However, prior to the final, we discussed the Sunday weather with track owner Mike McCracken and we agreed to be proactive and change Saturday’s schedule,” said Burruss.

Much like yesterday, the Footbrake class cars were run separately down to one and then moved into the Super Pro or Box class semifinal. The final in Footbrake paired Marty Flegal and John Binkle with a $1,750 bonus going to the winner. In that final, Binkle ran under his dial to move Flegal; who is no stranger to big money bracket racing; into the semifinal. 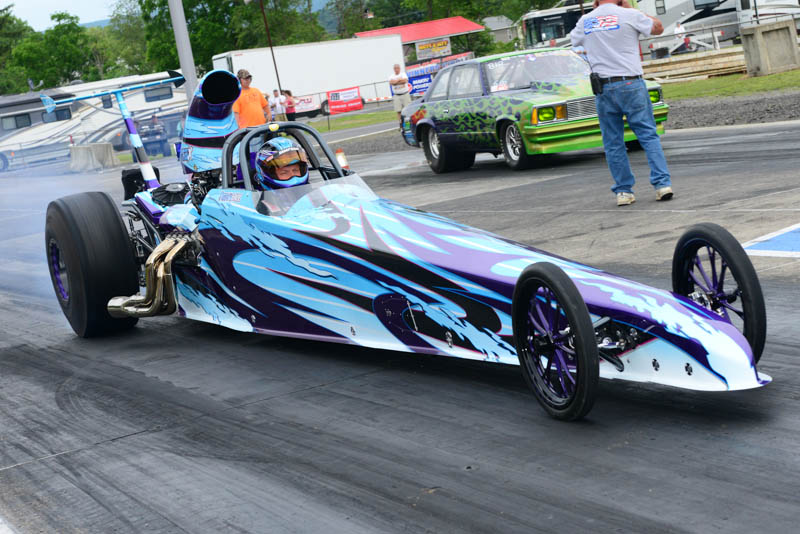 Before that semifinal could happen, there were five cars left in Super Pro; Best Appearing Dragster winner Tony Hill on the bye run, Jimmy Zimmerman, Denny Shaw, S&W Race Cars’ Randy Krause, and the lone door car of Beaver Springs Dragway regular Kevin Little. And the survivors were Krause; who defeated Little’s door car; Zimmerman and Hill who matched up with the last remaining door car; a Footbraker no less; in Marty Flegal for the semis.

Final four, three dragsters and one door car which turned a little anticlimactic when Flegal turned it -.002 red to advance Krause and Zimmerman’s car broke in the staging lanes to allow Hill a free ride to the $20K final.

In the final, both Krause and Hill turned in stellar reaction times but it was Krause who ran under his dial to hand the $20K check to Hill.

And so ended Mutt & Jeff Promotions Bracket Race, version five. “We can’t thank everyone enough who showed up and supported our fifth event,” said Burruss. “It’s been quite a ride for us and our thanks comes when racers continually stepped up to us all weekend long and told us what a great event it was. But had it not been for them and the great track personal here at Beaver Springs Dragway, we could not have done it.” 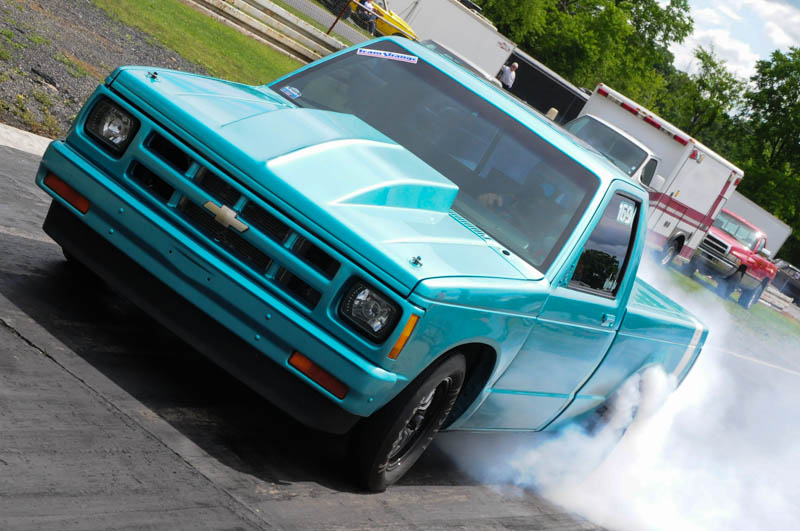 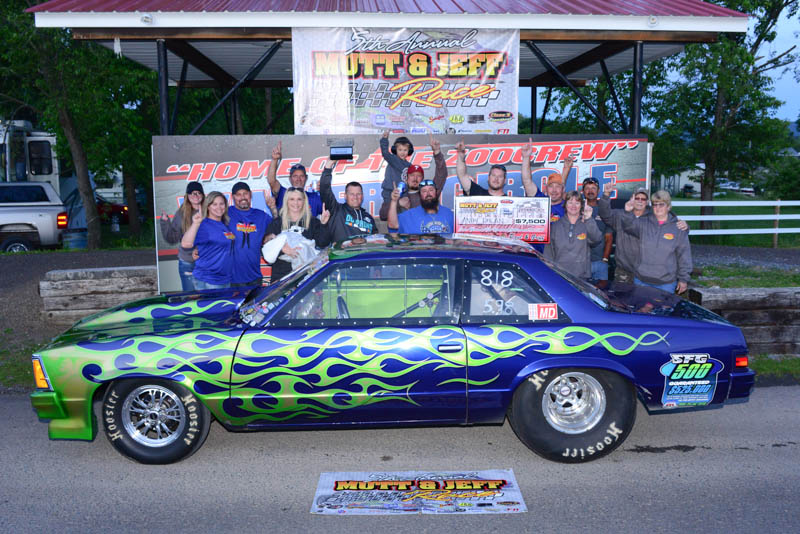 For the fifth straight year, Paul Burress and Dylan Griffey, a.k.a. Mutt & Jeff Promotions, brought their high dollar bracket race north to Beaver Springs Dragway in central Pennsylvania. New track owner Mike McCracken has made a lot of improvements to the facility and the pair of Mutt & Jeff wanted to be a part of the improvements.

Over the past five years, the event has grown bigger each year and Burress and Griffey wanted to give their customers a good experience. Two classes of competition; Super Pro and Footbrake; combined to bring a big field to the event. Three days of high dollar bracket racing began today, with the Footbrake class racing down to one winner with that winner inserted into the next round of Super Pro. Door cars and dragsters also were run separate until the ladder round of 16 or less cars.

Footbrake winner for today was Rory Krupp when Bob Flick red-lighted in the Footbrake final. In addition to receiving a $750 bonus, Krupp moved into round seven of the Super Pro class. 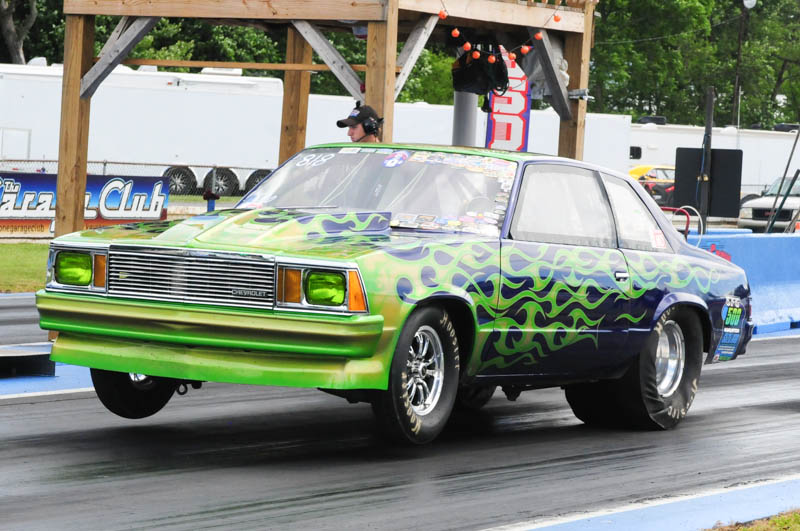 That round set up the semifinals with Dolan, Nolf, Dragon and Krupp. Three door cars, and the altered of Dragon. Dragon’s almost Cinderella story of two big wins in a row came to an end both he and Dolan ran dead-on their dial-ins with the slightest margin and the win going to Dolan. In the other half of the semis, Nolf’s car sputtered on the starting line giving Footbrake winner Krupp the win.

For the final, it was Footbrake against delay box with both racers set up on kill. But it was over before it started when Krupp turned it -.002 on the red side. Ironically, Dolan also turned it -.002 red, but due to their dial-ins, Krupp did it first which allowed Dolan the take the money back home with him to Martinsburg, West Virginia`.

Still left for the weekend was a $15K-to-win Saturday with a $5K on Sunday. Although, officials have watched the weather feverishly and it appears Father’s Day Sunday will be a washout as far as Mother Nature is concerned. Being proactive, they announced tonight a change in the schedule with Saturday being a combination of both Saturday and Sunday’s purse making Saturday a $20K-to-win race. In addition, with the two purses added together, the buyback price for first round runner-ups would have been $160, but officials have chosen to lower that to $140. This allows racers to save a day of possibly sitting in the rain, waiting to race. 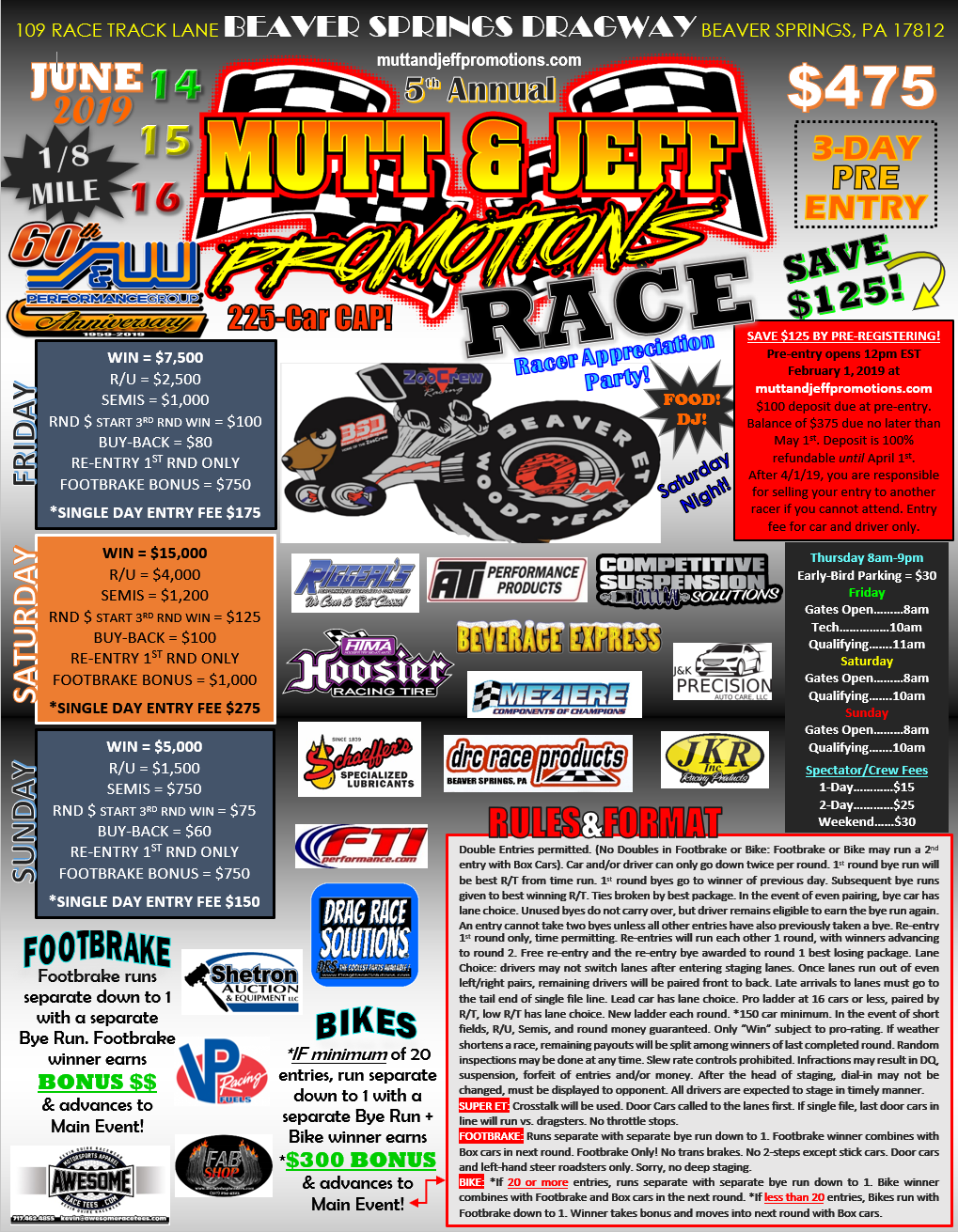 It began as somewhat of a joke, but for all the years Paul Burruss and Dylan Griffey have been friends, they’ve traveled together and very easily been known as Mutt & Jeff in relation to the long-running comic strip characters, two mismatched gamblers. This week, for the fifth year in a row, the pair are gambling with their Mutt & Jeff Promotions Race, this year moved north from its original home in Maryland to Beaver Springs Dragway in central Pennsylvania.

“Each year,” says Burruss, “the race has grown bigger and we wanted to move it to a new venue in order to give our customers a better experience. We had a good relationship with Beaver Springs new owner Mike McCracken and he’s made a lot of improvements to the facility; improvements which will only make the already great facility better.”

Beginning on Thursday of this week, race rigs will begin moving into the central Pennsylvania facility in preparation for the weekend’s activities. On Friday morning, qualifying and time trials will begin at 11:00 followed by eliminations later in the day with one person walking away with a $7,500 check for their winning effort.

On Saturday, the ante is upped with $15,000 going to the winner, and on Sunday, the action resumes with a $5,000-to-win race. Saturday night a Racer Appreciation Party will take place, feeding all in attendance along with a DJ providing music.

While only one class of cars; Super Pro; will be run, Footbrake racers will run separate from the Super Pro cars with the last remaining Footbraker will be awarded bonus money and then advanced into the following round of the Super Pro class.

“We’re pretty excited to get this going,” said Burruss, “and we have a whole list of sponsors already signed up to award random and round prizes.”