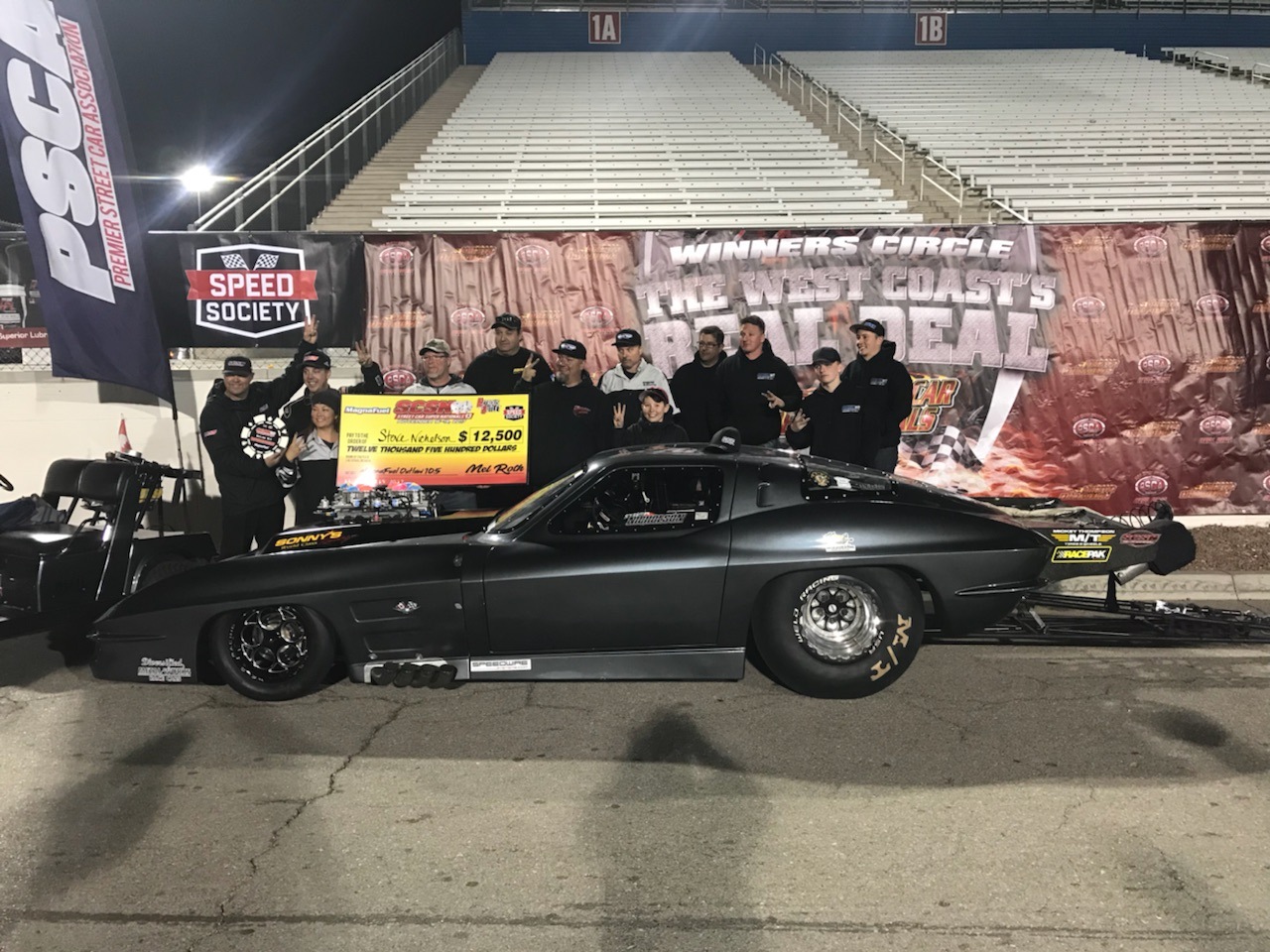 Vancouver-based 10.5 driver Steve Nicholson is as passionate about racing as they come. His willingness to travel long distances just to race and his competitive drive to be successful are evidenced in the way he runs his program. So it’s no surprise that before making the switch to Sonny’s Racing Engines, Nicholson did his research. He talked with other racers and professionals for over a year before deciding that Sonny’s was the way to go.

His first race out with his new Sonny's 959 EFI engine was the Las Vegas Street Car Super Nationals. “We tested it a little bit and then picked at it slowly,” Nicholson said of the engine. “It came around every round to our advantage. It was our first ever weekend where everything was flawless. We didn’t have anything go wrong. The motor stood up to everything and everything else worked great. It just went on repeat and that was nice. We made 12 hits on the car. It just kept getting faster and faster. Everything we asked it to do, it did. It was quite impressive.”

Nicholson, along with tuner Rob Guazzaroni, subsequently dominated the 10.5 class, winning the event.

“This switch to Sonny’s, we’ve all agreed, was probably the best thing that’s ever happened to the car,” continued Nicholson. “The support and everything we get from them is unbelievable. Todd’s unbelievable and so is Sonny.  They’ve stepped up from day one. The whole weekend of racing, Todd was on my computer the whole time. I’ve dealt with a couple of bigger engine builders and they’ve never done that. It’s hard to even get a hold of them, let alone them coming to you and asking you what you want to do for a tune up and get on your computer and start working their magic.”

“The guys at EFI Technology came on board and really helped,” said the third generation racer. “[Switching to EFI] was a recommended Sonny’s deal. I get the same support from EFI Technology, as I have from Sonny’s. It’s an outstanding product, too. We haven’t had any issues. The stuff’s been flawless from day one since we wired it.”

Nicholson not only drove away from Las Vegas as the 10.5 champion, but also as the world’s fastest nitrous oxide assisted 10.5 car.

“It is huge,” Nicholson said of his recent accomplishments. “And that’s not even us getting after it yet. I had Hutch at Hutch’s Transmission build me an awesome trans to hold all this power, and to top it off, I got a big congratulations from Billy Glidden; it doesn't get any better than that."

“I wouldn’t be here without him, for sure,” Nicholson said of his tuner. “I would be nowhere without him and Todd. We’ve always put our two heads together and now with Todd and Sonny’s, it’s just crazy. I’m very blessed.”

This latest Street Car Super Nationals victory makes Nicholson’s third. He’s the only 10.5 driver to win three, another remarkable accomplishment. It’s not often someone who doesn’t come from an area with deep racing routes makes such a big splash in the industry, but the partnership between Nicholson and Sonny’s Racing Engines foretells even bigger and better things yet to come.