LEGENDS: THE SERIES - THE LEGEND OF WARREN JOHNSON 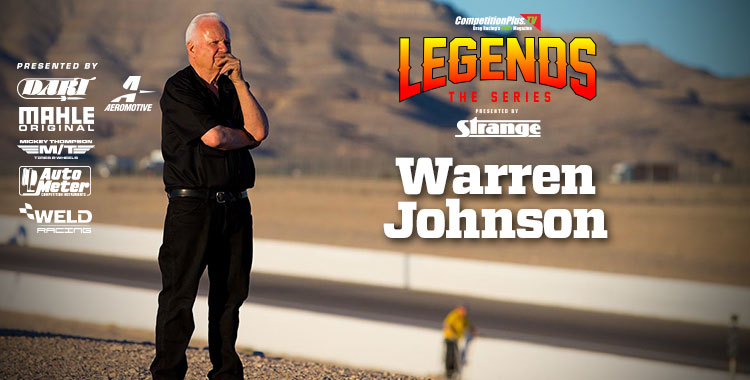 Warren Johnson won 97 national events and six championships at the wheel of a series of Chevrolets and Oldsmobiles during the golden age of NHRA Pro Stock racing. Yet, even though he has hoisted more NHRA trophies than any pro racer with the exception of John Force, he never fancied himself a driver.

In this episode of Legends, the Series, season four, WJ gets candid about his career and those who helped shape it, from Dr. Zook to Bob Glidden, talks about being “vertically challenged” and explains his simple philosophy of life.

“If somebody wants to know something, just ask me,” he said. “I’ll give you an honest answer, at least from my perspective. It might not necessarily be right (but) I try to be as honest as I possibly can.

“I came from a frugal background,” he said of his years growing up on a northern Minnesota farm. “We had to repair everything ourselves, my brother and myself. That’s where I got my work ethic. (We) just worked till we got the job done.”

Johnson also learned car control racing on the ice and snow. It’s a skill that would serve him well in a driving career spanning four decades although he admits that he “probably should have gone circle track racing instead of drag racing.

“Racing cars was strictly a way of making a living for me,” he said. “I could have been better at it, obviously, but I was tenacious and dogmatic enough that I lasted as long as I did and made a good living at it.”

As for regrets, he has very few.

“If you enjoy what you’re doing, the ‘what ifs’ don’t count,” he said. “I still enjoy making parts and doing development work. The only time I ever got discouraged was when I couldn’t figure something out fast enough.”

So, sit back, listen and learn as “The Professor” tells all.