WHEN YOU'RE SO POPULAR SANTA WANTS YOUR AUTOGRAPH 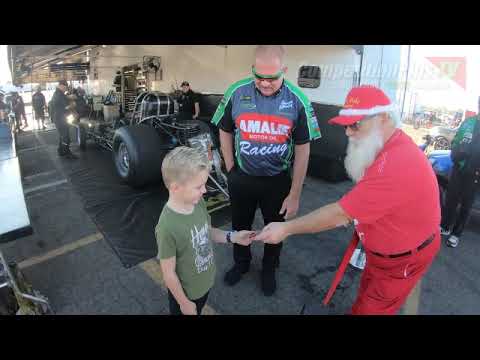 Cameron McMillen reminds us of all of the innocence of a child. The six-year-old budding drag racer has been a hit with the drag racing world, so much so his famous Top Fuel driving, and Indianapolis-winning dad Terry McMillen is an afterthought.

On Saturday afternoon, at the NHRA Auto Club Finals, Cameron was summoned to the ropes to meet a fan. Mind you this was no ordinary fan. This was the white-bearded man, who's best known for his world-traveling sleigh. There was no traditional heavy suit; just a red hot rodder's t-shirt, with a pair of red jeans and a ball cap out at the drags for a day of horsepower.

You'll smile when the jolly man meets the driver of his choice and walks away with an autograph. In the end, he might have scored his old man some parts and a few goodies for himself.