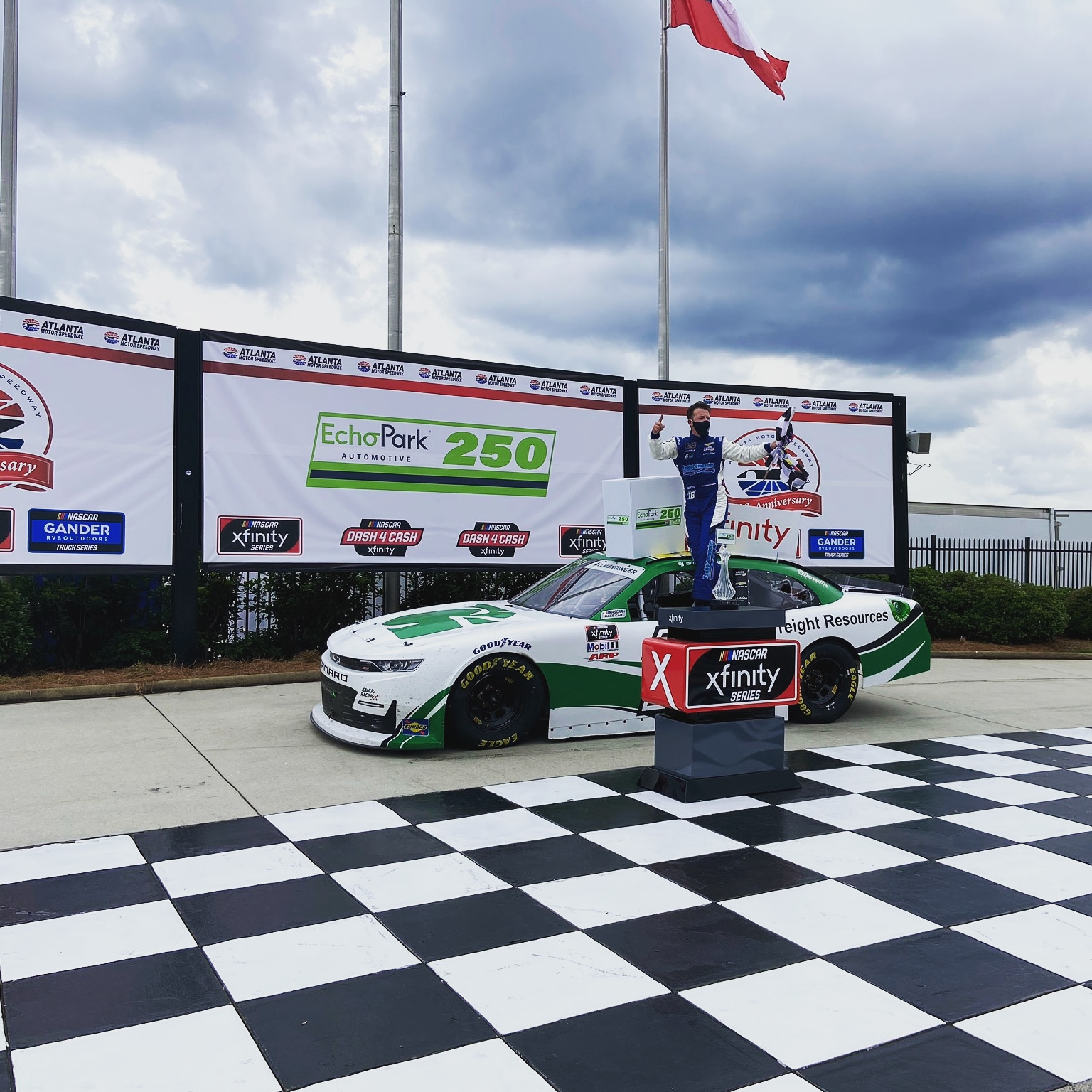 Yes the 38-year old Allmendinger won, and he did so convincingly; pulling away from the field in the last laps, competition that included Harrison Burton, a highly-motivated Justin Allgaier, another of Allmendinger’s Kaulig Racing teammates Ross Chastain, Brandon Jones, Chase Briscoe and Anthony Alfredo who rounded out the Top-10.

The Top-10 work was some solace to Allgaier and Briscoe who were two of the strongest cars all afternoon. Briscoe led 40 laps and Allgaier ran consistently in the Top-5  - but were both penalized for speeding on pit road on a final stop with 39 laps remaining. They came out of the pits first (Briscoe) and second (Allgaier) before getting news of the penalty which dropped them  to 25th and 27th -  - respectively, for that restart.

Allmendinger had come out of the pits third, so he inherited the lead and never looked back.

“I just felt like we needed track position the whole time so once we go that lead it was about getting a good re-start,’’ he said adding, “Had to kind of pace myself and the last 15 laps beg for no yellows.’’

A former IndyCar Series champion contender Allmendinger was highly regarded for his road course skills when he came to NASCAR. He earned his only NASCAR Cup Series victory in 2014 on the Watkins Glen road course and had three previous Xfinity Series wins – on road courses at Road America, the Mid-Ohio Sports Car Course and the Charlotte ROVAL.

Austin Cindric was also penalized for speeding on pit road in that final series of stops. The driver of the No. 22 Penske Racing Ford led a race high 68 laps and looked like the car to beat early – winning both the 1st and 2nd stages – his first of the year. His car was so dominant in the early laps that he won the first stage by nearly 9-seconds over Chastain. He finished 16th.

Briscoe beat Cindric out of the pits during the 2nd Stage break and the two Ford drivers kept one another honest with Chastain right there followed by the JR Motorsports cars driven by Hemric and Allgaier. Hemric’s fourth place finish was his fifth Top-10 in seven races he’s competed in this year for the JR Motorsports team.

It was also a strong consistent day for Allmendinger’s teammates, Haley and Chastain. Haley rebounded for a pit road penalty early in the race to rally to his third-place finishing position. Chastain ran among the Top-10 for most of the day. He finished sixth in the NASCAR Gander RV & Outdoors Truck Series race earlier Saturday afternoon.

The Dash 4 Cash victory for last week’s Bristol winner Gragson was a feel-good ending for the 21-year old who said he ultimately learned a lot racing Allmendinger. The driver of the No. 9 JR Motorsports Chevrolet started on pole position and also ran among the Top-10 consistently having to rally from an earlier race penalty as well.

“It’s an incredible opportunity what Xfinity is doing with the Dash 4 Cash program,’’ Gragson said. “It’s quite the privilege and the honor to be able to compete for $100,000.

“We had a good run today. Man, I ate AJ’s bait there at the end. He started saving his tires and thought he had burnt his tires up. Just got beat by his experience. He’s a phenomenal driver.’’

The Xfinity Series championship standings remain unchanged for positions one through six. Briscoe retained his led by four points over Gragson. The rookie Burton is third, 32 points back followed by Allgaier, Chastain and Cindric.

The series next moves to South Florida where the Xfinity Series will have a doubleheader – two  250-mile races at Homestead-Miami Speedway; one on Saturday (3:30 p.m. ET) and one on Sunday (noon ET).