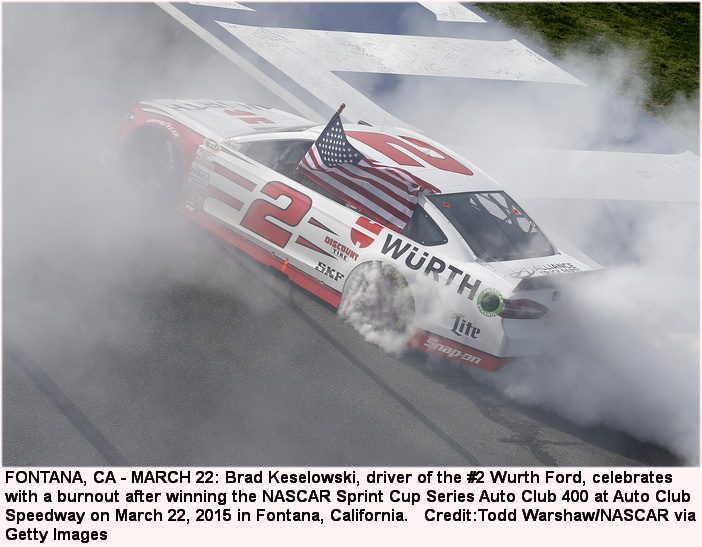 While teammates Kurt Busch and Kevin Harvick thought they were the two battling for the win in the Auto Club 400 at Auto Club Speedway Keselowski used their battle to grab the lead and his first win of the 2015 season.

“At the end we caught some breaks, made the most of the breaks we caught,” stated Keselowski. “That was kind of the story of our race.”

Keselowski's crew chief gambled on the final pit stop taking on four tires while Harvick and Busch took on two right side tires. Two left side tires made all the difference for Keselowski.

“Obviously it was a big win for us today,” said Paul Wolfe, crew chief of the No. 2 Miller Ford. “We were a sixth  or seventh place car. When I heard guys were going for two tires, I told Brad over the radio, If we're going to win this thing, I think we're going to need four.  I didn't feel we were going to be able to pass those guys on equal tires.  At that point, it's like, Let's go for the win.”

Keselowski wasted no time charging to the front at the waving of the final green flag and Harvick was able to take advantage of a close run into the way by teammate Busch to gather his seventh consecutive first/second place finish.

The win means both Penske Team cars are now in the Chase. Penske was pleased with the step.

Well, to have both cars in the Chase is exceptional” stated Penske. “I think last year we had that opportunity to get in early. It certainly paid off as we got through the season. We can do other things as we try to explore the outer boundaries.”

While pleased with the win Penske was quick to admit there are still challenges being faced by the organization.

“(We were) great in the pits today, which you need to be because of competition.  Still we're chasing the 4 car.  As you know, he's been awful hot.  To me, two cars in the Chase at this time, I think we're going in the right direction.”

Martin Truex Jr and the Furniture Row team also appear to be going in the right direction. While they have not won, the quality of their runs is better than ever.

"We were way off after Saturday's final practice but came out today and did what we needed to do,} said Truex. “I am proud of the guys for going to work last night and not being afraid to take a big swing at the setup. To go out there and run with a completely different setup than we had Friday and Saturday and come away with an eighth-place finish really says something about this team. We never give up and believe in each other.” 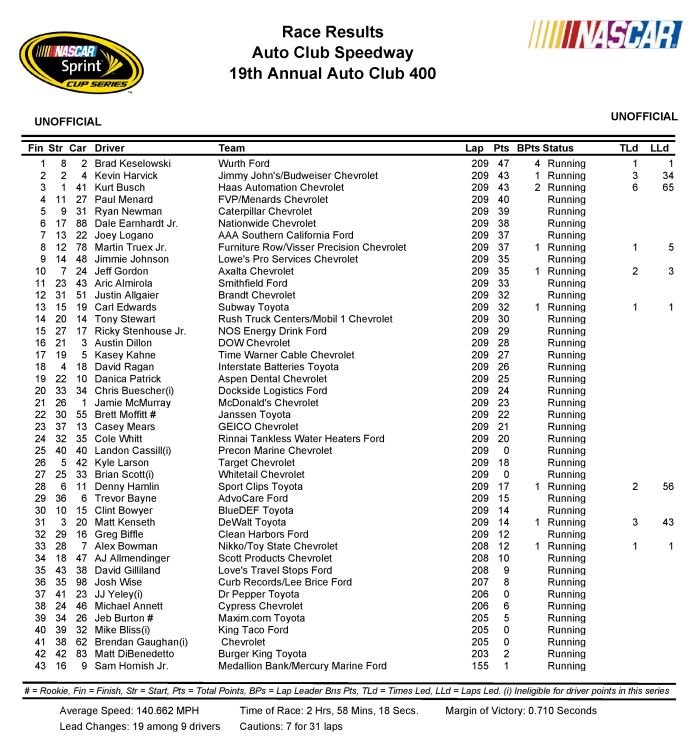 VICKERS TALKS - After feeling poor in the middle of the week, Brian Vickers was tested and it was discovered he was once again suffering from blood clots which is a severe condition when driving a race car.

Vickers talks about the issue and takes questions concerning his future as a driver. 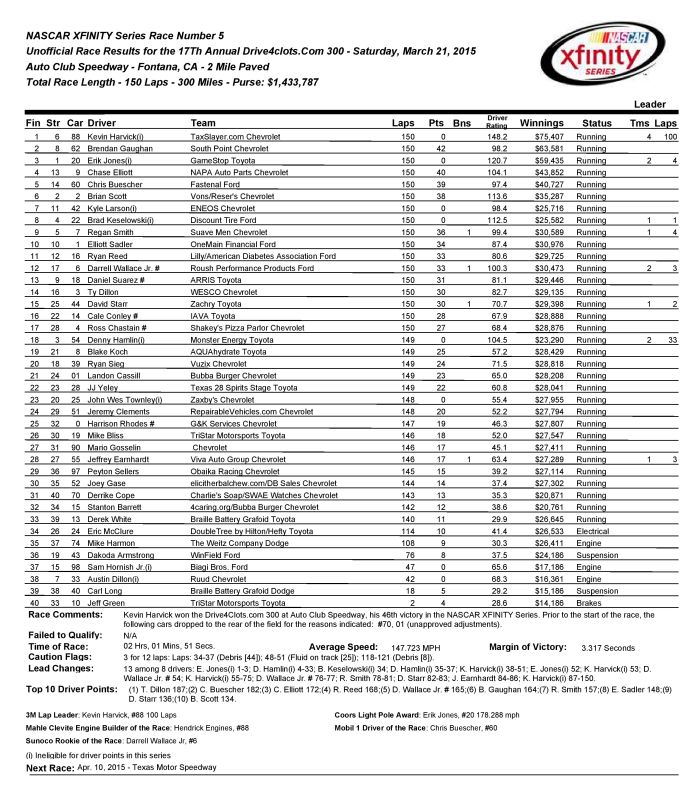 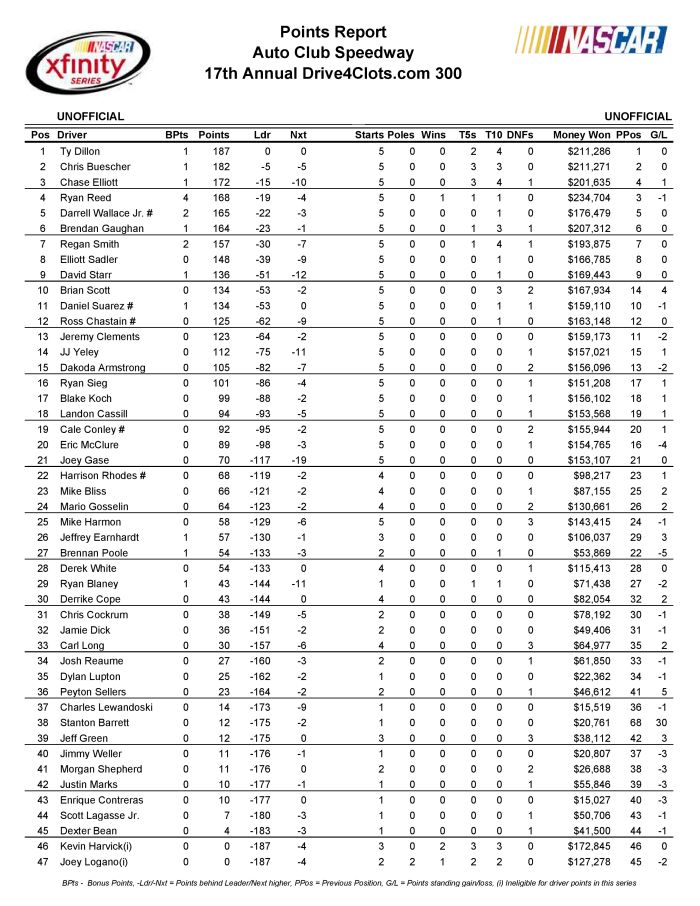 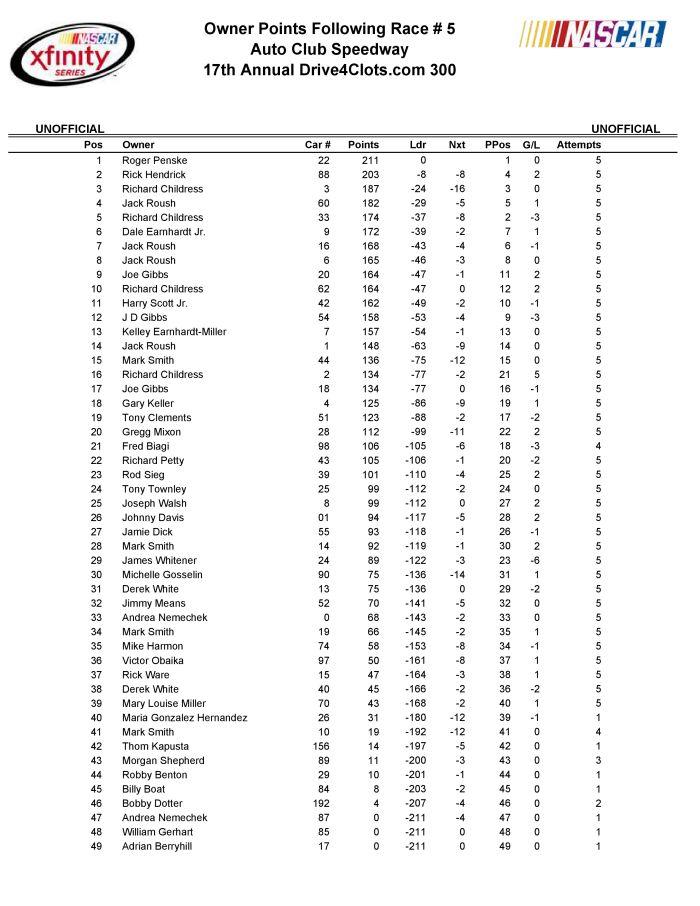