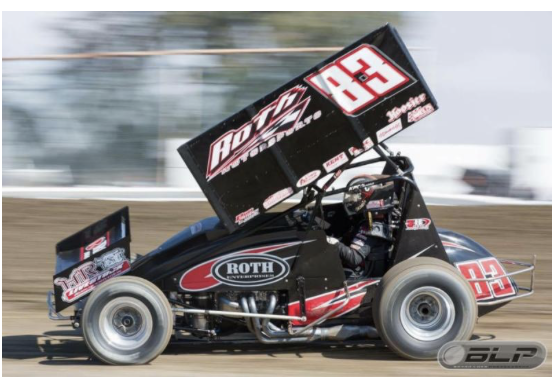 Dominic Scelzi is racing for a championship next year for the first time in several seasons.

Scelzi will drive for Roth Motorsports as the team tackles the entire King of the West-NARC Fujitsu Series schedule along with racing in the famed Trophy Cup and numerous other 410ci and 360ci winged sprint car events in his home state of California.

"To be able to race the No. 83 car in California is a dream come true," he said. "I have big shoes to fill. Kyle (Hirst) won about everything you could in California. I'm hoping he will continue to race down the line because I've always enjoyed racing with him. For the entire time I've been racing sprint cars he's been in the No. 83 car. I'm excited for this new chapter in my career."

Scelzi has three career King of the West-NARC feature victories and he has finished in the top 10 in the series championship standings three times. Scelzi was leading the championship standings midway through the 2015 season when he sustained a back injury that sidelined him for several weeks and relegated him to a career-best eighth-place placing, which was tied with his 2014 result.

"I'm excited to join a team that contends for the championship every year and that's our goal for 2019," he said. "I know the equipment and experience will be there so I feel very confident going into next season."
Scelzi estimated the Roth Motorsports team will compete in approximately 30-to-35 races and he anticipates matching that number in his family owned sprint car.

"We will run the World of Outlaws races on the West Coast in both the spring and the fall," he noted. "We'll also go to the Midwest during the summer like we have the last couple of years. The time we spend out there will be similar, but the number of races will be cut down because I'll fly back to race for Roth Motorsports in California several times.

"I'm really looking forward to 2019 and feel like I have a tremendous opportunity to win races in both our family car and with Roth Motorsports. I'm extremely grateful for the opportunity provided by Dennis and Teresa Roth as well as Todd Ventura."