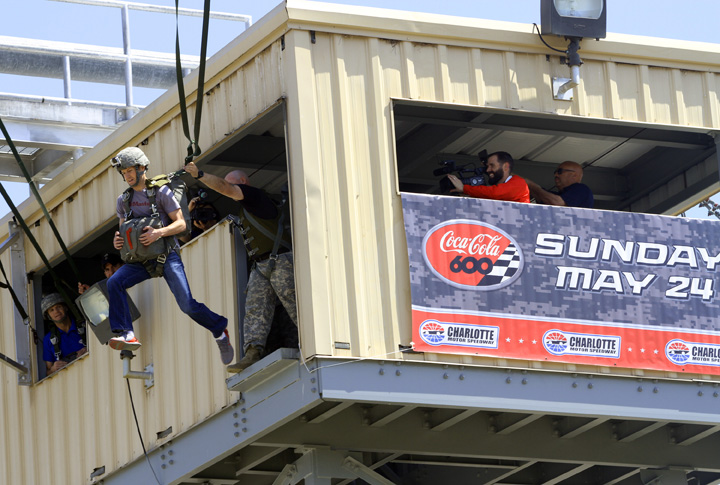 Three-time Coca-Cola 600 champion Kasey Kahne traded his fire suit and racing helmet for tactical gear as he trained alongside soldiers from Fort Bragg in preparation for the biggest Memorial Day Weekend celebration and Charlotte Motor Speedway’s pre-race Salute to the Troops before the Coca-Cola 600 on May 24.

During the day-long training session, Kahne, along with Miss Sprint Cup Julianna White and NASCAR on FOX analyst Kenny Wallace simulated paratrooper training by descending from a 32-foot jump tower and took turns firing a high-powered Howitzer like those featured in Coca-Cola 600 pre-race festivities.

“The training the guys go through and the passion these guys have for it, they’re very good at what they do,” Kahne said. “It’s similar to racing in a way, but it’s way different.

“I wasn’t exactly sure what to expect. The Howitzer was unreal – the power. I was scared to pull the trigger on that thing. Really scared. To be able to race Memorial Day Weekend, it always means a lot to me. It’s unbelievable to be part of those races and to see what Charlotte does with all the military; and it’s neat to be part of that.”

In addition to similar exercises, the Coca-Cola 600 pre-race Salute to the Troops will include a vintage warbird air parade, a flyover featuring four F18s, a FastTrax aerial display and patriotic music by the 82nd Airborne Chorus, Lee Greenwood and a Fort Bragg bugler, among other military tributes.