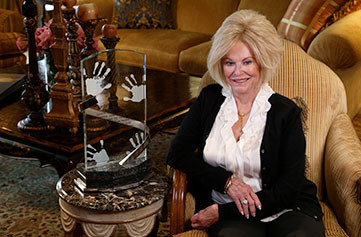 Four finalists have been chosen for The NASCAR Foundation’s fifth annual Betty Jane France Humanitarian Award presented by Nationwide, which honors volunteers from across the country who dedicate themselves to children’s causes in their communities. Through December 3 at 11:59 p.m. ET, fans have the power to decide the winner by voting for their favorite champion for children at NASCAR.com/Award.

This year’s finalists include Bob Bowler of Special Olympics North Carolina, Stephanie Decker of Stephanie Decker Foundation, Carl Flatley of Sepsis Alliance and Jeff Hanson of Children’s Tumor Foundation. The national winner will be announced on Dec. 4 during the 2015 NASCAR Sprint Cup Series Awards at Wynn Las Vegas at 9 p.m. ET on NBCSN.

The NASCAR Foundation will donate a total of $175,000 to the charities of the finalists – with the winner’s charity receiving $100,000 and remaining finalists’ charities receiving $25,000 each. The winner will also receive a 2016 Ford Fusion given by the Official Car Sponsor.

The Award was established in 2011 to honor The NASCAR Foundation Founder and Chairwoman Emeritus Betty Jane France’s passion for service and volunteerism. Since its inception, the Award has donated $700,000 and impacted over 52,000 children nationally.

“This year’s finalists are ‘raising the bar’ for our award,” said Betty Jane France. “They have national stature but are community-oriented. Collectively, they have done an incredible amount of important work toward improving the quality of life for children in need.

“As we now go through the online process, our finalists will increase awareness of both the award and The NASCAR Foundation overall. They have wonderful, inspiring stories to tell, which is not surprising because they are wonderful people. We are very proud to call them our 2015 finalists.”

This marks the first year of The NASCAR Foundation’s partnership with Nationwide, which has a deep commitment to be “More Than a Business.”

“Nationwiders care. We volunteer in our communities and we help our members feel safe and protected. The Betty Jane France Humanitarian Award embodies those same values and we're proud to be partners in recognizing the giving spirit of others,” said Terrance Williams, chief marketing officer of Nationwide. “We congratulate this year’s finalists and thank them for their selflessness and leadership.”

Fans are encouraged to join the conversation on Facebook at www.Facebook.com/NASCARFoundation and Twitter using the hashtag #BJFHAward.

Following is additional information about the 2015 BJFHA finalists:

Stephanie Decker (Sellersburg, Indiana) was faced with serious adversity in March 2012 when a tornado struck her home and threatened to take away all that she knew and loved. Having lost both of her legs after shielding her children from debris, she started the Stephanie Decker Foundation to help children with prosthetics get involved in sports and, in the process, provide access to the best prosthetic technology available. Decker has become a motivational speaker and an advocate, having gone to the Kentucky State Senate to fight for a bill that would require insurance companies to cover new and refurbished prosthetics.

Carl Flatley (Dunedin, Florida) lost his 22-year-old daughter Erin in 2002 after contracting sepsis – an often-deadly systemic infection – following a routine outpatient surgical procedure. Determined to prevent others from the same fate, Flatley founded Sepsis Alliance in 2007 to increase awareness and encourage medical facilities to establish sepsis protocols. Awareness is crucial as sepsis is preventable and treatable, and the cause of 18-20 million deaths globally each year. Flatley has established educational programs and an endowment to provide sepsis training for young physicians in Florida. According to Sepsis Alliance, the organization has increased awareness in the U.S. from 19 percent in 2003 to 44 percent today.

Jeff Hanson (Overland Park, Kansas) was only 6 years old when he was diagnosed with optic glioma, a tumor that attacks the optic nerve that is caused by the rare genetic disorder neurofibromatosis (NF). After undergoing chemotherapy and radiation treatments, Hanson was legally blind at the age of 12. During his 2005 chemotherapy treatments, he began painting bright, bold colors on note cards, perfectly suited for someone with limited vision. Hanson turned his paintings into a fundraising platform and has since generated more than $250,000 for the Children’s Tumor Foundation and more than $1.3 million for charities worldwide.