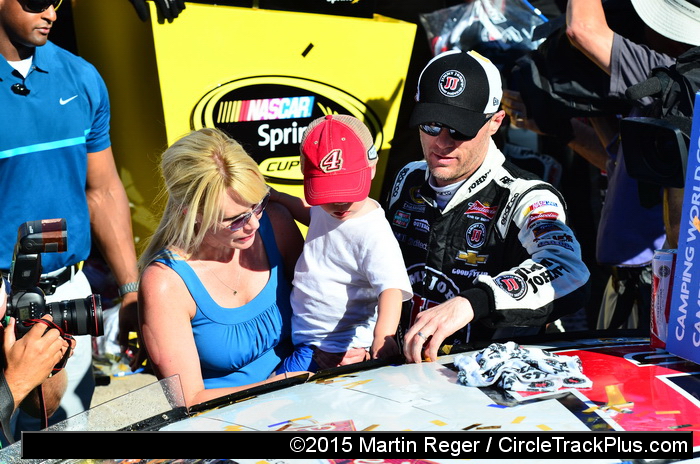 Kevin Harvick survived a pair of late race restarts to win the CampingWorld.com 500 Sunday at Phoenix International Raceway and extend his hot streak of historical proportions.

Starting from the pole, Harvick led 224 of the race's 312 laps but late race cautions brought the field back together erasing large leads he had accumulated. On the race's final restart, Jamie McMurray, driver of the #2 Cessna Chevrolet, jumped out to a quick lead but Harvick battled back to lead the remainder of the race.

"We have a lot of things different than what we had last year and we had that experience of everything that we did to race for the championship," Harvick told TV reporters in Victory Lane. "I just feel like the bond between this team is really special. Rodney Childers and myself and the engineers and everybody gets along so good. It’s almost scary how well things are going. You don’t want to talk about it too much because you want it to keep going."

Harvick, who has led more laps in the history of Phoenix International Raceway, now has seven career wins at the one mile Arizona track. Harvick also becomes the first driver since the 2004 2005 Sprint Cup seasons to win four consecutive races at the same track when Jimmie Johnson accomplished the same feat at Charlotte Motor Speedway.

“I think at this point everybody just expects you to keep winning,” said Childers “That's what makes it hard on all of us.  Yeah, I feel like we've got a team that can do that. We have a driver that can do that.  We have the resources to do that. The more you win, the more you expect out of yourself and the more pressure you put on yourself.
When we left Vegas last week, he made a point to say, I want to win all three of these West Coast races.  I think anybody that knows Kevin Harvick, if he puts his head to something, he's going to try to make it happen. Just like we talked about a minute ago, these races mean a lot to him.  He grew up around here, has a lot of family around here. That's our goal, for sure.

Since Childers became Harvick's crew chief in 2014, the duo has accounted for eight victories as well as 14 top two finishes and nine Coor's Light Pole Awards.

Busch, Harvick's Stewart Haas Racing teammate, made his season debut after being suspended for the first three races due to an alledged assault of his ex girlfriend Patricia Driscoll. Busch, driver of the #41 Haas Automation Chevrolet, ran inside the top ten for majority of the race. Despite a late race pit stop which saw him fall back to 10th place with 17 laps to go, Busch was able to finish within the top five.

"The way that we raced today, it was with heart. And I thought there had been enough good will in the bank to try bring home a win," Busch said. "To run up there and almost lead a lap; I was just too loose on restarts and couldn’t quite capitalize on some of those positions that I needed to gain early in a run."

Both Dale Earnhardt, Jr, and Tony Stewart were involved in accidents which made them unable to finish the race. Tony Stewart, driver of the #14 Bass Pro Shops Chevrolet, spun around on lap 237 after contact with Paul Menard. Stewart returned to the track soon after only to slam the wall hard on lap 289, ending the three time Sprint Cup champion's contention for victory.

Earnhardt, Jr, driver of the #88 Nationwide Chevrolet, slammed into the wall on lap 180 after a right rear tire blew. The DNF was Earnhardt, Jr's first of the 2015 Sprint Cup season and snapped his three race streak of top five finishes.

"The car was really, really loose today and just wore the right rear tire out," Earnhardt, Jr, said. "They never tell you they are going to blow out (laughs), never.  You don’t ever have a warning."

With four races complete in the 2015 Sprint Cup season, Harvick sits atop the Chase for the Championship standings with his pair of victories. Daytona 500 champion, Joey Logano, has one win and is 22 points behind the lead. Jimmie Johnson, six time Sprint Cup Champion, also has a win and sits 58 points back of Harvick.