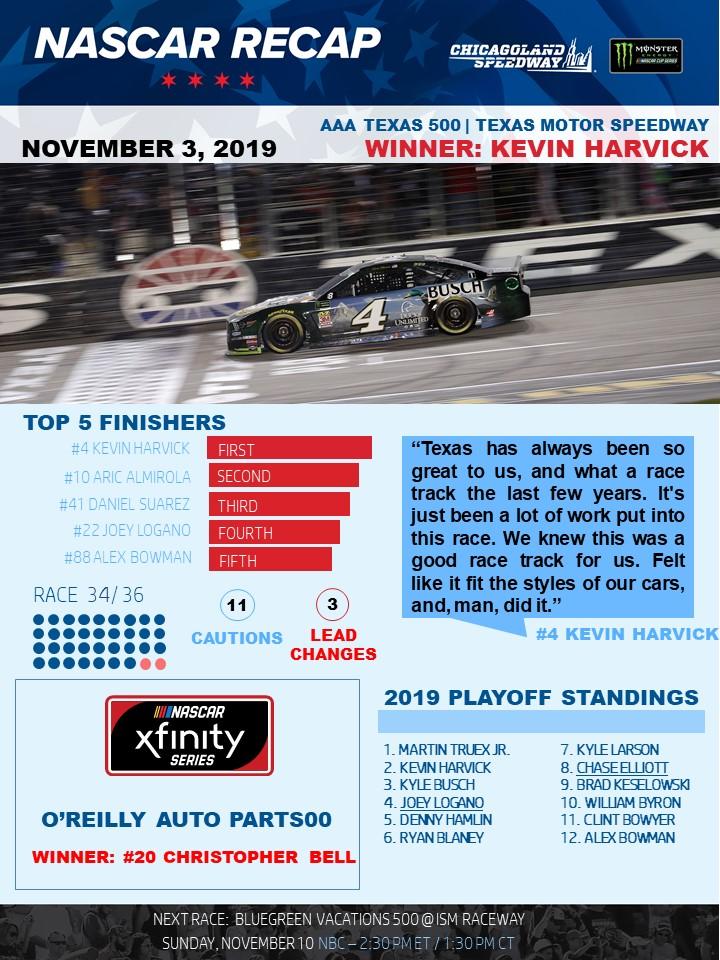 Drivers are told every year to watch out for Kevin Harvick when the Playoffs make it Phoenix, and it seems that will change to Texas Motor Speedway after another strong victory at the AAA Texas 500. Harvick started the day winning the pole with Erik Jones starting beside him and, on the start, Jones was able to stick to Harvick’s side long enough to just lead the first lap until Harvick was given a push by Hamlin to get to the lead. The first caution of the day then came out only ten laps in as Playoff driver Chase Elliott got loose into the corner and spun into the wall. The damage wouldn’t end Chase’s day, but it would put him many laps down and in desperate need of a win going into Phoenix.

With another great restart, Erik Jones was able to keep to Harvick’s side again, but Harvick managed to clear him again. A few drivers including Jones then hit a fallen turn 3 braking marker; bringing out the caution for the debris. With Jones pitting to make sure there was no damage, Aric Almirola inherited second. After a few laps, caution stuck again as Corey Lajoie had a similar wreck to Elliott; he was able to continue but with heavy damage as well. With the caution most of the leaders finally pitted and Jones and Clint Bowyer took over the top two. On the restart, Bowyer was able to clear for the lead, but the caution came out again soon after he took it. Brad Keselowski got loose coming off of turn four and Ricky Stenhouse Jr followed him in also getting loose; they both hit the wall and Stenhouse then plowed into the back of Keselowski, their days were done. As a few cars pitted, Ryan Blaney had a close call as he nearly drove his car off the jack. On the restart, Bowyer got a push from Martin Truex Jr to the lead as Harvick went three-wide behind them to move up to second. Harvick caught Bowyer but wasn’t able to get the lead as the caution struck again.

The caution was for Corey LaJoie again after a mechanical issue from the earlier wreck mad him lose the car and slam the wall again; his day was over. Another strong push got Bowyer to the lead again but the sixth came out to bring it all to a stop again.  The caution was for another Playoff driver as Denny Hamlin got loose out of four and came down into the grass and caught some air; the car was able to continue but the splitter was destroyed, and his day was effectively ruined. The caution set up a one-lap dash to the stage end; Bowyer was on the way to the win but Harvick was just able to pass him at the end to get the win.
Ryan Blaney was first off pit road with a two-tire stop but Jimmie Johnson and Alex Bowman had the lead positions for stage two start by staying out. After a long cleanup for oil all over the track after Michael McDowell had a mechanical issue, the green waved and Bowman was pushed to the lead, but he wouldn’t hold it long as Johnson was pushed by Almirola ahead of him. With Johnson in front, the longest green flag run of the day started and the drivers finally had green flag stops. As more cars hit pit-road, Kyle Busch takes over the top spot after he had pitted twice under caution to pack his car full of more fuel than anyone. Almirola got the lead back after Busch pitted and went on to win the stage in a very different and calmer stage two.
Suarez was first off pit-road with only fuel and adjustments but had to restart second as William Byron stayed out. On the restart, the two raced for the lead until Byron got loose on the outside and Suarez took the lead. Turns three and four struck again as Johnson, running in the top five at the time, gets loose and nearly saves it as he’s sideways but the car snapped back and caught the wall; his day was over. Suarez got to the lead on the restart, but the yellow appeared again as Garrett Smithley got loose as David Ragan got to his outside; Smithley caught the side of Ragan and it forced the two of them into the wall and ended their races. On the restart, Suarez was able to clear Almirola after some time, but Almirola was able to surge back to the lead with help from Kurt Busch. As green flag pitstops begin, the caution comes out for Bubba Wallace spinning with a flat tire; the caution hurt a few drivers who were a lap down thanks to their stops. Suarez and Almirola were able to pit just in time and keep themselves on the lead lap and inherit the front row on the restart while Ryan Newman gained ten spots on pit-road to start third.

Thanks to a push from Kyle Busch, Almirola was able to get the lead while Harvick came flying through the field to slot into second. Harvick started to pressure Almirola for the lead and after some laps of heavy racing between the two, Harvick was able to grab the lead. Green flag stops started and aside from Kyle Busch quickly stalling when leaving his pit, there were no issues and Harvick kept his lead after they cycled out. Harvick began to pull away as the laps began to fall until he caught the one driver no leader wants to try to lap at the end, Ryan Newman. Newman did everything he could to hold off Harvick and no go a lap down so much that Almirola began to quickly catch and Harvick’s lead fell under two seconds. With only a few laps to go, Harvick was finally able to clear Newman and pull away to claim his third consecutive win at Texas in the Playoffs and his fourth win of the season. The win locks him in the final four with Martin Truex Jr for a chance at the Monster Energy Cup Series championship.
Categories:
CP Motorsports