SPIN ON SUNDAY, WIN ON MONDAY FOR BLANEY AT TALLADEGA 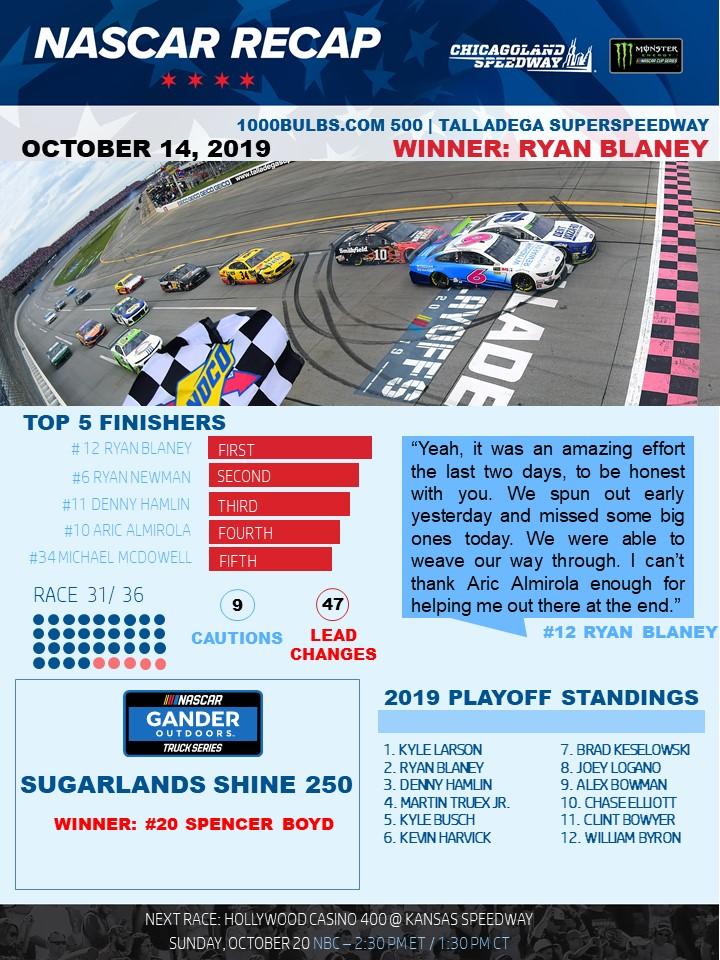 After a devasting, late race parts break at Dover, Ryan Blaney needed a grand showing at Talladega to have a shot at the next Playoff round. Even with nearly everything being thrown at him at some point, he would pull off the grand showing with a win at one of the toughest races of the year.

The week started off with many talks about possible team orders or manufacturer orders; it seemed to work out fairly well as Chase Elliott got the pole with the rest of Hendrick Motorsports filling out the top four while Denny Hamlin blew a motor and had to start from the back. The teamwork started when the green waved as the HMS drivers worked together to all line up at the bottom immediately. It wouldn’t last for long though as Clint Bowyer pushed Brad Keselowski all by their selves to the lead. Kyle Busch took lead a little later after pushing Austin Dillon to the lead thanks to a strong push by Hamlin, who had wasted no time making his way to the top five. The field then got four-wide as Austin Dillon and Kurt Busch left Kyle Busch out to dry; Kurt took the lead in the move. Blaney then came to the front and with approaching green-flag stops, the drivers decided to take it easy for a bit. The Fords all gathered together to pit at the same time and near-disaster struck as Blaney spun into the grass coming to the pits; the car was fine, but he was hit with a speeding penalty. Blaney was saved by the caution flag waving for Spencer Boyd stalling out of turn four and he wouldn’t have to serve his pass-through penalty. The restart came with Keselowski and Aric Almirola leading the pack; which wouldn’t last too long as Ryan Newman got to the lead with some help from Joey Logano. The dynamic duo of Keselowski and Bowyer get themselves back to the lead and Kurt Busch pulls up beside Keselowski and Elliott made it three-wide to get the lead. As the intense three-wide racing for the lead continued, Erik Jones fell through the field with a tire issue and had to pit. With one to go in the stage, William Byron and Logano go to the front beside each other; Logano’s run stalled out, allowing Byron to just get ahead and win the stage. The rain then began to fall and red-flag the race and eventually postpone the rest until Monday.

The next day, the grounds of Talladega roared once again as the engines were restarted. Blaney took the lead with only two tires while Newman pitted early deliberately to get a penalty and put him at the back of the pack and Keselowski had to get a push around the track to get it fired. The pack got three-wide at the start with Bowyer in the lead until Logano used the outside to get out front. Elliott screamed to the lead with the Chevys helping him surge ahead and make them the dominant manufacturer in the top-ten. The green-flag stops hit for the Chevy and Toyotas while the Fords strategy was to stay out a little longer. Martin Truex Jr and Denny Hamlin got speeding penalties as Jimmie Johnson led the Chevys to the lead as they pass the Fords that just pitted. After some back and forth racing for the lead, Logano was able to get ahead until Alex Bowman challenged him for it. The challenge from Bowman signaled the end for quite a few drivers as he tried to block Logano and got spun in the process. The wreck ended the race of Bowman, Kyle Larson, and Johnson while Truex, Ryan Preece, and Elliott had heavy damage but were able to keep going. The stage ended in caution with Bowyer, who was able to avoid any issue and drive by Logano, winning the stage.

Keselowski got to the front under the caution as some drivers decided to pit for stage 3. After some time, Bowyer got to the lead as the group started to go single line. The caution came out as Bubba Wallace had to swerve to avoid Landon Cassill, who was running out of fuel, and came up in front of Blake Jones which led to Jones and spinning and Wallace clobbering the wall. Most drivers stayed out and Bowyer and Keselowski brought the field to green. Kyle Busch got to the lead with some help from Erik Jones, but not for long as Logano got to the front and tried to start a single file line run. Truex then brought out the caution as his tire exploded and littered the track with debris. On strategy calls, Ricky Stenhouse Jr and Kyle Busch get the lead while Elliott has fought back to the top-five.

The low line started to build up again with Kyle Busch in the lead until the caution came out with thirty-six for Bowyer spinning with a flat and getting stuck on the track transition. Bowyer was finally able to move and get going but he would fall two laps in the process. After the pit stops, Byron got the lead, but Stenhouse was able to get ahead with help from Aric Almirola. The big one strikes again as Buescher gets pushed into Kurt Busch and causes Byron to be turned into Logano. Byron and Jones got heavy damage from the crash and were done for the day while Daniel Suarez, Matt Crafton (subbing for Paul Menard), and Logano also got heavy damage but were able to continue.

Restart with Ragan and Stenhouse leading the pack as a big scare for Buescher as he gets loose in the middle lane but saves it by squeezing into the bottom lane. Caution out for Suarez as his car spins thanks to the heavy damage from earlier. Restart with Stenhouse and Kurt Busch in the lead; Stenhouse powered to the lead but Kyle Busch made it three-wide to take it himself. And the big one would return one last time as Kyle Busch and Stenhouse made contact and Busch spun into Brendan Gaughan, flipping him, and catching others in the wreck. Keselowski, Kyle Busch, Matt DiBenedetto, Ragan were done because of the damage; ending good days for them. After cleanup, Ryan Blaney inherited the lead and was able to get one straight line going. Victory look assured until Newman, who had stayed near the back for the majority of the race, came up to join Hamlin and charge to fight for the lead. Off of turn four on the last lap, Newman and Blaney made contact that slowed both down and allowed Hamlin the chance to go outside and fight for the lead as well. Blaney was able to hold both of them off but just barely as he just beat Newman by seven-thousandths of a second to get the checkered flag at the 1000Bulbs.Com 500. The win was his first of the season and sealed his way into the Round of eight.