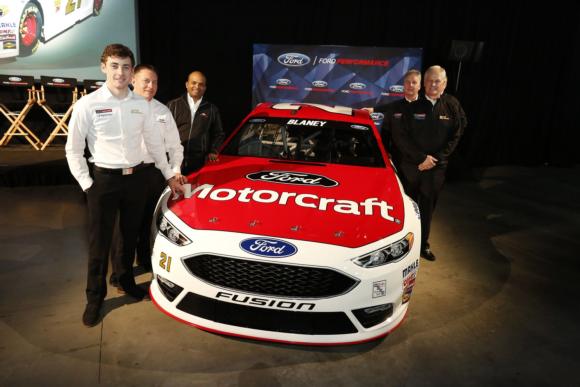 For the first time in nearly a decade, NASCAR’s oldest team will run the entire Sprint Cup Series schedule.

The Wood Brothers recently announced plans to race the No. 21 Ford over a 36-race schedule for the first time since 2008 with driver Ryan Blaney competing for Rookie of the Year honors.

With that news and a technical alliance with Team Penske, whose drivers Joey Logano and Brad Keselowski won seven races last season, team co-owner Len Wood believes a return trip to the winners’ circle won’t be far off.

Last week NASCAR announced its list of drivers who are eligible to compete in this year’s Sprint Unlimited, a special event that is a preliminary to the Daytona 500.

The Unlimited is scheduled Feb. 13, the 500 that annually opens the Cup Series season is set for Feb. 21.

The release of the aforementioned list—a whopping 25 drivers, or more than half of what would comprise a regular-season field—brought the first of these special shows in 1979 flashing into mind.

FIVE INDUCTED INTO NASCAR HALL OF FAME CLASS OF 2016 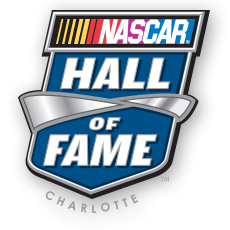 Five of NASCAR’s iconic figures – four drivers and one motorsports entrepreneur – were enshrined into the NASCAR Hall of Fame in Charlotte, North Carolina this afternoon during the Induction Ceremony held in the Crown Ball Room at the Charlotte Convention Center.

The group makes up the Hall’s seventh class in its history. 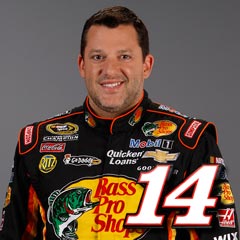 Kevin Harvick is coming off one of the most consistent seasons of his career. Danica Patrick showed signs of improvement. Kurt Busch won twice and nearly made his way into the Championship Race. But it was the fourth driver in the Stewart Haas Racing stable, Tony Stewart, that drew most of the attention during the first afternoon session of Chevy Thursday.

“It feels really good to know that this will be my last media tour, I can tell you that,” joked Stewart, who will be retiring as a full-time Cup driver at the end of this season. “I want to go out and have a fun year, but I also want to be racing with these three (Harvick, Patrick and Busch) toward the front every week. I want to contend for a championship.”

JOE GIBBS RACING LOOKING TO BACK UP BANNER YEAR 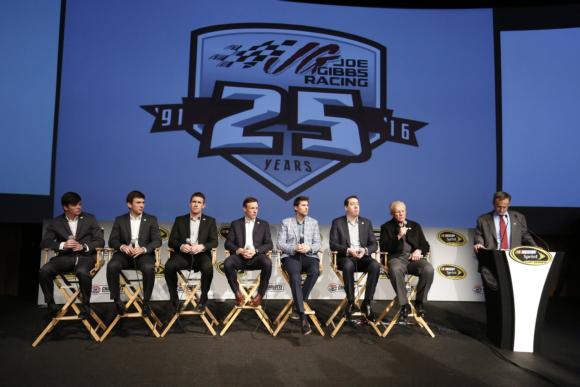 The first team to take the stage at the 34th annual Charlotte Motor Speedway Media Tour presented by Technocom on Tuesday was Joe Gibbs Racing. And with 14 wins among four drivers, including the Championship Race season finale that crowned Kyle Busch as the Sprint Cup Series champion, Joe Gibbs Racing is coming off arguably the best season in its history. Add Erik Jones’s 2015 Camping World Truck Series championship and Daniel Suarez’s 2015 XFINITY Series Rookie of the Year honor to that total, and JGR is certainly hoping to ride that momentum into this season.

“We had four (Sprint Cup) drivers with multiple wins last season; I don’t think another organization can say that,” said Matt Kenseth, who tied Busch with five wins in 2015. Carl Edwards and Denny Hamlin each won twice. “Last year was just an incredible season for Joe Gibbs Racing.” 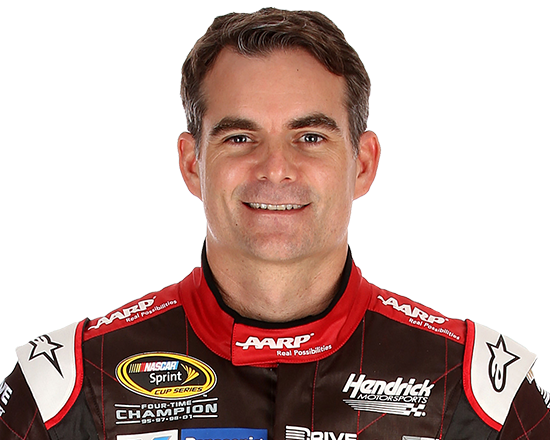 “I can’t wait to get to Daytona” is a statement that Jeff Gordon made numerous times during his 24 years as a NASCAR driver. Tuesday, however, provided a first for Gordon, who uttered those words in preparation of his first Daytona 500 as a NASCAR analyst. 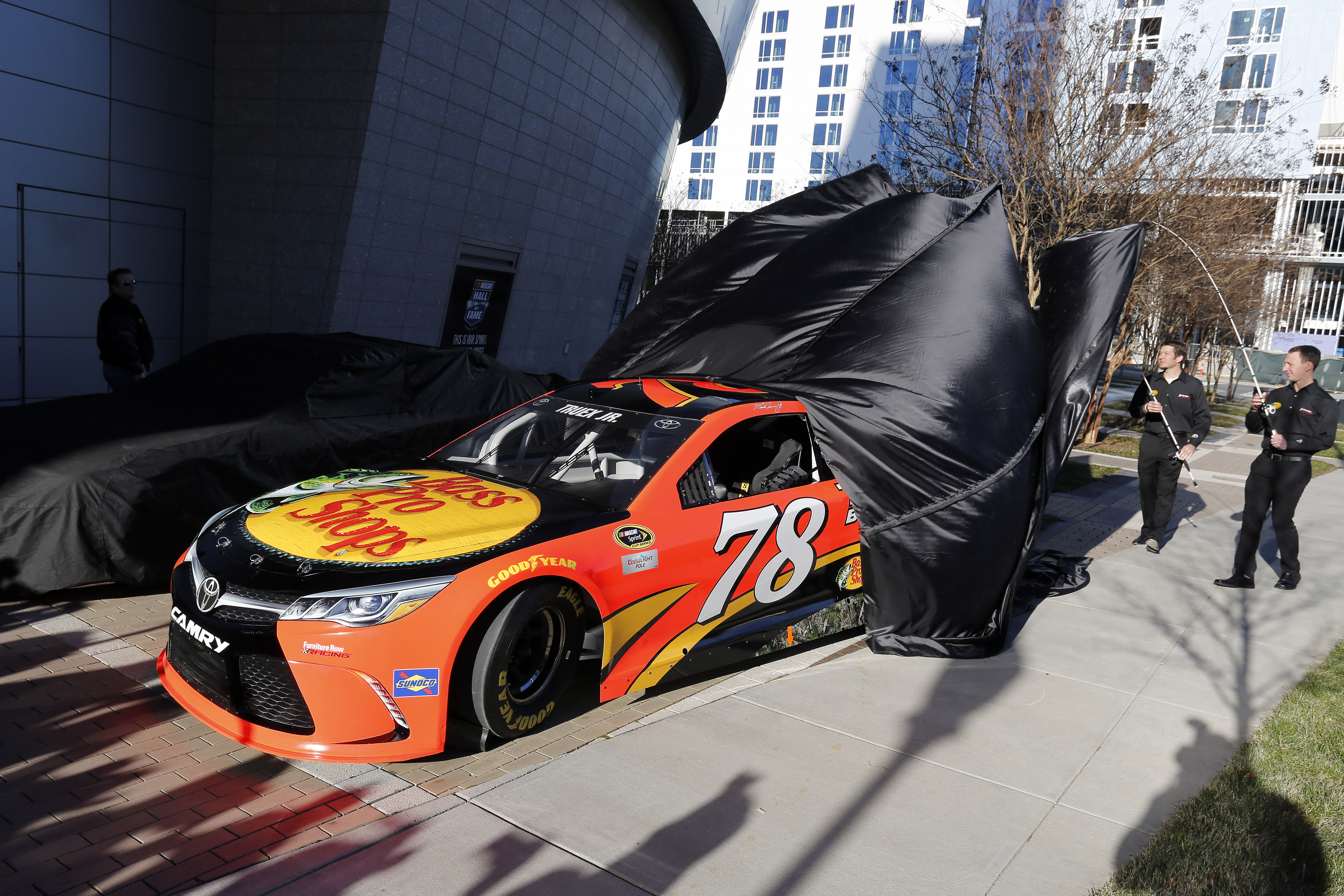 When the green flag drops for Martin Truex Jr. and the No. 78 Furniture Row Racing car in 2016, they will be adapting to new sponsors, including Toyota and Bass Pro Shops.

Garone explained his excitement for their sponsorship with Toyota by praising their efforts to improve the No. 78 Toyota.

Somehow, I imagine the stock car racing equivalent of Jim Mora, the football coach, yelling in response to a question after a less-than-satisfying game. Uh, race.

NASCAR. It's going to try them in four Xfinity races this season. Two heats and a main event, not just a main event. If it goes well, it is likely coming soon to the Sprint Cup Series. NASCAR sees it as an experiment. I see it as a trial balloon. Release the ropes, and see if it flies!