The National Hot Rod Association took a wrong turn a few weeks ago when it toughened penalties for drivers crossing the centerline during competition in Mello Yello Drag Racing Series events.

In addition to the past penalty of having the run disqualified, drivers now are docked five to 15 points for crossing the line or hitting one of the orange foam blocks.

Top Fuel dragsters and Funny Cars must remain within their lanes for 320 feet past the 1,000-foot finish line. Apparently, after that, they can cross over to take out an opponent without losing championship points. There also are no points penalties for crossing the line on burnouts.

NHRA states “crossing the centerline and/or striking timing blocks is a serious safety concern and causes delays in racing due to cleanup time required for such incidents.”

Another typically half-fast approach by NHRA to improve the sport.

Some have referred to the move as the “John Force Rule” because the biggest name in drag racing history had a few parts failures over the past year that led to explosions and a few abrupt turns, which never is good in drag racing. Some blamed those abrupt turns on the header angles.

Force has been embarrassed by an ill-handling race car, but the damage to his car might not have been a big concern as sponsorship from AAA of Southern California most likely provides collision insurance with a low deductible.

Maybe the larger issue rather than crossing the center-line is what causes these explosions?

Courtney Force and Robert Hight, and others like Bob Tasca III and Matt Hagan, have had carbon-fiber bodies morph into Fuel Altereds after blowing up through four Mello Yello events.

Over the years, racers haven't needed points penalties to serve as a deterrent, why now?

Imagine how former Funny Car driver Ron Colson would have felt after the 1978 NHRA U.S. Nationals. You know, the one where he crossed the centerline on a bye run into the semi-finals and was disqualified. Oh yeah, we are gonna take points away from you too.

By the way on a bye run, now it is no longer a disqualification. 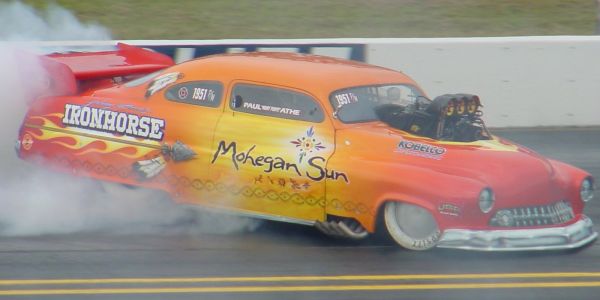 And, certainly who could forget the maiden NHRA Pro Modified run when the NHRA introduced the Pro Modifieds into their program (albeit as an exhibition category) and on the very first burnout driver Paul Athey crossed the line on a burnout and sideswiped Ronnie Hood in the other lane.

Athey returned to his lane, and the two backed up and ran as if this was part of the show.

Yet there is no penalty for crossing the centerline on the burnout. In internet talk, this would be an SMH moment. For those not hip to Internet jargon, SMH  means "shaking my head."

As bad as the John Force-Johnny Lindberg crash was, by the letter of the law written by the NHRA, Lindberg would have also suffered a points penalty. However, the NHRA race director always has the power to insert common sense.

These type of incidents are worthy of prime-time TV news. And NHRA’s ever-shrinking media department, which must be the smallest among major motorsports organizations, needs help from lane-change incidents and explosions to garner media attention. Heck, NHRA.com’s website features a “Wild Rides” section.

Behind closed doors, at NHRA headquarters you can bet fireballs and shards of carbon-fiber are not something it wants to be eliminated from the sport.

How many times was the body-tossing, dueling explosions by Robert Hight and Matt Hagan near the finish line at the Gatornationals replayed? Or any of Force’s three boomers or Brittany Force’s wall-banger at the opener? Those did more to garner mainstream media attention than any video of several world records set this year.

Force has been embarrassed by an ill-handling race car, but the damage to his car might not have been a big concern as sponsorship from AAA of Southern California most likely provides collision insurance with a low deductible.

One of John’s explosions this year made it on NBC Nightly News though no mention was made of the greatest name in drag racing or NHRA in the piece.

One of those longstanding regulations has been, if you cross the centerline or a timing block, you are disqualified. This has been a black and white rule for as long as I can remember. I see the need for the NHRA to extend their "safe" zone for the nitro cars out to 1320 feet.

If a racer is violating violates the centerline rule – old or new - regularly, then put them on probation or challenge their license but don't penalize a whole community for a rule which has been in place since as long as we can remember.

NHRA needs to decide which business it wants to be in.

Is it entertainment or racing?