Bob Glidden grabbed the ringing telephone and said, “You’re lucky you caught me. I just came in the house. I’ve been out for a week, digging up a septic system.”

Mind you, he was 70 years old at the time. But the Whiteland, Ind., native never lost that Midwest work ethic, that lunch-bucket mentality and even at 70-plus could put a longshoreman to shame with his productivity. Most remarkable is that Glidden’s self-imposed septic-tank assignment came not long after he underwent experimental surgery at Johns Hopkins Medical Center to receive stem-cell implants in his heart.

(Glidden, in typical fashion, sloughed off the serious procedure, saying, "I had open-heart surgery in 1994. Compared to that, this is no big deal.”)

Pro Stock pal Larry Morgan once remarked, “He works 100-plus hours a week. I’m telling you, he’s not human. I’ve never seen anybody work like that.” And Richie Stevens, Justin Humphreys, and the late Shaun Carlson saw first-hand how a man old enough to be their grandpa could outwork them.

Golf didn’t suit Glidden all that well in retirement from his 10-time Pro Stock championship career that included 85 victories (fourth on the NHRA’s all-time list). He said, “I suck. I’m horrible, but I’m fast.” Chris Kaufmann, a longtime racing industry leader and himself a former golf pro, said Glidden wore him out on the links with nearly nonstop rounds on one impromptu trip.

Billy Glidden enjoyed his father’s high-octane golf game and his zest to keep busy: “He likes to take on big projects. When he goes after something, he goes full tilt.”

But Bob Glidden The Machine shut down late Sunday at age 73.

“We all know what Bob Glidden has accomplished in a lifetime: feats that will never be broken, accomplishments that will never be broken. We know what he’s accomplished and what he’s done. He was the man. But there’s the other side of Bob Glidden, the personal side of Glidden, him as a person,” 16-time Funny Car champion John Force said. He said he admired “the love that [Glidden] had for his family, his boys [including Rusty Glidden], and [wife and partner-in-grime] Etta . . . how he always treated everyone with respect, even if it was just in passing. That was the side of the man that I loved the most. He will be missed. I miss him already. But he’ll be with us every day.”

For 28 years, from 1988 until Tony Schumacher won at Indianapolis for the 10th time in 2016, Glidden owned the distinction of winning more U.S. Nationals trophies than anyone. But he had absolutely no problem sharing his hometown spotlight with the Top Fuel ace. 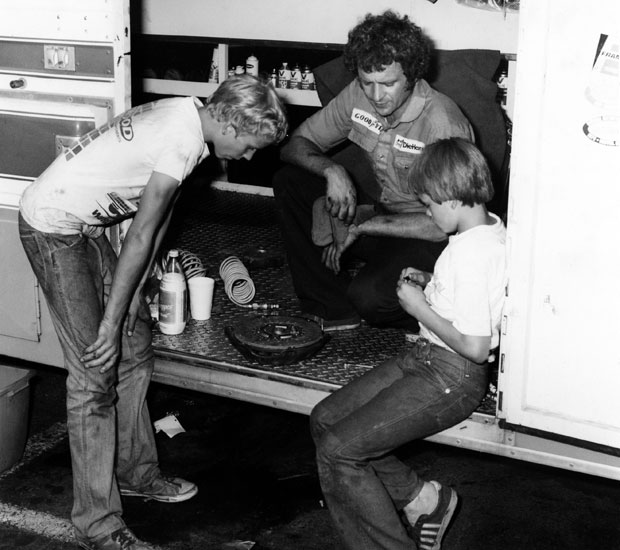 "No – heck no, shoot no," Glidden said. “We had a lot of good luck and a lot of success at Indy. And that was in the past. This is now," he said as Schumacher was on the verge of eclipsing his record. “I remember, but that is in the past.”

Moreover, he said he believed Schumacher will go well beyond 10 victories at the NHRA’s marquee event. "They've been in a down time,” he said a couple of years ago. “They're going to come back and kick butt. He'll have several more Indy wins."

Besides, Glidden said of his own achievement, "I don’t think it was any magic. I just think we were close to home and we had a better chance to get dialed in on our race car. We were so close to the track – that had a lot to do with our success at that track.”

Still, Morgan spoke for many when he said of Glidden, “There’ll never be anybody as good as he was—ever. He was way ahead of his time in every way. He was too good to quit when he did.”

harleyWhat distinguished Glidden’s brand of success was a factor that newcomers to the sport might not comprehend. A glance around the property at any modern national event reveals mammoth haulers with ultra-professional paint schemes, Taj Mahal hospitality areas, and a businesslike approach to merchandise sales, not to mention plenty of female participants. In Glidden’s heyday, the set-up was more Spartan. Women weren’t permitted in the pits, and often even the prominent racers simply found a patch of ground (preferably under a shady tree during a hot weekend) on which to set up shop. Bob and Etta Glidden, and later their sons, were the team, doing it all.

She and Bob dated for one month before they married – the first of three dates at a movie, then twice at the races, as she worked on his Ford.

“We started out dirt poor. We had to depend on ourselves to get things done,” Etta Glidden said. “It was a mutual understanding. I knew what he wanted to do. If you’re going to marry into that, you have to realize what it’s about.”

If she had had the chance, Etta Glidden would have pursued a career in the health-care industry. She did win nine trophies in three years of local racing, but she decided to turn wrenches on Bob’s car and focus on raising their boys. Her driving days ceased when Bob had an accident (with minor injuries), and she said, “Someone had to stay alive to raise the kids.” So she rolled up her sleeves, ignored the injustice of females being excluded, and used what she called “grassroots knowledge” to help Bob carve one of the most exceptional careers in motorsports history.

They worked side by side seven days a week for 30 years. “My goal was to make this race team successful and do it by going by the rules,” Etta Glidden said of those markedly different times. “I’m not a chief. I’m a warrior.”

A warrior was exactly how many of Bob Glidden’s colleagues would have described him.

Someone hung on him the nickname “Mad Dog,” but those who got to know him were convinced any bark of his surely was worse than his bite. He undeniably was a pit bull behind the wheel of his race car, but he was as loyal as a Labrador: loyal to his friends, to his family, and to his Pro Stock class.

Glidden told NBC’s Jerry Bonkowski that neither Top Fuel nor Funny Car could lure him “because Pro Stock is pure and true. They look a lot like the cars you see and drive on the street or buy at the dealer. That’s what drag racing was built upon.”

Schumacher said he never figured he had it easier than Glidden. "No, not even for a second," he said. "In my opinion, it’s harder to get one [victory] now. Back then, they were substantially ahead of [competitors]. They didn't win by thousandths of a second. They won by a lot of seconds. It's so ice-cold, Top-Gun-pilot stuff now. Then they worked on the cars. They innovated. The cars weren't all the same. We have replicas now. Back then, you change an aerodynamic feature and put the motor in a different place and it was substantially faster."

Billy Glidden said he was proud of the way his father (who lived with Etta on the same parcel of land as Billy and wife Shannon) maintained his independence and stayed active. Son and father had a mutual understanding, too, when it came to Billy’s Pro Modified team – which, in Glidden Family form, is a two-person show with Billy and Shannon. It was no disrespect to his dad. It was just the best way to preserve their cordial relationship.

“Every now and then, Dad gets a thought that he wants to help out if he can. And the problem that I have is when you’ve got a normal routine and you just throw some new variance in the middle of it, it screws up your whole routine. He offers every now and then, and I tell him thank you. If I got to where I had to have help, he would do it. But I’d like for him to stay retired and do things the way he wants to do them. And you know dang well either I’m going to be doing something he thinks should be done differently or he’s going to be doing something that I didn’t want done that way. And I don’t want to have that as a probability to create any friction.”

However, Billy Glidden said, “I like the fact he’s my dad.”

We all liked the fact that he was a superb drag racer, a gentleman, and our friend.

Whenever we talked by phone and were saying our good-byes, Glidden would end the conversation with “Well, by gosh, thanks for calling.”

All we can say is “Thanks for giving us your time, Bob.”