SUSAN WADE: CAPPS HAS HIS LIST; WE HAVE OURS

After Ron Capps and his Rahn Tobler-tuned NAPA Dodge Charger Funny Car defeated Hight and his Auto Club Ford Mustang in the final round of the Summit Southern Nationals, Capps shared some frustrations -- with qualification.

"We love those guys," Capps said of Hight and his JFR team. "Tobler and Prock went to dinner here not too long ago. They're good friends, and Robert and I are good friends. We had dinner last night and watched the UFC fight. I told them at the other end [Sunday], 'You guys bring everything I got out when I have to race you.' " 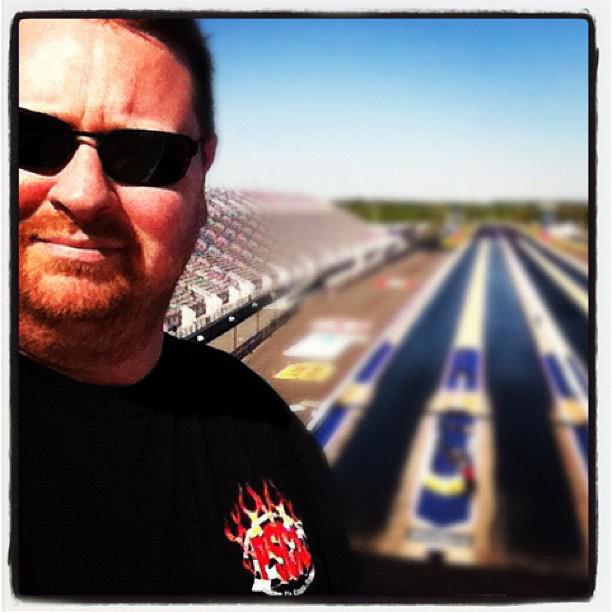 It is only 9 a.m. in New York City, but it’s already been a busy morning in what promises to be another hectic-yet-profitable day for Eddy Hartenstein and Tom Compton, the chairman and the president of NHRA Pro Racing, which has sped past NASCAR as America’s No. 1 racing series and is riding the wave as the country’s hottest sports marketing property.

The two execs hurry to their dragster-long limo after a very positive breakfast interview with editors of the Wall Street Journal. The Journal is readying a Page One story on how drag racing, the most American of all American motorsports, has zoomed to national prominence after Hartenstein’s HD Partners bought NHRA in a $121 million deal announced five years ago this month. Warren Buffett was quoted in Forbes last week as praising NHRA’s forward-thinking and innovative business plan. Hartenstein and Compton are flooded with invitations to be featured speakers at business conferences -- CEOs everywhere are asking, “How did you do it?”

(Rumor has it Compton -- hotter than an exhaust header among CEO headhunters -- just iced an offer to become commissioner of the National Hockey League. He couldn’t afford the pay cut.)

Corporate America has fallen in love with the straight-line sport. Ford, GM, Chrysler, BMW, Toyota, Honda, Mazda, Hyundai and Nissan have factory-supported teams, making NHRA the biggest and most important racing battleground on earth for the automakers. Porsche -- yes, Porsche -- is studying it. Apple, Starbucks, Panasonic, AT&T, FedEx, General Electric, Lowe’s, Subway, Exxon Mobil and Walmart are among the series’ newest sponsors. The legendary beer wars have returned, with Budweiser and Miller again backing prominent teams. And now a record number of fans are taking sides in the burger battles, with McDonald’s vs. Wendy’s in both the Top Fuel and Funny Car classes. Jegs.com says the drag racing boom has quadrupled its mail order business.

UP FRONT: INEXCUSABLE…AND WE’RE NOT EVEN SURPRISED

This will be the shortest Up Front editorial I’ll ever write for CompetitionPlus.com. And I promise to keep it that way.

There is absolutely no excuse for the pit-parking situation at Royal Purple Raceway in Houston this coming weekend, none whatsoever. The blame for this situation falls at least partially on the heads of the track ownership, but more solidly on the seemingly empty heads in Glendora, who clearly failed to think this through before relegating professional competitors to a second-rate pit area on the grass.

In the last five years the amount of pit space relegated to the heavily sponsored fuel teams has been on the increase, and dramatically so. Despite the fact that team owners pay for the privilege of housing their increasingly massive hospitality areas next to their pits, things have gone beyond the point of being questionable and have reached the point of ludicrousness.

One of the primary selling points that NHRA Drag Racing has with potential sponsors is the direct access to the drivers that the fans enjoy. Ours is the only motorsports endeavor in which this is the case and believe me, it’s a very important point. However, when hospitality space increases to the point where those very same fans are forced to walk an additional quarter to half mile to see their favorite driver (and that distance is no exaggeration), it’s time to re-evaluate the whole situation.

BOBBY BENNETT: IT'S JUST CHANGE, NOT THE END OF THE WORLD

There are some who never accept change and those who see change as growth.

Those unwilling to accept change will never embrace 1,000-foot drag racing, nor will the Countdown to the championship be a source of pride. And, don’t mention drag racing while running four abreast, the once a year style of racing is a definite jolt to those willing to fight for the past and never defend the future.

Throughout their history, professional baseball has  changed; professional football has changed. And, their fans aren’t staging boycotts just because big league baseball has adopted interleague play; or, pro football changed the format of the overtime session.

Granted the National Football League never shortened the football field but if we are going to compare apples to oranges, in the interest of fair reporting, they never had a football player run off the end of the field and lose their life; not that I am aware of. They did, when players were coming up in later life mentally incapacitated because of head injuries, implement new rules controlling tackling. In fact, they are discussing doing away with the age old tradition of kick-offs in the name of safety.

In drag racing, for many it is safety be damned in the name of tradition.

Yellow means Jegs at NHRA Full Throttle events, so finding Jeg Coughlin Jr. at the Arizona Nationals was easy.  It’s good news for the drag racing series that the four-time Pro Stock champion is back after a one-year hiatus, in the Jegs.com Mopar Dodge Avenger.

Coughlin -- and his family -- are important figures in the straight-line sport for several reasons. Jeg is one of -- I’d say THE -- best driver in the class, without the advantage of the outright fastest car. His opinions are well considered and well stated. And I’ve always appreciated that the powerhouse that is the Jegs.com mail order business has put money back into drag racing -- including getting contingency award cash into the hands of sportsman racers.

Coughlin and I sat down in his motorhome at Firebird International Raceway for 10 questions. His answers, in some cases, have been edited slightly for length and clarity.

Not that it was mentioned or celebrated at last month’s Arizona Nationals -- it should have been part of the pre-race ceremonies -- but the Grand Canyon land is commemorating 100 years of statehood. With the race’s future unclear after next February, however, NHRA and promoter Charlie Allen need to spend at least 100 hours thinking about what this event is supposed to be.

In case you need to be brought up-to-date: As I originally reported in the Arizona Republic, Allen’s lease with the Gila River Indian Community expires in the spring of 2013. Allen says there’s a “1,000 percent” chance next year’s Nationals will be staged at Firebird International Raceway. But all bets are off after that, because Allen hasn’t been making any negotiating progress with the Community, which owns the wildly successful Wild Horse Pass Hotel and Casino across the road.

The Community also owns the land upon which Firebird sits, near Chandler, not far from Phoenix Sky Harbor Airport. Allen’s existing deal includes a seven-year lease option at “mutually agreeable terms” but his attorneys have been making less headway than Larry Dixon trying to land a suitable new Top Fuel ride. 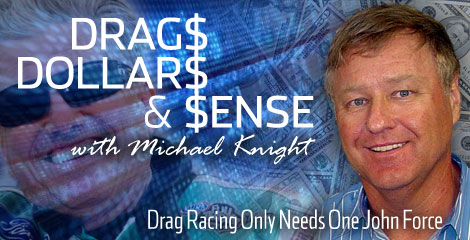 Don’t go smokin’ your tires in a rush to run me over, Force fans, because I mean that in a good way.

From a Business of Racing perspective, Big John is a huge positive for the straight-line sport. He’s special. He’s unique. He seems bigger than life. He’s one of a kind.

And that’s my point.

The 15-time Funny Car champion already occupies the available space in the public/media/corporate marketplace reserved for successful, oversized -- sometimes outrageous -- personalities. That works for Castrol, Auto Club, Brand Source and now Traxxas and so they’ve pledged themselves (and their sponsorship money) to Team Force. They don’t need a Force clone to help them sell their products and services.

Too soon to tell, but this much I can say for sure, unlike most of those campaign promises you’re hearing these days:

History teaches us that presidential election years are years of uncertainty and inaction in America. There will be less happening in Congress than on a rain-soaked drag strip, lest one political party gives the other an issue advantage. Al-Anabi Racing made more consequential decisions in December than our elected representatives will in 12 months.

The national motto right now seems to be: Go Slow.

It may well be that way for many of us -- you and I -- as individual consumers. Ditto with Big Business. Despite what could be interpreted as some up-arrow economic data as 2011 ended, we’ll likely be extremely cautious in making major purchasing and financial decisions. We’re not sure who will be the USA’s CEO and how that will affect us as the CEO of our own households.