UP FRONT: FACING UP TO A VERY TOUGH FUTURE

‘Tis the Christmas Season and on your TV screen is a commercial for Dunkin’ Donuts. A family of four, hideously attired in snowflake-embroidered sweaters, appears at Grandma’s door. As the door opens three smiling faces greet Grandma. The fourth, a teenage girl, not only has a totally disdainful expression on her face, she’s not even looking as she furiously texts away.

Advertising reflects the marketplace, and this is today’s marketplace, where young people are so totally disconnected from their parents that in many instances they merely share living space, not a family life. My daughter told me of a family party she attended that was a dual celebration for the patriarch. It was both his wedding anniversary and birthday. As he received congratulations from the group his three sons sat with their heads buried in electronic devices, two playing games and one texting. When she quietly suggested they ought to give their dad at least some time on this important day, they gave her dirty looks and went right back to punching keys and pushing buttons.

The traditional American family may be a thing of the past, and we have no intention of trying to solve this issue or of explaining how we got here. All that matters is that we’re here now, and unless we can figure out how to reach today’s young people, drag racing may die an ignominious death – and this is no exaggeration.

NHRA passed-out its sporting awards at the glitzy black-tie Full Throttle series ceremony in Hollywood last month. Congratulations to the winners and champions in every class. Hope you enjoyed your time to shine on the stage.

Here, however, we put the spotlight on the Business and Politics of Drag Racing, not ETs and MPH.

A DRAG STRIP'S WORST ENEMY: THE MASTERS OF THE OBVIOUS

I guess we’ll find out next season if Courtney Force, Alexis DeJoria and Leah Pruett are good Funny Car drivers.

But there’s a more important question, at least from a Business of Drag Racing standpoint:

Can they move the needle?

DID THE ALMIGHTY DOLLAR KILL THE MAJORS?

The racers call them “The Majors”, but are they really major?

The drag racing community refers to Indy as the “Big Go” but is it really the “Big Gone?”

When you have twenty-four races, sometimes three in a row, what really makes these events special?

As I see it, nothing.

For all of its zeal to return to the good old days in recognition of the 60th anniversary, the NHRA missed, in my opinion, a chance to exploit the legends who helped build the sport.

The NHRA appears to have forgotten about the one part which made these legends into legends – the events.

DRAGS, DOLLARS & SENSE: NOT ALL INK IS GOOD INK

John Force needs to speak up. Don Schumacher doesn’t have two nickels to rub together. Nitro is as safe to drink as water.

Kenny Bernstein couldn’t sell a sponsorship if his life depended on it. Jeg Coughlin Jr. was just an average Pro Stock driver. Every ticket for every Countdown race has been sold.

Katie Couric is replacing Paul Page in the TV booth. Bob Tasca III is buying NHRA and moving the offices to Rhode Island. TMZ has video of Melanie Troxel eating at McDonald’s.

To the above list of bogus-as-a-red greenback sentences, add this:

Any publicity is good publicity.

DRAGS, DOLLARS & SENSE: STUFF TO PONDER HEADED INTO THE COUNTDOWN

Yes, it’s Countdown time. To be the most knowledgeable fan you can be, however, the on-track action isn’t all you should be thinking about these days. Here are some Business of Drag Racing issues to ponder during the inevitable oil downs and rain delays:

The economy. National and world financial markets are more volatile than nitro fuel. Will there be enough cash around for all events to have full fields? What announcements will we see -- or not see -- on new or renewed sponsorships? Who will -- or won’t -- be able to come back in 2012? How much has the collective net worth of team owners declined in the last month? (That last question might be the most important.)

Consumer confidence. It fell in August to the lowest level since May 1980, according to Thomson Reuters/University of Michigan research data. If people don’t feel good about their financial future, they are less likely to spend on non-essential items. Like drag racing tickets. Will NHRA’s playoffs play in front of an embarrassing number of empty grandstand seats? Discount (or free) deals for military members and children make for good PR and smart business, but honestly, these days, they aren’t the kind of innovative sales/marketing promotions the sport requires.

WHEN COMMON SENSE FAILED TO CROSS THE ATLANTIC

A first-grader is suspended and faces expulsion from an Ohio elementary school for taking a plastic knife from the school cafeteria. The school board said the plastic knife violated the school’s zero-tolerance policy for weapons. 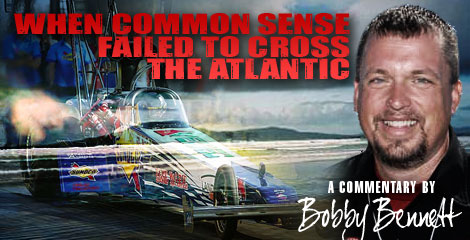 In Dallas, a 97-year old woman was arrested, handcuffed, hands behind her back, and taken to jail. And her transgression was . . .? She failed to pay a traffic ticket.

Tommy Johnson Jr., an American drag racer with an impeccable reputation, not mention natural talent, travels to Europe to compete in the FIA’s Top Fuel Series. He wins every race not cancelled by ran rain, and with two races left in the season and needing only one round to clinch, he’s stripped of his license.

The message handed down Wednesday is that Johnson’s appeal of a 24-month suspension was reduced to 12 months but he was considered guilty of violating the series’ anti-doping rules, even though they believed there was never an intent for the doctor-prescribed drug in Johnson’s system to be used as a means of performance enhancement.

Johnson’s plastic-knife violation or unpaid parking ticket, his zero-tolerance infraction, was for having a Dexedrinbe in his system to treat a severe case of narcolepsy, a sleeping disorder which can put its victims to sleep without warning.

This is hardly the condition you want untreated when someone is behind the wheel of an 18-wheeler, much less an 8,000-horsepower, nitro-burning dragster. 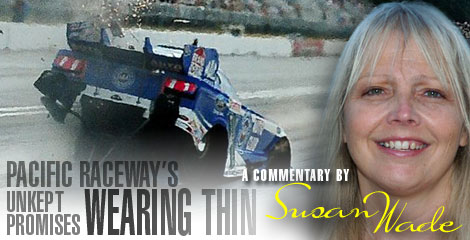 Funny Car veteran Ron Capps is an old drag-racing soul in a young body. He has joked many times that he was "born too late," for he has an incurable fondness for the glory days of the sport, the days before corporate involvement (as beneficial as it is) dictated the culture.

Seattle is one of his favorite stops on the Full Throttle Drag Racing Series, for it has its own legend, its own free-wheelin' vibe.

Just as clearly as he can see the fir trees that ring Pacific Raceways, he almost can see promoter Bill Doner, like Monte Hall on "Let's Make A Deal," bargaining with fans who drove up to the front gate and had no money for admission: "What do you have in your car that we can trade? Anything good in the trunk?" Capps can hear the rock bands playing. He can picture "the free living or whatever you want to call it." Etched in his imagination, thanks to tales from Don Prudhomme and Ace McCulloch, were the crazy burnouts with frenzied fans beating on the cars as they backed up.

"It's when things must have been a lot of fun," Capps, a California native, said. "It's sort of like going to Indy or for me like going to Pomona, where you look around on the ground and say, 'Wow, Jungle Jim probably was pitted here. I love it. I love this part about it."

DRAGS, DOLLARS & SENSE: IS IT TIME FOR A FAN EXPERIENCE UPGRADE? 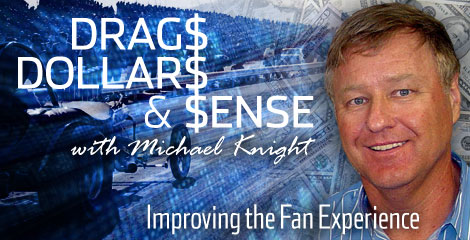 It’s a statement as simple as a Wheelie bar and as important as a Wally trophy:

Other than safety, The Fan Experience should be the No. 1 priority for NHRA and its national event promoters.

Are the sanctioning organization and its track operators doing ALL that can reasonably be done to make that happen?

Honestly, I don’t think so.