CRUNCHING THE NUMBERS by Roger Richards

Rodney reached a milestone
on December the 10th of 2006. Rodney is the name that my frequent
travel companion Brian Wood and I have given to the Astro van in which I have
criss-crossed the country for the last 5 years. We gave it that name because
any time someone asked what I drive and I tell them an Astro they usually roll
their eyes and give me that “I’m Sorry” look. Since the Astro gets no respect,
it has earned that name.

However, not many vehicles
can boast of the accomplishment that occurred about 7 pm on the 10th
of December. Rodney rolled over 300,000 miles while rolling down the right lane
of Bristol Dragway. Each year, Bristol
allows cars onto the grounds to view thousands of Christmas (not holiday)
lights decorating the complex.

GETTING A FRESH START by Ken Owen

If you’re like most people I know – and especially racers as a whole – you
probably find comfort in being able to turn the calendar from December to
January every year. It’s a new year, a fresh start, and an opportunity to put
the past behind and begin looking forward to a new beginning.

Due no
doubt to my background and training as a minister, every year at this time my
mind remembers a little portion of scripture located in 2 Corinthians 5:14-17,
in which this statement is made …“old things are passed away, and all things are becoming
new.”

I can remember always being intrigued by that message.
What a comforting thought to know that we are given opportunities to start anew.
And even though the author was obviously speaking about new beginnings in a
spiritual context, it’s nice to also have fresh opportunities in other areas of
life.

WHAT IF? with DALE WILSON

Okay, so I’m king of drag racing, and I can make up whatever
rules I want. Here are some more “what-ifs” that I would recommend to the
association rules makers.

What if…NHRA introduced Top Dragster to the divisional
eliminators? Well, they’ve actually done it in Division 2 recently. Top
Dragster, the fast dragster eliminator that has been contested in IHRA country
for years, now comes to the NHRA, to go along with Division 2’s Top Sportsman
Eliminator. Division director Bill Holt made the announcement in the first part
of November, and Top Dragster will be a go for all 2007 divisional races.

Regardless
of religious background or affiliation (or lack thereof), people
usually view the Christmas holidays as a season of peace. But I wonder
at times if peace is as common a condition as it once was in our
society. Sociologists tell us that peacefulness is something that all
mankind seeks and is willing to go to great lengths to find.
Unfortunately, it appears to me that more and more people every year
seem to be in a constant search for what I call the missing peace.

I imagine that one of the most distressing experiences a racer can
endure is to finally complete an engine rebuild—only to discover that a
few extra pieces still remain. (And, yes, I speak from personal
experience, but please don’t ask.)

The greatest weekend perhaps ever in the illustrious history of drag racing was marred by a driver disobeying a direct order.

Tony "The Sarge" Schumacher’s record run in the final round against
Doug Kalitta gave him his third straight Top Fuel championship during
the Pomona finals.

John Force beat Ron Capps in the second round to clinch his 14th world
title and proved that old men can still react better than a young one.
The quicker reaction propelled him to his 122nd event title and a win
over Jack Beckman’s record-setting flash down the quarter-mile.

UP FRONT with Jon Asher

Getting the National Hot Rod Association to admit there have been
mistakes in their operations, and that maybe changes should be made in
the way they do things is somewhat akin to getting Congress to admit
there have been ethical lapses by some of its members.

Historically, the NHRA has seldom, if ever, been receptive to ideas
that come from outsiders, and all too often, from those inside the
confines of 2035 Financial Way as well. Part of that is a result of the
corporate life and isn’t necessarily endemic to the organization. It
happens in companies of all sizes, particularly those in which, for
whatever reason, executives constantly fear for their personal future
with the firm, and often make questionable moves more designed to
protect those futures than to advance the company’s goals. It’s in
those environments where a worker bee’s suggestion will be advanced by
the boss and claimed as his own if the uber boss likes it, or will be
just as quickly abandoned by that middle manager when the uber leader
turns up his nose in distaste. The middle manager is the one likely to
say, “Well, it wasn’t my idea. That one came from So-and-So, and I
promised to present it to you. I didn’t like it either, but I did
promise.” Sure you did!

ARE YOU POSITIVE? by Ken Owen

Most people accept the idea that stress and depression eat
away at the body’s natural ability to fight off disease, but many medical
scientists have remained skeptical over the years that the mind can actually
exert a direct influence over the immune system.

In recent years, however, evidence has suggested that
psychology can indeed affect biology.

CATCHING UP with Jack Beckman 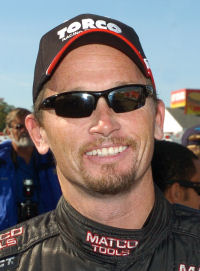 Wow, do we have some catching up to do! I’m happy to say that since my
last column I’ve really got some exciting news to share. Let me quickly
get you up to date on my sportsman racing activities so we can get into
the Nitro news.

I had a good time racing with the CIFCA association in Phoenix. I had
not been to Speedworld’s track for almost nine years, and the intense
heat and lack of traction made for some exciting runs. We made it to
the semifinals and moved back into the top-four. The following weekend
I was back in the “Blackbird” racing in Fontana at a SCEDA event. I
gave back the stripe by .001 in the final Saturday, but I was fortunate
enough to make it back into the money round Sunday. This time I took a
“comfortable” margin and was able to turn on the win light. Then,
something really special happened.

As you know, Rodger Comstock of MTS has been working tirelessly since
the end of last year to place me into a competitive nitro ride. Many of
our conversations involved Don Schumacher Racing (DSR)- working on both
a Top Fuel and later a Funny Car ride. Don offered us the ability to
upgrade my license during this season so that if a F/C ride did open, I
would be ready. Phase one began with me flying out to Indy to make two
short “squirts” in Whit Bazemore’s car during the PRO test session one
week prior to the U.S. Nationals. I was able to make 330 and 660-foot
runs and all went well.

However, there is really much more to the story. If you have followed
the racing action, you may have seen Whit’s nasty fire during round-two
of the Memphis race, which was delayed until Monday. Whit actually
jumped from the burning car while it was still rolling, and there
wasn’t much that was salvageable. The crew drove all night to get back
to the shop in Indy to assemble a new car. I watched Whit make two
half-track runs on Tuesday!

The last month or so has been a very good stretch for Team DBP and the
PiranaZ GTO. We still haven’t broken through for our first Pro Stock
win, but I think it’s safe to say we’re getting very close. People have
asked what we’re doing differently, and most seem surprised when I
answer “nothing”. We’re still doing our own engines, and I’m still
working with the same crew.

If anything has changed, I’d say it’s that we’re finally getting to
race in air that lets us show the power we’ve had all along. And thanks
to the Reading and Richmond rain-outs, we’ve gotten to spend a little
more time at the shop than we otherwise would have. And that’s allowed
us to keep our best parts & pieces fresh- even if we’re logging
serious overtime!

FAITH IN THE FAST LANE

As is true with most people (drag racers of the male gender being a
possible exception), I love flowers. Every shape, size and color. From
long stem to short stem, I admire them all. But I have always pondered
one ironic phenomenon concerning flowers.

When you cut a flower and place it in a vase (for you male racers,
that’s a cylindrical object filled with water—similar to a puke tank
with the top removed), you are actually removing that flower from its
very source of life. Yet it continues to have the look of life and
vitality, even though the death process has already begun. With proper
care and nourishment, a flower may continue to look healthy for days or
even weeks, but eventually the death process overcomes the fragrance
and loveliness of even the heartiest and most beautiful blossom.