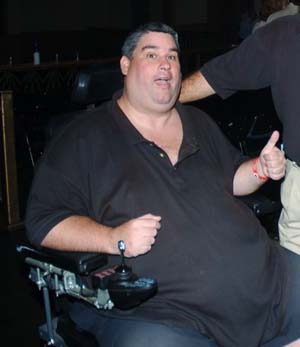 On Friday, December 29, 2006, drag racing lost the ultimate fan and the staff of Torco’s CompetitionPlus.com lost one of their dearest friends. We learned this morning that Mike Aiello passed away at the UCLA Medical Center in Santa Monica, Ca.

Mike was involved in a work-related accident back in 1999, which left him paralyzed from the waist down. He fought a multitude of complications associated with his condition in the intervening years, but recently they increased in complexity.

The last years of his life were consumed battling with insurance companies and other entities in an attempt to gain the medical attention, special care, and equipment he needed to live some semblance of a normal life.

Throughout it all, Mike never wavered in his love for the sport or his support of the underdog. He always stepped forward to help those who couldn’t fight for themselves and offer them the tools they needed to get the job done.

We should know. Mike helped a fledgling publication called CompetitionPlus.com in its formative years to gain its niche in the racing media world. He was never a front-lines individual. He was one who chose to be a soldier behind the scenes.

Mike would often chase down stories in the pits and hand them off to our reporters to write. He loved the sport and admitted that it was all that kept him going at times. It wasn’t so much the sport as it was the people that kept that fire burning in his heart.

Now Mike has gone on to a better place, and while our hearts are broken today, we can take comfort in knowing that our friend of decades will remain in our hearts for eternity. Most of all, he will never hurt again.

Rest in peace, Mike. We will always love you and cherish the memories we had as friends.