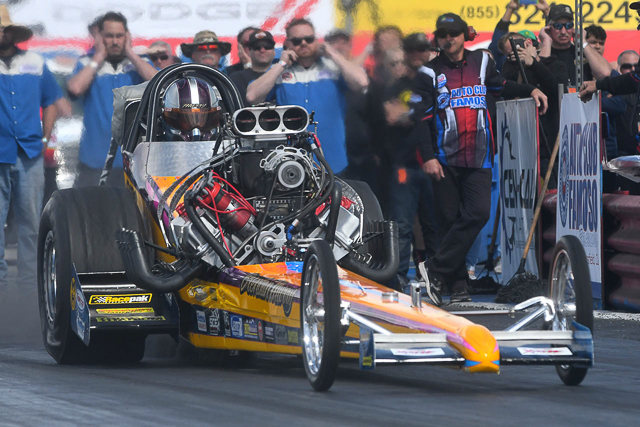 Fourteen AA/Fuel Dragsters will compete for the California Hot Rod Reunion title this weekend in Bakersfield, including four new teams. They will battle for a berth in the eight-car field which will conclude the 2019 Heritage Hot Rod Series.

Mendy Fry and the High Speed Motorsports team have already clinched the crown, and head into the historic facility hot off of a fourth consecutive event win at the Nitro Nationals at Tulsa Raceway Park.

Drag racer and builder Bryan Hall, most recently associated with the Fuel Altered division, is one of the new drivers coming in and campaign a Rooman dragster originally built for "Digger" Dan Horan Sr., who died in 2016. Hall bought the car from Dan Horan Jr. in late 2018, along with a new house that had a longer garage for the dragster. Hall said he built the early Hemi-powered fueler "just to challenge myself. It's definitely an exciting time for the dragster class."

Dan Horan Jr. is fielding his own all-new Pete Kaiser tuned AA/Fuel Dragster as a tribute to his father. The late-model Hemi belted out a 5.87 ET at last year's reunion in his Dad's old car. Dusty Green is out of the "Nitro-Hemi" and into the "Triple Threat." Dusty's new 417 Rodeck hemi-powered beast is ready for action at Famoso.

"It's badass! The class is growing," said Horan.

Driver Frank McBee Jr. and the Valley Thunder Racing gang from Fresno with the fourth new dragster to make its racing debut.