Tue, 2007-01-16 16:01
Following almost a year of supervised testing and months of media speculation, John Force confirmed Tuesday that his second oldest daughter, Ashley, will move up in classification this season to drive a fourth Ford Mustang Funny Car for John Force Racing, Inc., Castrol and the Automobile Club of Southern California.

Ms. Force, who turned 24 last Nov. 29, will drive an 8,000 horsepower Castrol GTX Ford prepared and maintained by first time crew chief Dean “Guido” Antonelli who, for the last 12 years, was a member of the crew that helped John Force win 10 of his 14 NHRA championships. 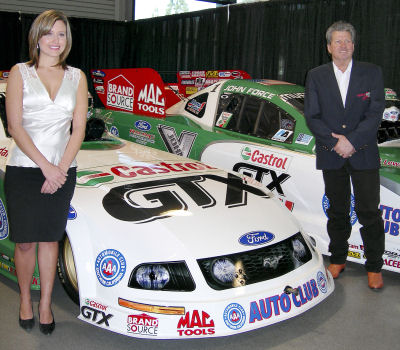 Following almost a year of supervised testing and months of media speculation, John Force confirmed Tuesday that his second oldest daughter, Ashley, will move up in classification this season to drive a fourth Ford Mustang Funny Car for John Force Racing, Inc., Castrol and the Automobile Club of Southern California.

Ms. Force, who turned 24 last Nov. 29, will drive an 8,000 horsepower Castrol GTX Ford prepared and maintained by first time crew chief Dean “Guido” Antonelli who, for the last 12 years, was a member of the crew that helped John Force win 10 of his 14 NHRA championships.

“(He’s) worked around Austin Coil and Bernie Fedderly (Force’s co-crew chiefs) for as long as I can remember,” Ashley said of Antonelli, “and he’s like a sponge, soaking up everything they teach him.  He always has the answer I’m looking for.  I feel real comfortable knowing he’s going to be making the decisions on the car.”

With Antonelli making the tune-up decisions, Ashley covered the standard quarter mile in 4.809 seconds and 4.826 seconds last October during testing at The Strip at Las Vegas Motor Speedway, the track on which she earned her competition Funny Car license last April.  She also was clocked at 320 miles per hour.

“I’ve done all I can do,” Force said.  “Now it’s up to her.  She’s got a great car, a great crew and great sponsors (Castrol GTX, Ford, Auto Club, Brand Source, Mac Tools and Mach 1 air services). She’ll need all of them to compete at this level against (Gary) Scelzi, (Ron) Capps, (Jack) Beckman, Tommy Johnson and the Pedregons (brothers Tony, Cruz and Frank).

“But whatever happens, I’m really proud of her and how she’s evolved.  It’s just good to know that whenever I step out of the seat, the Force name is going to go on with Castrol and the NHRA in this great sport with Ashley and maybe even with her sisters, Brittany and Courtney.”


“For over 22 years, since Ashley Force was a toddler, Castrol has forged a tremendously successful partnership with her father and the John Force Racing organization in winning 15 NHRA Funny Car championships,” said Bruce Firkins, Regional Sponsorship Manager for BP Lubricants USA.

“BP Lubricants USA, Inc. and the Castrol GTX brand are proud to be sponsoring Ashley Force's entry into the Funny Car professional ranks of the POWERade NHRA series.  This is a great moment for Ashley, her family, John Force Racing, Castrol and the fans of the NHRA!   We wish Ashley, her team and all of the members of the Castrol/John Force Racing family a safe and successful season.”

Ashley’s other major sponsors were similarly enthusiastic about her move up to the Funny Car division.

“We are extremely thrilled to have Ashley Force join our Funny Car program with Force Racing for the 2007 season,” said Ford Racing boss Dan Davis.  “Ashley has been progressing through the Ford and Force program the past few years and we’ve watched her grow into a very talented drag racer.  She has the skills and the mind set to be extremely competitive and we can’t wait for the ‘07 season to start.”

“Since 1999, the Auto Club of Southern California has teamed with John Force Racing, the premier drag racing team in NHRA history,” said Auto Club president Tom McKernan.  “Over the years, we have developed a winning partnership, and we are excited about expanding our sponsorship to support Ashley Force in her first pro season, and in her historic step for women in NHRA racing.”

A graduate of California State University-Fullerton where she majored in communications with an emphasis on TV and film, Ashley will be among those competing this season for the Automobile Club of Southern California Road to the Future Award which identifies the NHRA Rookie-of-the-Year.

After spending three seasons in Super Comp, the category in which her younger sisters compete, and after earning her bachelor’s degree, Ashley began driving an A/Fuel dragster for Californians Jerry Darien and Ken Meadows in 2004.

Her first national event victory came in her rookie season in the Top Alcohol Dragster division at the 50th annual Mac Tools U.S. Nationals at Indianapolis, Ind., the world’s oldest, largest and richest drag racing event.  She also won that year at Dallas, Texas, and at Pomona, where she shared the winners’ circle at the season-ending Auto Club Finals with her father as the only father-and-daughter winners in NHRA history. 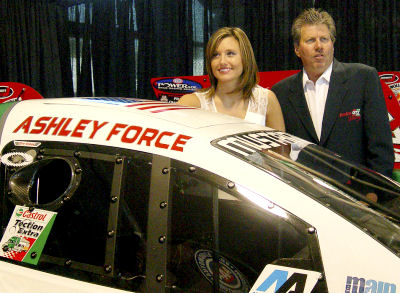 In three seasons in Top Alcohol, the former high school cheerleader went to nine final rounds and won five times.  She finished fourth, seventh and fifth in national points during her three seasons in the dragster.

Just the 10th woman licensed to drive a fuel Funny Car, she will try to become the seventh to qualify for an NHRA national event, the first to reach a final round and, eventually, the first to win a race.

The last female Funny Car driver to qualify for an NHRA national event was Cristen Powell.  Although she won in Top Fuel in 1997, she never advanced beyond the second round in 21 Funny Car events.  She last drove a Funny Car at the 2000 World Finals at Pomona, Calif., failing to make the 16-car starting field.  In the last event for which she qualified, she lost to Force in the first round of the 2000 O’Reilly Fall Nationals at Dallas, Texas.

The most prominent woman to have driven in the division is Shirley Muldowney, who briefly drove a Funny Car in the 1970s before moving to Top Fuel, the category in which she won three NHRA championships.  Although she never reached the Funny Car finals at an NHRA event, Ms. Muldowney was the Funny Car runner-up to Richard Tharp at the IHRA’s 1972 U.S. Open Nationals at Rockingham, N.C.

Ashley joins her father, brother-in-law Robert Hight and Eric Medlen on the team that has dominated Funny Car racing for more than a decade.  Since 1987, John Force Racing drivers have won 168 NHRA tour events.  Last season, Force, Hight and Medlen combined for 10 victories while finishing 1-2-4 in the final POWERade standings.