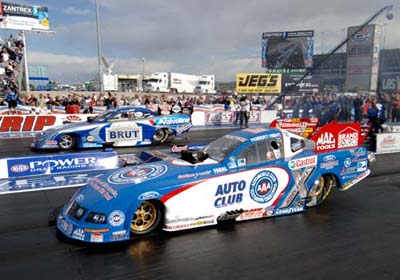 Hight was joined in an emotional winner's circle at The Strip at Las Vegas Motor Speedway by Medlen's good friend Brandon Bernstein, who earned his 13th Top Fuel title, and Greg Anderson, who claimed a track-record fifth Las Vegas trophy in Pro Stock.

"It's amazing how many lives Eric has touched and it's not as fun coming to the races without your best friend and teammate with you," Hight said. "But we needed to come back out here and be with our family, our drag racing family, and realize how many people Eric made happy in his life.

"I never have had much luck at Vegas but I felt like I had some extra help today. Maybe Eric was watching over me. I know having his dad [John Medlen] helping us with the car was special for all of us."

Both Hight and Bernstein, who beat Bob Vandergriff in the Top Fuel final, immediately dedicated their wins to the Medlens. Hight presented his trophy to Eric's father John, while Brandon sought out Eric's mother Mimi and gave her his Wally. Anderson, meanwhile, was able to give Las Vegas-based team owners Ken and Judy Black their fifth hometown win, making the team the most prolific in the track's brief history. This time he beat Jeg Coughlin to get the hardware. 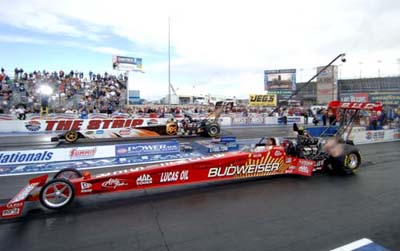 Hight found a way to keep his emotions in check until the race was over, surviving a quirky Funny Car finale against red-hot Capps to win with a 5.126 at 282.90 mph to Capps' 5.592 at 178.57 mph. Both cars went quiet well before the finish line. Capps' Brut Revolution Dodge Charger was out of power first, denying him a chance at three wins in a row. Hight's Auto Club Ford Mustang expired soon thereafter but he had enough momentum to take the stripe first and earn his sixth career win.

"I'm always kind of intense and serious but after seeing Eric and knowing him I want to start smiling more and start letting everyone know how much I enjoy this," Hight said. "I love what I do and it's very special to drive these cars for a living."

The final represented a 40-point swing at the top of the Funny Car standings as Hight moved to within 88 points of leader Capps. Hight is now 6-7 in final rounds, while Capps slipped back to .500 at 24-24 lifetime.

After giving up a sizable starting line advantage, Bernstein quickly tracked down Bob Vandergriff and was side-by-side with him at the 330-foot marker. He simply drove away from there as Vandergriff's UPS dragster struggled to maintain traction. Bernstein zoomed past the scoreboards in 4.521 seconds at 330.07 mph in his Budweiser/Lucas Oil dragster to give his team its first win of the season.

"Every time I was in a final Eric was always there at the top end for me," Bernstein said. "He was there today in spirit and it was awesome to have J.R. [Todd] down there. I can honestly say I loved that guy and I miss him so much. It's definitely great to win this so soon and be able to dedicate it to Eric. I can't wait to see Mimi and give her the trophy. 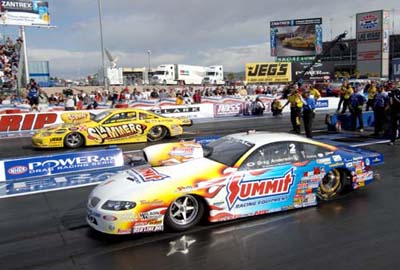 "This was a great turn of events for us. After not qualifying in Gainesville we got behind and knew coming in here we were eighth in the points, which is right on that bump of being in the Countdown to the Championship or not. It's nice to have moved all the way up to third. Now we need to stay up here."

Vandergriff remains winless in NHRA competition but his eighth career runner-up finish lifted him from 13th to ninth place in the standings. Bernstein moved from eighth place to third overall.

Anderson has now won three of the first five races of the year and is already 129 points ahead in the series standings. Coughlin did what he could in the final, leaving the line in .018 seconds to Anderson's .030-second start, but Anderson's Summit Racing Pontiac GTO had caught and passed Coughlin's Slammers/Jegs.com Chevrolet Cobalt by half track, winning with a 6.724 at 205.29 mph to Coughlin's 6.758 at 204.45 mph.

It was Anderson's 46th career victory and his final run was the quickest and fastest of the weekend in his category.

"I sure didn't think I'd be here at the start of the day," Anderson said. "We struggled a bit in qualifying and then lost lane choice after Round 1 and we thought we were in big trouble. It took just about a miracle and somehow we got one with a .003 [second] light. Then we had to race the right lane again against Dave Connolly and we managed to win again. I don't know if that's ever happened to me before."