GETTING TO KNOW KEN BLACK 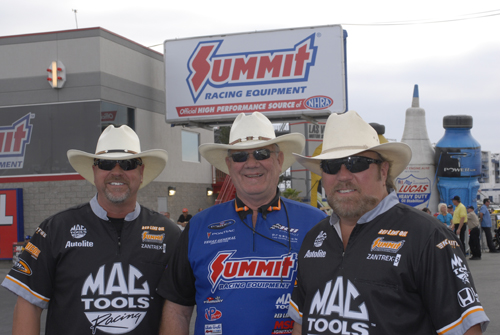 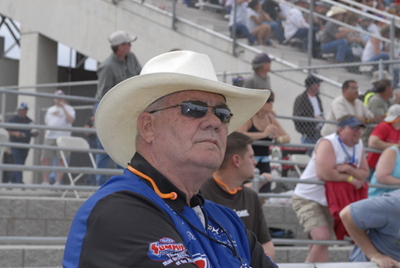 He’s big, he’s imposing, he looks like, in his younger days, he could have lifted engine blocks with one arm – but he’s a pussycat.  Drag racing abounds with nice guys.  Just ask around.  When you’re cruising through the pits, stop someone in a team uniform, any team uniform, and ask them if there are any nice guys around, and the person you question won’t know who to turn to first, there are that many of them in drag racing.  And Ken Black ranks right up there near the top of the list.


His first real brush with national name recognition came during his six year Pro Stock partnership with fellow Las Vegas construction magnate George Marnell, but in recent years it’s his ownership of the two Summit Racing-sponsored Pontiacs driven by Jason Line and Greg Anderson that have vaulted him into the headlines.  When he added the Top Fuel car driven by Hillary Will to his stable it became obvious to everyone – Ken Black is a “player” like few others currently competing in drag racing.


We caught up with him Sunday morning for a little conversation.

He’s big, he’s imposing, he looks like, in his younger days, he could have lifted engine blocks with one arm – but he’s a pussycat.  Drag racing abounds with nice guys.  Just ask around.  When you’re cruising through the pits, stop someone in a team uniform, any team uniform, and ask them if there are any nice guys around, and the person you question won’t know who to turn to first, there are that many of them in drag racing.  And Ken Black ranks right up there near the top of the list.


His first real brush with national name recognition came during his six year Pro Stock partnership with fellow Las Vegas construction magnate George Marnell, but in recent years it’s his ownership of the two Summit Racing-sponsored Pontiacs driven by Jason Line and Greg Anderson that have vaulted him into the headlines.  When he added the Top Fuel car driven by Hillary Will to his stable it became obvious to everyone – Ken Black is a “player” like few others currently competing in drag racing.


We caught up with him Sunday morning for a little conversation.

COMPPLUS:  Ken, why do you do this?

COMPPLUS:  Have you ever raced yourself?

BLACK:  Yes.  The first time I ever went to a drag strip was in 1964, when the old Stardust Raceway (in Las Vegas) opened.  I won a trophy and a jacket, and I’ve been hooked ever since.  I had a ’64 Chevy II with a 283 and a 2 bbl., and I think I went a whole 16-seconds and something with it and probably about 86 miles an hour.  I thought I was really flying. 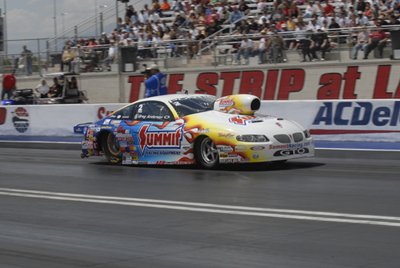 COMPPLUS:  How long were you and George Marnell together, and why did you separate?

BLACK:  We were together six years.  Originally when I went with George I committed for five years, and we brought Greg (Anderson) on in the middle of that fifth year (as a mechanic), and we started doing a little bit better, so I stayed on for one more year.  That’s when my son, Kenny, said, Hey, let’s do our own team.  Greg was driving our old black Firebird, the one he won Bristol with, and my son had put up the money to bring him out here with Vegas General Construction on the side, so that was really the first of those cars.

COMPPLUS:  How difficult was it for you to make the decision to have your race team located in North Carolina when you live here in Las Vegas?

BLACK:  It was kind of tough at first.  Actually, it’s even tougher now because of the facility we have (back there).  We have a complete machine shop where we do everything in-house.  Back when we first started we were just renting space from the guy who owns Jerico Transmissions, so it was kind of his toy shop, and he rented us some space.  He had a dyno.  Well, when we got going and started doing a lot of stuff ourselves, that’s when we met Jason (Line).  It was tough then not to be seeing everything that was being done, but now it’s even harder, not seeing everything every day.  I go back and visit the shop maybe four to six times a year.  I bought a condo in Concord (NC) about 15 minutes from the shop, so I have a nice place to stay when I do go back.  I got tired of staying at the Hampton Inn, so the condo really encourages me to get out there more often.

For the close races like Bristol and Atlanta I’ll try to go in a day or so early so I can visit the shop and see the guys.

COMPPLUS:  How many employees do you have working on the Pro Stock operation?

COMPPLUS:  What tempted you into expanding into adding a Top Fuel team to your operation?

BLACK:  There again, that’s my son!  First I started hanging out with the Technicoat Cowboys (The two large guys always wearing cowboy hats on the starting line.  You can’t miss ‘em! – Ed.)  They introduced themselves to me in Denver about five years ago because of our Las Vegas connection (Technicoat is within a stone’s throw of LVMS. – Ed.)  They were hanging around with the Kalittas as an associate sponsor, and we became friends.  The way I like to tell the story is that in 2004, when we won all of those races, by the time 2005 rolled around, I didn’t have any friends left in Pro Stock, so I started hanging around in the Kalitta’s pits, too.  The Cowboys were kidding around about how I should start a Top Fuel team, and Kenny had come to a few races, and he said we should do it, too. 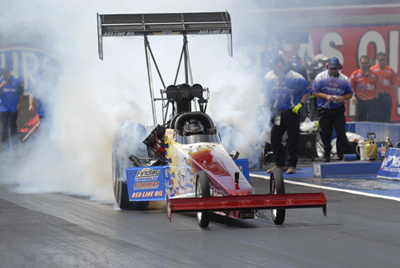 COMPPLUS:  How did you decide on Hilary Will as your driver?

BLACK:  Well, Jim Oberhoffer (Kalitta’s lead tuner) and I got to talking, and I knew diddly-squat about Top Fuel racing, just like I knew diddly-squat about Pro Stock racing.  I’m an owner, not a mechanic.  I did my own mechanical work back in the old days.  My biggest problem is that when I get a wrench in my hands I have a tendency to put too much pressure on it and break things.  I got real good with Easy-outs!

Anyway, we let it be known that we were going to go Top Fuel racing, so we ended up with about 30 resumes.  Hillary did not send in a resume, but we heard about her from John Aiden (the former Mac Tools president who recently left to take a major position with WalMart. – Ed.)  She’d just won the Las Vegas race not too much before that (in Top Alcohol dragster).  She’d started making a name for herself in alcohol racing, and John Aiden had heard of her, and he suggested her, and when John talks, we listen.  Jim-O got in touch with her and she flew out to the Brainerd race at her own expense to meet us.  We both had that good feeling about her.  We felt that she would be really marketable.  We hired her just as much on her marketability as on her driving skills.  We felt she had the potential and the desire.  She presented herself very well.  When she talked to us, that told me something right there about her character.

COMPPLUS:  Are you actively trying to get a major sponsor for her?

BLACK:  We are.  It’s tough out there.  Even the big name guys are having a tough time landing sponsors.  You go talk to these major companies and the first words out of their mouths is ‘we direct all of our motorsports marketing dollars to NASCAR.’  It’s almost as if they’ve all read the same script, which they read back to you.

It was the same in Pro Stock.  We wanted to prove ourselves and then find something, and then we got the Summit deal, and it’s been wonderful in Pro Stock ever since with them and GM racing.  We hope to do the same thing with Hillary.

COMPPLUS:  When Hillary had the incident in testing in January, how upsetting was that for you?

BLACK:  Oh, it about gave me a heart attack.  That kind of stuff is hard on us old, fat guys!  I couldn’t deal with standing out there and watching the car come apart.  I think of her almost like a daughter, so I can imagine how John Force feels about Ashley.  At Pomona I almost couldn’t go up to the starting line to watch.  When Hillary got back in the car here during testing, I wasn’t here, so Pomona was the first time I saw her make a pass after the accident.  Between Jim-O and I we were saying it just wasn’t worth it, seeing this little girl, who appears so fragile. If it was a guy I’d still be nervous, but nothing like what I feel when she’s racing.  When she smoked the tires on the first run at Pomona, I was happy.  After that I was a little more relaxed, but I still have trouble when she runs at night.  I can watch the Pro Stock guys all day long and not get a bit nervous.  Even when Jason crashed it was nothing like when Hillary crashed.

COMPPLUS:  Would winning this race mean more than winning other races?

BLACK:  Definitely, I’d have to put it right up there next to Indy.  Indy’s the ultimate.  If Hillary could win here, that would be really great.

COMPPLUS:  Do you wager on these races because they take action here at the Station Casinos?

BLACK:  I don’t bet at all.  I learned a long time ago that they don’t build those big fancy places because people win their money.

COMPPLUS:  Would you consider expanding your team to add a Funny Car?

BLACK:   No, I have no desire to do that.  Not that we wouldn’t want to some time down the road if we had the funding for it. Right now I’m plenty busy with the Top Fuel car and the two Pro Stockers.

COMPPLUS:  What do you think it takes in terms of dollars to run a Top Fuel operation?

BLACK:  I think a guy could run a pretty successful program for a sponsor for two to two-and-a-half million.  That would be a minimum.  In my situation, where I wouldn’t have to take any money out of the car, where everything would go into the team, I think about two-and-a-half is the right number, but it would be nice to have a cushion if you could get to three million.  That would provide a little extra for R&D and testing.


One thing you probably haven’t heard is that we’re setting up a new company to build clutches for Top Fuel cars.  We hope to have it in operation by some time in May.  Bob Malek is going to run the company, along with some additional help.

COMPPLUS:  How important do you think a million dollar winner would be towards enhancing the sport’s image to the corporate community?

What’s amazing is that we can go out there and field a really competitive team for a fraction of what it costs to field a Cup team, but yet the (corporate world) just doesn’t seem that interested (in drag racing).