STEVENS ON A ROLL HEADING INTO TIN TOPS

Fri, 2007-04-20 11:28
Drag Racing champ Brett ‘The Boss’ Stevens will be back on his home track at Willowbank Raceway, Queensland, on April 28 to turn up the heat for Round 6 of the Australian Top Doorslammer Championship at the QT Tin Top Titles. 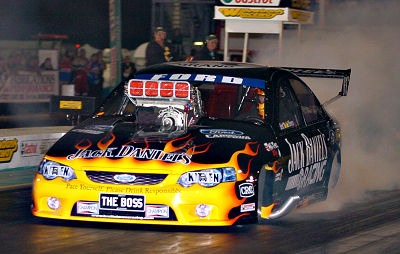 Drag Racing champ Brett ‘The Boss’ Stevens will be back on his home track at Willowbank Raceway, Queensland, on April 28 to turn up the heat for Round 6 of the Australian Top Doorslammer Championship at the QT Tin Top Titles.

After back to back wins in the last two Rounds of the National Championship in Sydney and Perth with some stunning performances in his 3000 horsepower Jack Daniel’s Racing Falcon, Stevens is hoping his roll of will continue at the Tin Tops in order for him to challenge for the 2007 Australian Championship.

“We have really got on top of the setups for the Falcon’s now, with the competition so tight in Top Doorslammer this year we have been experimenting a bit with some new innovations and it is now paying off,” Stevens said.

“It is a great accomplishment for the team to get back to back wins and this has put me back in contention for the 2007 Australian Top Doorslammer Championship and we won’t be holding anything back at the Tin Tops.”

“With just two Rounds remaining there are 4 people, including myself, who can still win so there is sure to be plenty of action on the track.”

“In Sydney in February I set a personal best time of 6.01 seconds at 242 mph (390 kph) and I will be hoping to better this again at Willowbank this weekend.”

This season has so far seen 26 different drivers competing in the professional Top Doorslammer category and with only an 8 car Finals field at each event, has subsequently seen the record book thrown out the window with of the quickest fields in history.

Rising to the challenge has been Brett Stevens Racing Crew Chief and rookie Doorslammer driver Steve Packman in the Glenfords Racing Falcon Top Doorslammer, who has shown he is already a threat to any competition after making his way through to the semi-finals in the last Round of the Championship.

“We are finally getting down the track with competitive times and now have a package that will see big things for the team,” Packman said.

“We have three Top Doorslammers running at the Tin Tops with Brett (Stevens), Kath (Stevens) and myself and the aim is to get all of the cars qualified in the field for the Finals.”

“My Falcon has been running great and the more laps that I do the more confident I am behind the wheel which I think is now showing on the time sheets.”

“I think that Kath will also be a dark horse at the Tin Tops now we have ironed out a few gremlins that have plagued her car in the last couple of Rounds.”

The Tin Top Titles is Australia’s premier Drag Racing event for sedans, headlined by the professional Top Doorslammer and Pro Stock categories as well as featuring numerous other support brackets in a full day of action packed entertainment.