Foley, Cannon Jr., Munroe and Mansfield also qualify at the top of their classes in front of one of the largest crowds in Rockingham Dragway history

The perfect weather and ideal racing conditions made for a sizzling evening qualifying session at the IHRA Spring Nationals presented by Advance Auto Parts and Castrol in Rockingham, N.C. With the race teams taking advantage of the spring-like air, the North Carolina racing fans took advantage as well…filling Rockingham Dragway to capacity in what ended up being one of the largest crowds in the history of the fabled drag strip. 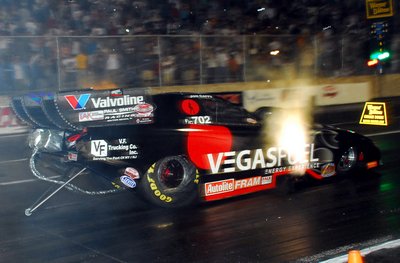 Jon Capps, Las Vegas, Nev., gave the capacity crowd a thrill when he blasted to a 4.974 at 289.94 mph to claim the top qualifying spot in the Knoll-Gas Torco Racing Fuels Pro Nitro Funny Car class. Capps, piloting the Vegas Fuel ’05 Monte Carlo in just his second-ever national event, waited until Saturday evening to put his best foot forward. He was sitting on the bump spot after the first two qualifying sessions, but his clean Saturday evening pass put him at the top of the qualifying sheet and also secured him Last Man Standing honors.

“We needed those bonus points after what happened in San Antonio,” Capps, who was assessed a black flag penalty at the season-opening Texas Nationals, said. “The track was great. IHRA and the staff at Rockingham Dragway did a great job of getting this track ready.”

Capps actually clicked off early on his run but still was able to clock the quickest time of all qualifying sessions.

“It started to labor a little bit so I clicked it off early,” Capps said. “I didn’t want to hurt any parts because we want to go rounds tomorrow.” 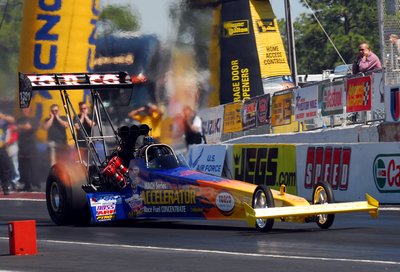 “That’s what we’re excited about, that’s what matters,” Zizzo said of the five bonus points. “Those extra points could end up meaning a whole lot at the end of a tight world championship points race.”

Foley will face Scott Weis in the first round of eliminations Sunday afternoon. Litton will square off with Bobby Lagana Jr. while Zizzo will do battle with Scotty Cannon. No. 4 qualifier Michael Gunderson will face No. 8 qualifier Mitch King in the remaining first round match-up. 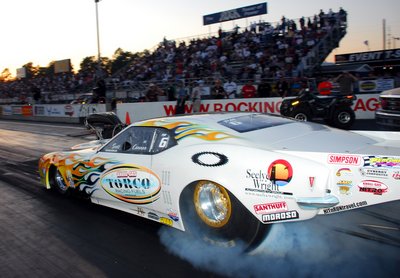 Scott Cannon Jr. was the only Torco’s CompetitionPlus.com Pro Modified car to run in the five second range at Rockingham…and he did so twice. Cannon, Lyman, S.C., claimed the No. 1 qualifying spot with a 5.992 pass Saturday morning before a 5.998 pass Saturday evening garnered him Last Man Standing honors.

“We had her jacked up,” Cannon said. “We didn’t do too good at the last race and we wanted to get the Last Man Standing. We need all the points we can get.” 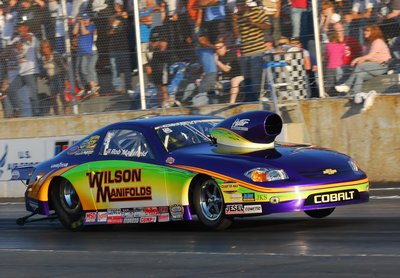 Rob Mansfield, Bradenton, Fla., had a very profitable Saturday evening qualifying session. In fact Mansfield didn’t do too badly Friday night, either. He qualified at the top of the sheet with a stout 6.333 at 217.98 mph in the Saturday evening session. He also was the Quarter-Max Pro Stock Challenge, claiming five bonus points for the second consecutive night.

“This is pretty special,” Mansfield said. “It was a nice run that felt really good. The crew did an excellent job and I’m really proud of them. It was a difficult run, trying to focus on the tree with that big ball of sun at the end of the track, but I got through it and it worked out.”

Jeff Dobbins, Wilmington, N.C., did not qualify for the field, but he did not walk away empty-handed as his 0.016 reaction time earned him the Wayne-Dalton “Turn on the Lights” award. 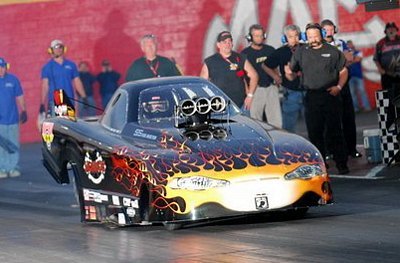 Terry Munroe, Beaver, Pa., came out swinging this season. After his win in San Antonio at the Texas Nationals he said his race team was serious about chasing the world championship this season. He backed up this talk by claiming the Alcohol Funny Car pole at the IHRA Spring Nationals…his second No. 1 qualifying effort in as many attempts this season.

Munroe drove his ’05 Monte Carlo to a 5.804 in Friday qualifying, a number that stood up after both Saturday qualifying sessions. Defending world champion Mark Thomas, Louisville, Ohio, ended up second on the qualifying ladder with a 5.813, 245.94 pass. Though he was second on the sheet he did claim Saturday Last Man Standing honors and the five bonus points that come with it.

“I love this track,” Thomas said. “I have won more at this track than any other on the IHRA tour. I love coming here and it has always been very good to me.”

Professional eliminations are scheduled for Sunday at 10:30 p.m., 12 noon, 2 p.m. and 4 p.m. For more information, log onto www.ihra.com. The Spring Nationals presented by Advance Auto Parts and Castrol is the second of twelve events on the $19.5 million 2007 Knoll-Gas Nitro Jam Drag Racing Series.

First-round pairings for professional eliminations Sunday for the Spring Nationals presented by Advance Auto Parts and Castrol at Rockingham Dragway, the second of 12 events in the $19.5 million 2007 Knoll - Gas Nitro Jam Drag Racing Series.  Pairings based on results in qualifying, which ended Saturday.