Fri, 2007-05-18 18:15
Top Fuel driver Melanie Troxel is an avid drag racer with a mind-set that won't allow her to ever back off, empowering her instead to charge forward until the race is over. That spirit led her to her first win of the 2007 season in Madison, Ill., bringing her Top Fuel total to three in the sport's premier class. In the days after the event, Troxel took time to reminisce about her win, talking openly about the events that led her back to the winner's circle and the hectic schedule that followed that winning performance.

“St. Louis is one of those races where you just don't know what's going to happen,” said Troxel. “We weren't the fastest qualifier, but when it comes to race day at Gateway Int'l Raceway, it doesn't really matter what anybody ran on Friday night. It's who can handle those tricky track conditions. We were fortunate to be able to do that better than anyone. 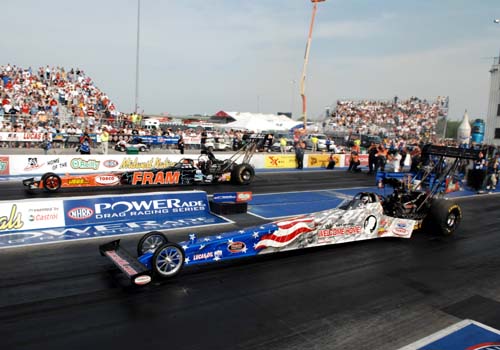 Top Fuel driver Melanie Troxel is an avid drag racer with a mind-set that won't allow her to ever back off, empowering her instead to charge forward until the race is over. That spirit led her to her first win of the 2007 season in Madison, Ill., bringing her Top Fuel total to three in the sport's premier class. In the days after the event, Troxel took time to reminisce about her win, talking openly about the events that led her back to the winner's circle and the hectic schedule that followed that winning performance. 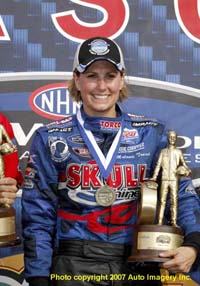 “St. Louis is one of those races where you just don't know what's going to happen,” said Troxel. “We weren't the fastest qualifier, but when it comes to race day at Gateway Int'l Raceway, it doesn't really matter what anybody ran on Friday night. It's who can handle those tricky track conditions. We were fortunate to be able to do that better than anyone.

“For example, we didn't have lane choice until the final. We pretty much were told what lane we were going to run all day long. I know some teams had a preferred lane in St. Louis, but part of the game is being able to get down either lane. Both lanes were tricky. We had made some decent qualifying runs in both lanes, so we were able to carry that information through on Sunday and utilize it.”

As Troxel relates, one of the more dramatic moments of her Sunday in Madison was in the quarterfinals, a time she believes was the turning point of the day.

“Most of the dragsters did smoke the tires in the second round, and we were no exception,” said Troxel. “I knew the track was going to be harder and tougher to get down, and I think we smoked the tires the earliest we had all weekend. As a driver, one of the toughest things is to lift off that throttle and wait. You're basically watching that other car drive away from you.

"It's very hard not to be tempted into putting your foot down too early. I've really had to work to get to where I'm better at that. Richard [Hogan, crew chief] has been on me to give the car more time to settle down before I put my foot back down on the throttle. After I pedaled it, the car settled down really well and hooked back up, and we were able to move around [Bruce] Litton. After the fact, I felt really good I was able to make that work.”

Finally, in the money round, Troxel held off the charge of rival Cory McClenathan. Although he lost traction almost immediately, he eventually recovered, andTroxel found herself out of power just before the 1,000-foot mark, leaving her drifting to the finish line and praying she'd get there first.

“I couldn't see Cory at all,” Troxel said. “My first ever NHRA Top Fuel national event final was against him [2000 in Dallas] and I lost, so it was kind of fun to come up against him again. I remember that day, but he probably doesn't remember it was my first final. I felt like I owed him one and that now it was my turn. 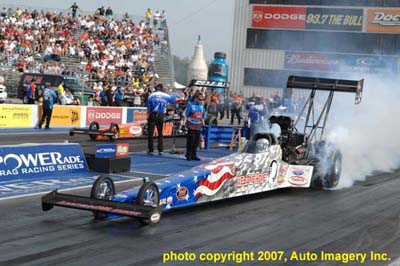 “I had no idea he had smoked the tires, so as a driver it's a good sign when you haven't smoked the tires by half-track and you don't see the other car. Our car had gone out to 900 feet before it chewed all the teeth out of the center of the blower belt, at which point I was coasting. You keep looking for him to come around you, but you don't know if they ever left the starting line at all. There's a chance they're going to be over there and you wait, hoping he doesn't come around you.

“I was so focused on looking in his direction that I actually didn't see my win light come on. I didn't know until I pulled in at the far end when everyone started coming over to the car. It was a big relief when I came around the corner and they pulled us over to the TV cameras.

“At that point, you have so much adrenaline and so much going on in your mind. You're not sure of anything, so there's a big sense of relief when you climb out of the car and take that deep breath. Then and only then could I relax and enjoy it.”

An experienced racer, Troxel well knows the effort required to field such a winning race car. Understandably, she's very happy with her place in the cockpit of the powerful Vietnam Veterans/POW-MIA dragster and is quick to recognize the talented crew behind it.

“Certainly, I would be the first to tell you I couldn't tune one of these cars," said Troxel, who has been racing professionally since 2000. "It's a very tough profession to be a crew chief on one of these cars, and Sunday in St. Louis just proved how tough it is.

“There weren't many cars that got down that track, and we did. We made a few impressive runs, which is the sign you could be pushing things a little too far. On a track like that, it's the smart way to race. Richard went up there Sunday, and all of our runs weren't perfect. We spun the tires down the track and lost a few blower belts, but that's the trick -- knowing how hard you can push it and how much of a chance you're willing to take.” 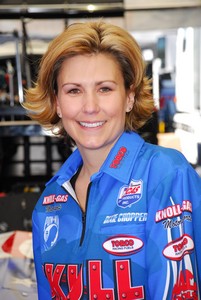 Having won for the first time in more than a year, one would think that Troxel would have remained at Gateway Int'l Raceway long after the race's conclusion, rejoicing in her victory with her crew. However, with the comforts of home a few hours away, a prompt departure and preparations for the next race received top priority, with any true celebrations temporarily put on hold.

“We were too close to home to not make it back that night,” said Troxel, an Avon, Ind., resident. “We really would have liked to have stayed with the guys and celebrated a little bit, but I think the crew had the same idea, so we packed up the pit area and put everything inside to be ready to go.

“After all, our mood on Sunday had been more of relief to simply get into the winner's circle again. It had been over a year, and even though we had a few runner-up finishes, our record as a team was two wins in 10 final rounds [updated overall record 3-13]. You know the law of averages has got to kick in sometime, so we were due another win.

“I did have a bottle of champagne that one of our neighbors had given to me after we won Pomona last year, but I just didn't feel right about drinking it in the middle of the week, thinking it needed to be saved for an actual event. We dragged it out of the motorhome for the winner's circle in St. Louis, opened it up and sprayed it on everyone probably a lot more than we drank it. We made it home Sunday night to sleep in our own bed.”

Powered by its recent success, the Torco Race Fuels-sponsored team owned by Lucas Oil Products CEO and Chairman Forrest Lucas was back in its Brownsburg, Ind., shop the following morning preparing for the next race. There was no rest for this wearied bunch, who acknowledged the win truly didn't sink in until later in the week.

“We went right back to work, doing a little thrashing to get the new seat-belt system in the car, so we didn't take a break for the first couple days after the win," said Troxel. “We finally did get the opportunity on Thursday to go out with the team and celebrate the win with some Mexican food and well-deserved margaritas.”

“We had heard a lot about Lucas Oil Speedway over the past year or so, and we were looking forward to the opportunity to come out and see it,” she said. “We came down Saturday morning for their two-day racing event and were just so impressed by the facility. I don't have that much dirt-track experience, but Tommy raced on some dirt tracks and grew up going to more of them from his time in Iowa. He said it was the nicest dirt track he had ever seen. You can see how much hard work Charlotte and Forrest had put into that facility. 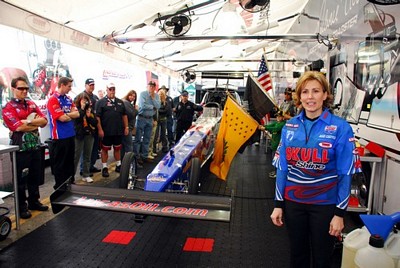 “It's amazing the number of drag racing fans in Missouri that came out just because of us being there. We got to spend some time with fans that we normally see at the drag races. In fact, someone brought me a small vase with flowers in it as a Mother's Day gift from Rottie and Peanut [Melanie and T.J.'s Yorkshire terriers]. That just goes to show the attention people pay to what's going on in our lives. We signed a ton of autographs and met a lot of new people. I would have loved to have spent the entire weekend out there with the Lucases on their ranch. We're looking forward to the opportunity to go back out there and see a little bit more.”

While she was in Wheatland, her teammate Morgan Lucas was also active, joining pal Brandon Bernstein in California to attend a charitable benefit for their great friend Andy Robles, racing Charlotte's Super Comp car in his memory at Auto Club Dragway at California Speedway in Fontana.

With an unexpected few weeks off because of the postponement of the Bristol, Tenn., race, preparation continues at the Morgan Lucas Racing shop, and the sense of winning remains strong.

“It takes a huge amount of pressure off of us to make it to that winner's circle again,” Troxel said. “We moved up four spots in the points and are less than a round out of third [four points], so we're definitely in the hunt. With Bristol being rescheduled, we ended up with an extra couple of weeks before our next event. The way I look at it, that's a couple more weeks for me to enjoy being the most recent NHRA race winner.”