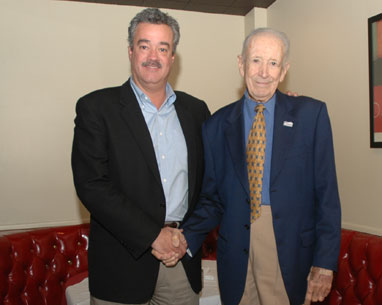 Tom Compton gets frustrated, too.

The president of the National Hot Rod Association clearly understands the frustration of drag racing fans when their ESPN2 broadcasts are preempted by live sports or shown at times when most are likely to be asleep.

“I can totally understand,” said Compton. “I get frustrated right along with everybody else, but then you have to look at the reality of what is out there and what are the alternatives. You have to kind of drill down a bit to understand why we’re doing what we’re doing right now.”

Compton isn’t afraid of the 800 pound gorilla in the room, which today appears to be shortcomings associated with the series’ television package. He’s carefully studied the situation and understands that just flipping a switch might ease concerns in the short term but in the long term will provide no better solution.

“Like it or not ESPN has the most households out of the sports cable networks right now,” Compton said. “They’ve got about 97 or 98 million households on ESPN2, and there is no one on that level at all.”

Compton takes the issue home with him at night. It’s part of the job, although it wasn’t in the original job description. If he didn’t love the job he’d simply leave it in the office when he walked away.

“It’s total immersion,” Compton admitted. “I love it or I wouldn’t be doing it.”

The television broadcast issue isn’t one which has cropped up overnight.

When Compton first took over as the third president of the NHRA back in January 2000, the broadcast of NHRA drag racing was split amongst as many as five different networks. The initial focus was on finding a steady single network to cover the series. In 2001, the NHRA inked a deal with ESPN2 to broadcast as many as six hours of coverage during a national event weekend.

“If you recall, soon after that we went through the greatest period of growth the sport has ever seen, from ’01 to ’08,” said Compton. “We also replaced both series sponsors. Winston, which was legislated out of the ’01 season, we were able to replace them with the Coca-Cola company. This was about the time Federal-Mogul filed for Chapter 11 protection and we didn’t have a sponsor for that series either and we were able to bring on Lucas Oil.”

Compton believes a primary reason both of these entities signed on was the potential of this package.

Fast forward to the economic downturn of the 2000s, a time when the economy tanked and football expanded its broadcast presence.

“Last fall we ran into the situation during the Countdown with our Saturday qualifying shows running into football,” said Compton.  “Each year every network, not just ESPN, puts more and more football content on their network. People watch football and they just can’t seem to get enough of it, so that crowding-out effect has gotten worse and worse over the years.

“In the fall of this year it hit kind of a turning point where we were on late at night for those six races on Saturdays while Sunday shows were relatively good. That’s a huge problem and that’s a problem that drives us crazy, but you have to look at the realities of television. Do you really want to switch networks for six qualifying shows and see your household numbers cut back severely? Do you want to see your ratings fall off?” 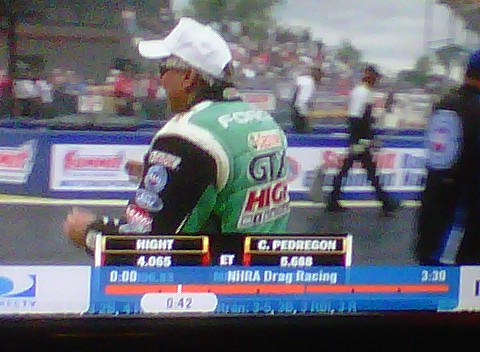 Compton also added there will be more changes aimed at bettering the presentation as the landscape of broadcasting changes.

“It’s a fluid world and things are changing rapidly in the television world with all the new sports channels coming online. The landscape keeps changing fast and we’ll just have to see what opportunities that creates or doesn’t create down the line,” said Compton.

NHRA’s broadcasts on ESPN2 have been preempted many times by live broadcasts, and sometimes by obscure sports, routinely drawing the ire of race fans and in many instances racers themselves. Count Compton in this group, although it remains more of personal frustration than an outward exhibit. He is challenged to see the issue from both sides.

“I was trying to watch a basketball game the other day that got preempted because the basketball game that was on went to overtime and the bottom of the ticker said ‘Stay tuned this game will be on immediately after this game,” said Compton. “Live programming can bump you with any sport; it’s not just our sport. Because they’re going to finish the game that’s on and then go to the next game. They’re not going to stop it right in the middle of overtime and you don’t get to see who wins.”

This is of little solace to Compton, who last season, along with ESPN, gave live television a try with semifinal and final round coverage at the NHRA Spring Nationals at Royal Purple Raceway. In this world of ‘if you can’t beat ‘em, join ‘em’ mentality, Compton revealed the Houston experiment had pluses and minuses, and provided enough inspiration for another try in the future.

“It was a mixed bag. We learned that we’re going to maybe one day experiment with that a little more,” Compton said. “On one hand we saw fan engagement as well as social media was up quite a bit and that was neat to see. The downside of that is we’re at the mercy of an oildown or the mercy of a rain shower.”

Compton points out that the current format of drag racing’s presentation is long, with its four-and-a-half hours to complete in a perfect scenario. During the one-off Houston experiment, professional teams were cut to a 55-minute turnaround. The challenge is ensuring that there’s no more than 30 minutes of downtime.

“Some fans really liked it and got more engaged, especially on the social media sites,” Compton said. “Other fans didn’t like that half hour of down time; they complained about it, so the jury is still out. We’re going to experiment some more with that. We’ll be making some announcements in the future about what we’re going to do this season, but I think the jury’s still out on it.”

Starting in 2011, the NHRA offered a measure of live coverage through ESPN’s Internet live streaming property ESPN3.com with Sunday’s final eliminations and then expanding to Friday evening’s final sessions.

Compton couldn’t say for certain if the ESPN3.com broadcasts have helped or hurt the network airings. He did point out they are smaller than those of the network broadcast.

“That’s a good question,” said Compton. “ESPN3 is really in its infancy right now so it’s really too early to tell. The numbers are really small compared to our television viewership. Having said that it is something we’re interested in and something we’re probably going to promote going forward and see how it goes.”

In an age of instant gratification, Compton admits that live streaming could be a way to supplement the overall presentation and in turn grow the market. There could be a move to increase awareness, as well as the presentation.

The presentation, Compton believes, is very good in its approach, but needs to better promote the stars, a 180-degree turn from the original push by NHRA founder Wally Parks to make the cars the stars. While the sport, Compton believes, must be experienced live to get the full visceral impact, the personalities can be portrayed with full effect with the proper broadcast presentation.

“We need to work more on star building,” Compton said. “We need to work on the stories of the crews, of the drivers, of the owners. A good example is when you watch the Olympics there are maybe a couple of people you recognize from a couple of years ago but most of them you don’t even know. In two to two-and-a-half hours stars have to be created. You have to understand where they came from and their background so you know who you want to root for. We need to do more of that. I think that would be one area I could bring to them that does need some improvement.” 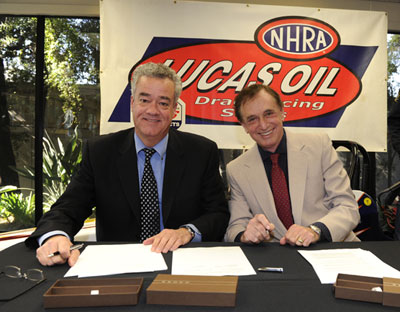 Compton says this is a plan already in action.

“On the flip side, the drivers and I know there are certain sponsor obligations and things that get in the way of all of that, but they need to let their personalities out and be themselves,” Compton said. “Everyone has a unique aspect and would be of interest to our fans. That’s something we want to work on with the drivers, so fans can get to know the folks who make our sport today while sitting in their living rooms.”

To make this work, Compton said, they’ve reached out to those who they are trying to build, the teams themselves, for input. Sources have indicated the most recent PRO meeting focused on the NHRA’s television package and how it can be improved.

“To say that we’ve been meeting lately would be true, but we’re always meeting with the teams and the owners and the drivers, sometimes the crew chiefs,” Compton said. “We’re meeting with our sponsors and tracks, constantly believing multiple heads are better than one. We meet with the stake-holders in the sport all the time to try to get their perspective, their objective, their concerns and their ideas and suggestions, which are very important, too.”

Along with the helpful input, Compton said he also continually faces critics who neither offer specifics nor solutions. At least one team, who asked to remain nameless, confirmed with CompetitionPlus.com that a presentation with a major sponsor was met with an article proclaiming the sport was dead, at least in terms of television broadcasting.

“I will say that blanket across-the-board, negative statements, ‘The sport’s horrible, TV’s horrible’ don’t do anyone any good. People are out there looking for sponsors and sure if the only thing you’ve heard about the sport is you’ve read a couple of these negative editorials there’s no good that can come out of that. I can’t think of anything positive that would come out of blanket negative statements that come out externally about the sport.

“We all work under this umbrella called NHRA, and all should be promoters of NHRA and we can talk about the things that need to be improved in a very tangible way. Blanket statements like that do everyone out here a big disservice.”

The NHRA is locked into a contract with ESPN through 2016 when a five-year contract was tacked onto the end of a deal initially scheduled to end in 2011. And for Compton, he feels the best choice for now is to focus on the positives, one of which he points out was the fact that the NHRA broadcast was No. 1 for the network’s weekend offerings 60-percent of the year.

“The ratings are relative,” Compton added. “We’re doing pretty good and we’re on the number one sports network with the most households and highest ratings.”

“You have to look at the reality of what’s out there,” Compton said. “In the future some of these new sports channels are going to grow. There is certainly demand for that and at some point they will pose more of a challenge or become true competition for ESPN, but right now they’re not quite there.”

The truth being, in sports, no one is ever “quite there,” as there is always room for improvement.