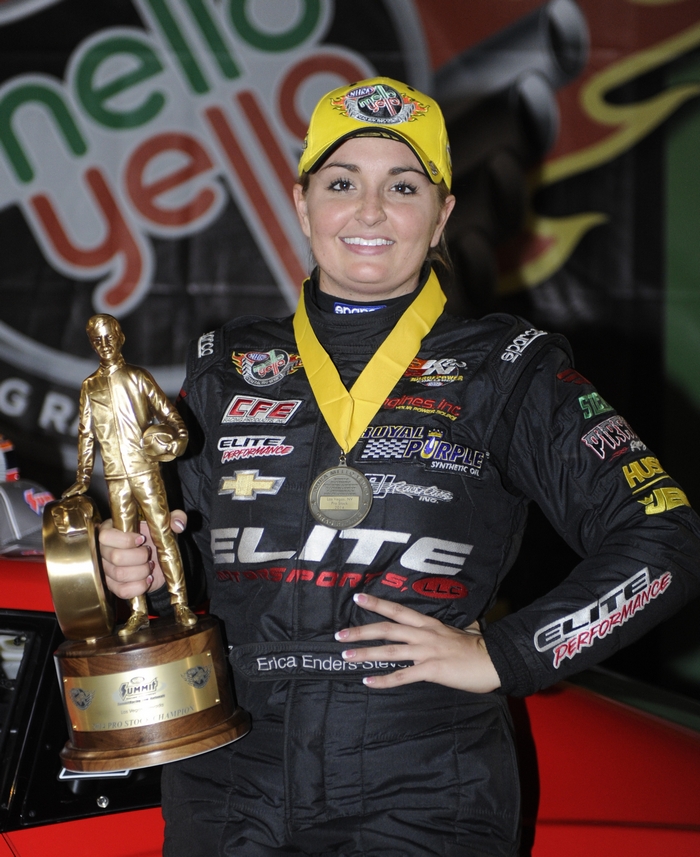 The 2014 NHRA Pro Stock season was one for the history books for Erica Enders-Stevens.

The 2014 NHRA Pro Stock season was one for the history books for Erica Enders-Stevens.

Despite Enders-Stevens unparalleled success, her team owner Richard Freeman of Elite Motorsports confirmed to Competition Plus she is not scheduled to run a full season in 2015.

“Right now we are scheduled to run 15 races,” Freeman said. “We have the funding to do 15. We did get some good news (at the Winternationals) we didn’t know we were getting a little bit of extra money from GM, so that will help. It takes about 1.5 to 2 million dollars to run our program for a year, and we have about 1.2 million accounted for, so I’m sure we will go to more than 15 (races), but when we started this year, that’s where we were parked at. We will see how it goes and play it by ear.”

Freeman acknowledged NHRA’s Western Swing – races at Denver (July 24-26), Sonoma, Calif. (July 31-Aug. 2) and Seattle (Aug. 7-9) are the most costly to attend. Enders-Stevens skipped the Sonoma and Seattle events a year ago.

“The Swing is something that is very expensive to do because of how far it is and you have to be on the road for three weeks in a row,” Freeman said. “That’s something we will definitely look at, and we also have to look at points. We will see how the year stacks up. We have three really good cars right now with (Drew) Skillman coming over and Brogdon and that can help us stay out here. We are just playing it all by ear right now.”

“We have had a lot of phone calls and people who have been congratulatory, and we have great fans, but at the end of the day nobody has stepped up and wrote a check,” Freeman said. “We feel like we have something to market and we are just going to keep plugging along. We’ve done all the right things and hired the right people and I have all the right people to repeat (a championship) this year. I’m not saying we are going to, but we do have the right people in force. We have not got funding, but there are some things moving around, so we will see how that goes.”