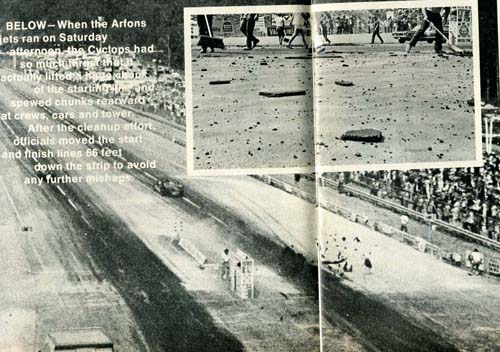 
If you think the management of Bristol Dragway had a tough time back in May with the postponement of the event, roll back the time machine to 1971 when, in the middle of a national event, an exhibition jet car removed the asphalt in chunks with the rap of the afterburner.

What can you expect from a car called the “Super Cyclops?”

Track owner Larry Carrier knew the car was a big draw when it reeled off the sport’s first five-second run with a 5.96 elapsed time at over 280 miles per hour. It was the encore that caused everything to go all to hell.

The powerful J-79-powered (the same as the Bob Motz Kenworth) blew large chunks of the asphalt through the ground floor windows of the control tower.

Race over? Not hardly if you know Carrier.

That may seem ludicrous in today’s drag racing world, but for that era it was par for the course said Don Schumacher. He should know. Not only did he have a front-row seat for the cascading asphalt, Schumacher also worked his way to the winner’s circle.

Today’s tuners would suffer cardiac arrest on the spot.

“It was really no big deal to us,” Schumacher said. “We’d adjust this and adjust that because that is just what we did. Remember we match raced every week and we found a way to adjust to every situation we encountered. Remember, we used to race on old airstrips back then. We just did what we had to do, even on that weekend.