Tue, 2007-07-31 12:18
Throw together a absolutely huge car show, record-setting Outlaw-track acrobatics and what do you get? Why, Fun Ford’s annual extravaganza at Summit Motorsports Park in Norwalk, Ohio, of course!

Throw together a absolutely huge car show, record-setting Outlaw-track acrobatics and what do you get? Why, Fun Ford’s annual extravaganza at Summit Motorsports Park in Norwalk, Ohio, of course! 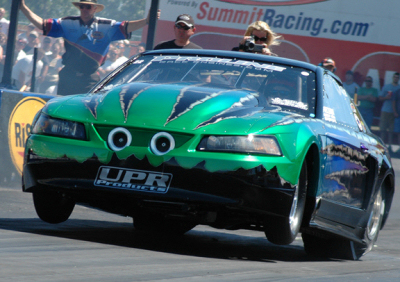 Full Throttle Kustomz in Beford, Ohio, was the title sponsor at this year’s event at Summit Motorsports Park, which is probably the finest drag racing facility in the country, period. The food concessions are simply the best and the ice cream alone is worth the price of admission.

Tim Lynch grabbed the low qualifying position in Precision Turbo Street Outlaw with a record setting 6.807 at 214.45.  Houston winner Jimmy Keen followed in second with a 6.946/209.49 with Brian Carpenter in third. Scarry overcame a huge wheelstand in the opening qualifying round, repaired the damage and came back to qualify fourth. Brian Keller from nearby Chillicothe, OH rounded out the field with his Ford Fairmont, which ran an 8.415 at 156.75. 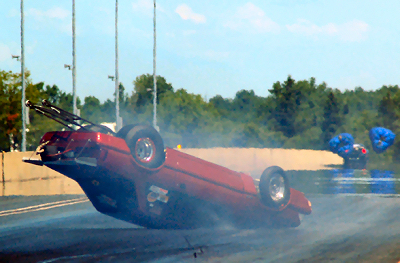 Eliminations started off with a bang when Ray Orbas met Conrad Scarry in the opening round. Orbas got crossed up off the start, bounced off the wall and flipped upside down as Scarry streaked to a 7.379 victory. Once the clean up was done, Jim Brown who had hurt his engine earlier during qualifying, singled after Carpenter couldn’t make the call. Keen and Lynch also singled to set up a big second round showdown between Carry and Lynch. Carry was off the line first with a .030 light, but Lynch powered by for the win with a 7.034 to 7.304 victory. Keen, in the meantime, ran a 7.089/204.51 single when Jim Brown was unable to make the call.

In what promised to be a dramatic final, Keen knew he had to roll the dice at the tree to have a chance to win. But it didn’t quite work out. Keen lit the dreaded redlight with a .-0.003 reaction time. Lynch, seeing the victory light, got out of the throttle to record a 9.108 winning time over Keen’s quicker 7.108 to pick up his first win of the year.

In other action, ProCharger Renegade saw Travis Franklin solidify his bid for the season championship when he beat Timmy Smith 8.100 to 8.945 for his second win of the year. Tom Conrad, Jr. won in Borla Street Bandit over Josh Short. Gerry VanVeen of Stckbridge, PA was the victor in Tough Truck over Robert Chumran. 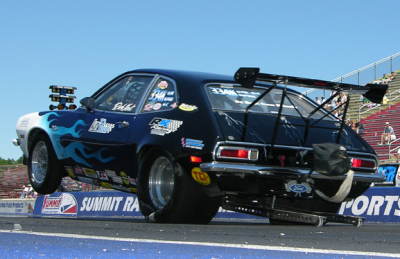 JDM Engineering had a banner weekend as Jim D’Amore and Jim III both won in different classes.  Jim Jr. capitalized on a huge .863 holeshot over Chris Parisi to almost coast to the win in Ultra Stang while the younger D’Amore won in Street Stang by using a .018 holeshot and a 12.516 on a 12.50 to beat series regular Mark Anderson, who was second in points coming into this event.