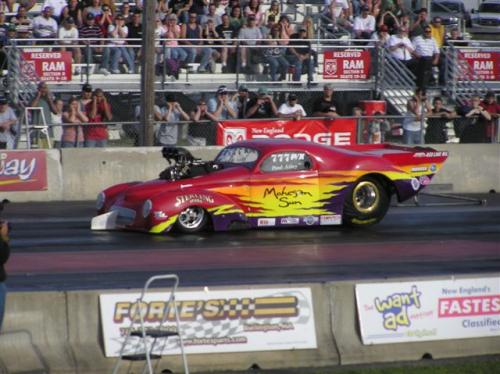 Athey won the Chicago Style event from the #1 seeded position.

Salvadore, the #2 seed, fouled negating the need for Athey’s incredible .002 reaction. That worked well for Athey as he lost traction and drifted dangerously close to the wall before aborting the run.

"This has been an odd day with the persistent rain, but also a great day for the entire Red Eagle Racing team,” said Athey. "We had over 100 guests in our hospitality area and most of them stayed all night through the rain to watch the conclusion of the race. We entertained guests from our partners Mohegan Sun, Sterling Homes, and Computech Transmissions of Norwich, CT. Paul Mennette from Cruisin' New England magazine was also on hand with his camera crew to get some footage with our team for an upcoming television show. It ended up being a perfect day at the races. We qualified number over some great competition and won the race in front of our hometown crowd and with most of our partners present."