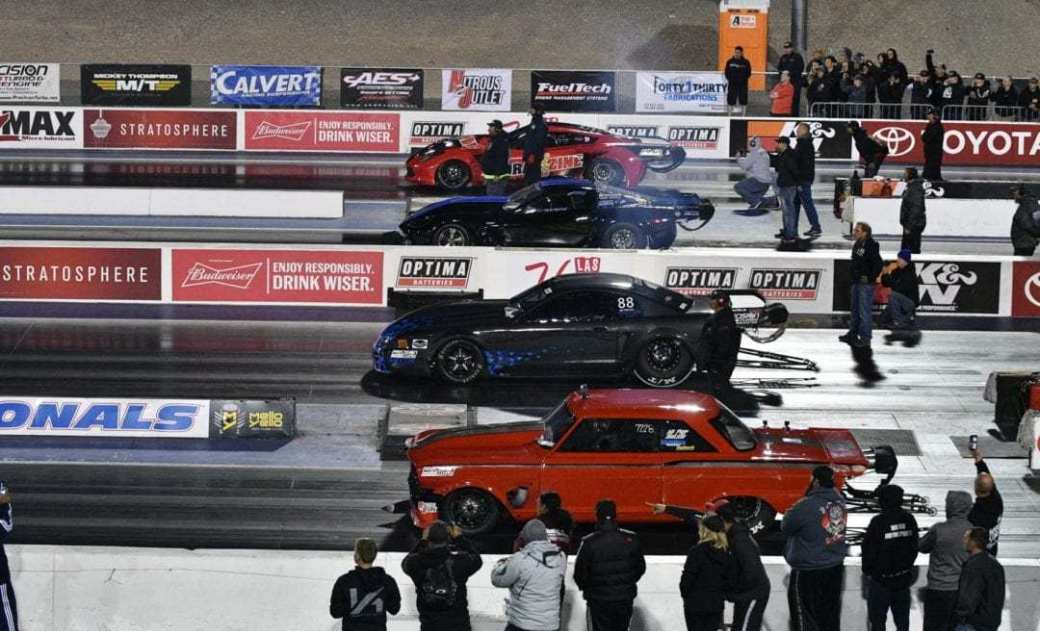 The COMP Cams Street Car Super Nationals 15 Presented by FuelTech is a four-day marathon with a legacy of record-shattering runs, dominating performances by the greatest in the world, and stunning upsets. This year, in addition to the inclusion of Radial vs. The World class, the SCSN 4-Wide exhibition returns after a wildly-successful run during the 2018 event.

The bucket-list race is Nov. 21-24 at The Strip at Las Vegas Motor Speedway, with the drag racing world awaiting the return of the 4-Wide(ish) SCSN. The plan, developed by SCSN Promoter and Premier Street Car Association President Mel Roth, creates one pair of lanes for Radial Tire classes and the other for Slick Tire classes. The event was one of the most memorable of last year’s race here, with both the drivers involved and those watching demanding it be brought back for a second year. Last November, the 14th edition of the Street Car Super Nationals utilized all four lanes of the facility’s unique layout in order to provide an all-new experience that also expedited the racing from class to class.

The plan, spearheaded by SCSN Promoter Mel Roth and Director of Racing Operations for The Strip Jeff Foster, calls for standard slick tire classes to be run on the west track with radial tire classes on the east track. The lanes will be used in an alternating format, eliminating the need to slow the program in order to prep for the upcoming class. In addition, prep specialist Kurt Johnson returns to assist again this year.

“This makes a huge difference when it comes to down time on the race track," Roth said. "Now, instead of waiting for more racing while track prep is going on, we can prep the track and not interrupt the action.

"Plus, we're introducing 4-Wide Friday, where selected racers can utilize the unique quality of this track for some Pro Mod and big-tire cars against the radials for some old-fashioned grudge racing!"

New this season is the wildly-popular Radial vs. The World class presented by Car-O-Liner and M&M Transmission. Add this to the 16 classes, including Pro Mod and Outlaw 10.5, five Radial Tire classes, three No-Time Grudge classes, and six Bracket classes and you have the blueprints for another incredible weekend of drag racing. Throw in a huge vendor’s midway and swap meet and the fact you’re in Las Vegas the weekend before Thanksgiving, it’s a destination weekend for the entire family!