Mon, 2006-10-16 13:06
NHRA POWERade Series driver Melanie Troxel, who has advanced to a Top Fuel-best eight final rounds this season, has been honored by Billie Jean King’s Women’s Sports Foundation as its “Sportswoman of the Year,” it was announced today.

Past Sportswoman of the Year Award winners include a who’s who of the greatest female athletes of all-time, from Annika Sorenstam and Juli Inkster to Sarah Hughes and Michelle Kwan to Martina Navratilova and Chris Evert.

Troxel, who drives the Skull Shine/Knoll Gas-Torco Racing Fuels dragster for Don Schumacher Racing, is the first auto racer to win the award. 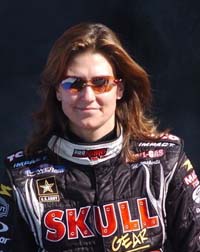 NHRA POWERade Series driver Melanie Troxel, who
has advanced to a Top Fuel-best eight final rounds this season, has been
honored by Billie Jean King's Women's Sports Foundation as its "Sportswoman of the Year," it was announced today. Past Sportswoman of the Year Award winners include a who's who of the greatest female athletes of all-time, from Annika Sorenstam and Juli Inkster to Sarah Hughes and Michelle Kwan to Martina Navratilova and Chris Evert.

Troxel is the first auto racer to win the award.

"For more than a quarter century, women have not only been competing, but
winning, at the highest levels of NHRA POWERade Series drag racing," NHRA President Tom Compton said. "This honor serves to validate that performance and it further strengthens NHRA's leadership position as it relates to women in motorsports."

"It's really an honor for me to be named the Sportswoman of the Year
against a field of such high achievers in a variety of sports," said Troxel,
who was earlier this year recognized for her breakout season with ESPY
nominations for Best Driver and Best Female Athlete. "To be the first
race-car driver to win this award, to be recognized among these outstanding
female athletes, is personally rewarding to me. It also indicates the
continuing growth of awareness of the unique sport of drag racing with all
sports fans."

The Women's Sports Foundation, founded in 1974 by legendary tennis champion Billie Jean King, is dedicated to advancing the lives of girls and young women through sports and physical activity.

"The Women's Sports Foundation Sportswoman of the Year Award recognizes athletes who have had noteworthy or career-defining performances within the past year. Melanie Troxel's 2005-2006 season has certainly earned her this distinction," Women's Sports Foundation CEO Donna Lopiano said. "She is making a tremendous impact on the sport of drag racing and in so doing blazing a trail for countless young female athletes. If the past year is any indication, Melanie will continue to set records that both male and female athletes will dream of catching."

Earlier this year Troxel beat out NASCAR's Jimmie Johnson and IRL's Helio
Castroneves to win the prestigious Driver of the Year first-quarter award,
which is voted on by a distinguished panel of auto racing journalists. It is
the first time in the 40-year history of the Driver of the Year award that a
woman has won the quarterly or year-end vote. And in July she received the
USAC Kara Hendrick Spirit Award.

Troxel, 33, set an NHRA record for the most consecutive final round
appearances (five) to open a season in Top Fuel. The quickest (4.458
seconds) and fastest (331.04 mph) female racer in NHRA history, she is
trying to join legendary Shirley Muldowney as the only women in NHRA history
to win a Top Fuel world championship title. Muldowney earned three during
her driving career, the last coming in 1982.

Troxel led the NHRA POWERade Series standings through the first 12 events of the 23-event
season and is currently in fourth place. She sits 172 points off the pace set by Doug Kalitta
with two events remaining.

* Named the first quarter Driver of the Year by a distinguished panel of auto racing journalists, beating out NASCAR’s Jimmie Johnson and IRL’s Helio Castroneves.

* She is the first woman to be selected as a quarterly winner for the prestigious Driver of the Year in the 40-year history of the award
* Set NHRA record for most final rounds to open a season (five)
* Has advanced to a Top-Ful best eight final rounds in 20 starts
* Has earned two victories: CARQUEST Winternationals at Pomona, Calif. and SummitRacing.com Nationals, Las Vegas

* She has earned two No. 1 qualifying positions: O’Reilly Thunder Valley Nationals at Bristol, Tenn. and the O’Reilly Summer Nationals at Topeka, Kan.

* She is seeking to become the first female in Top Fuel to win a POWERade Series world championship in a quarter century (Shirley Muldowney, 1982).


Melanie Troxel, Career Highlights:
* Named the NHRA Auto Club Road to the Future Award winner in 2000, which recognizes a young driver with a promising future in the sport

* Became one of 39 women to win an NHRA national event in any category (including sportsman) when she won two Top Alcohol Dragster races in 1999 (Seattle and Topeka)
* In her professional career she has two victories and seven runner-up finishes
* Entering the 2006 season, she had earned Top Fuel runner-up finishes at Dallas in 2000 and Pomona, Calif. in 2005

* She is married to Tommy Johnson Jr., who drives a Funny Car in NHRA POWERade Series competition

* She is the daughter of the late Mike Troxel, a former NHRA Top Alcohol Dragster competitor in the 1980s

Past Sportswoman of the Year Award winners*:

1982 – Martina Navratilova, Mary Decker
1981 – Chris Evert, Tracy Caulkins
1980 – Tracy Austin, Mary Decker
*NOTE: Up to 1993, Awards were given to Amateur and Professionals; beginning in 1994, the Foundation awarded one award to the top individual and one to the top team.