Larry Carrier couldn’t wait to kick off the 1974 IHRA season in Charlotte, N.C. 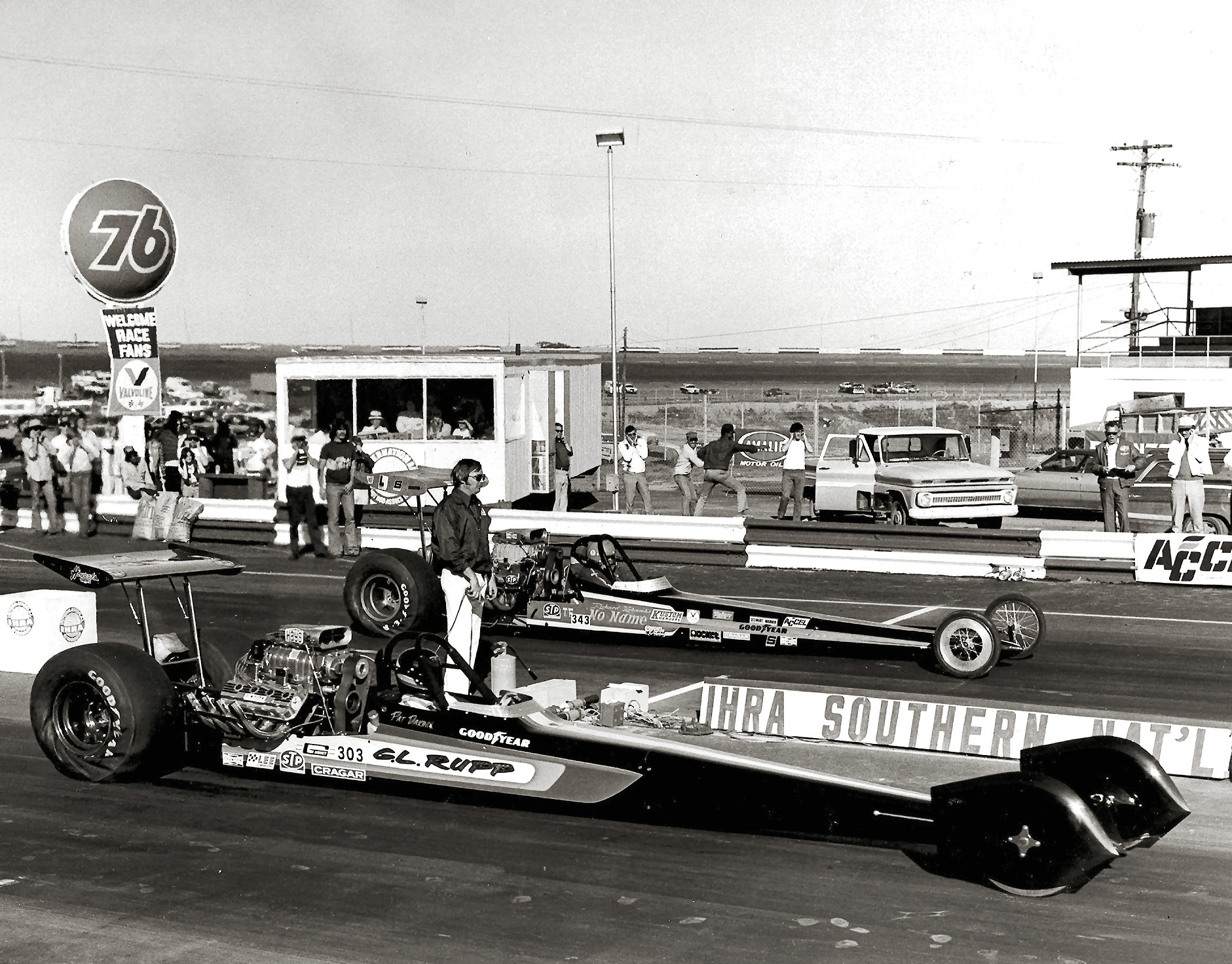 Three days later, the IHRA founder and president couldn’t get out of town quick enough.

The only national event drag race staged on the hallowed grounds of what is now Lowe’s Motor Speedway featured plenty of entertaining and competitive drag races, but in the end a single-car crash accounting for three deaths cast a pall on the event. It was more than many could endure, especially Carrier.

So what inspired a race at what is now one of the most famous oval track racing facilities in the world?

Carrier understood the value in cross-promoting drag racing with stock car racing long before the rest of drag racing caught on to the idea.

The pioneering leader of the fledgling International Hot Rod Association knew the NASCAR markets; after all he was one of them. 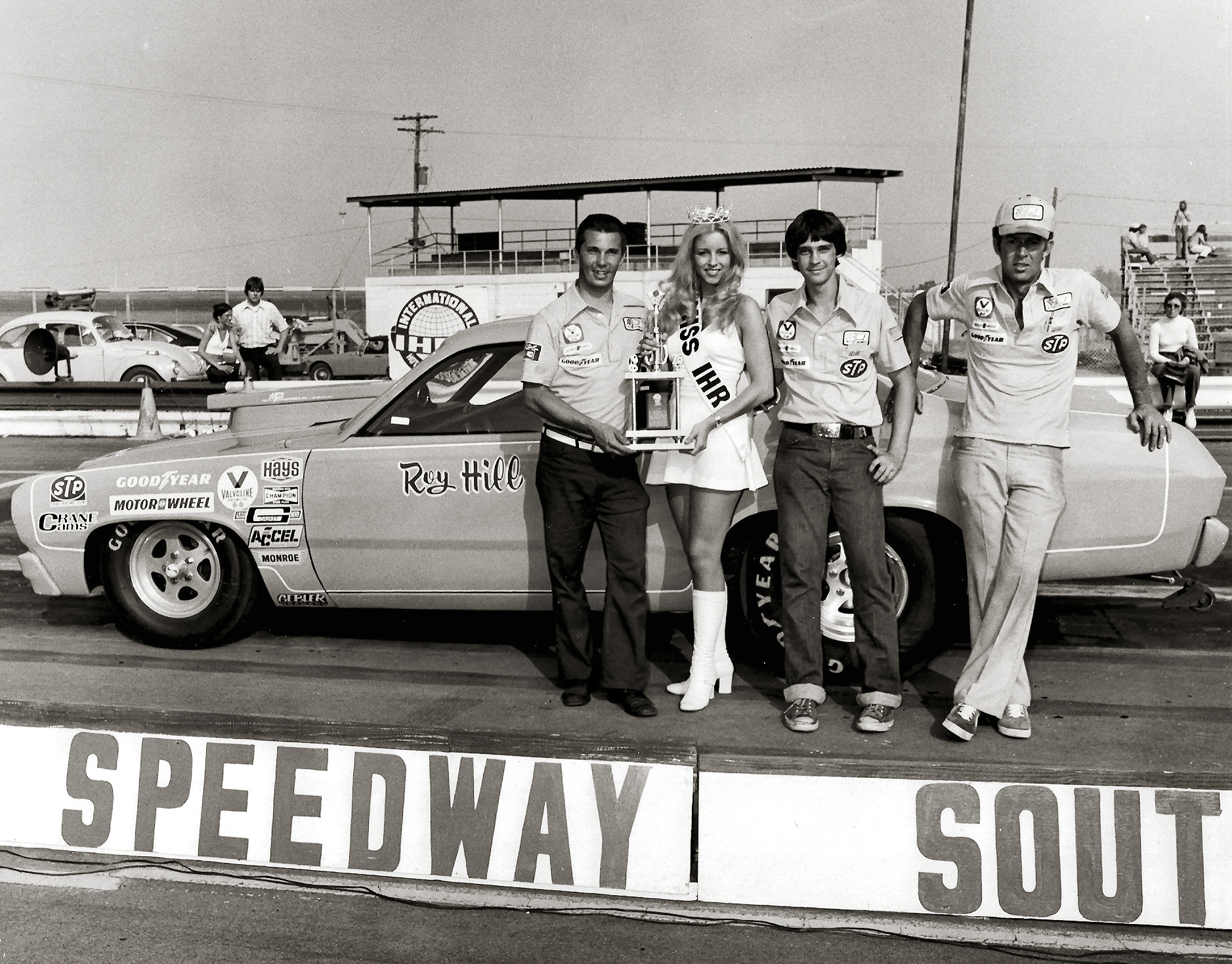 Roy Hill's experience at Charlotte Motor Speedway was a natural considering his car was largely supported by Petty Enterprises. He finished runner-up to the team of Wayne Gapp & Jack Roush.

Carrier had built Bristol Speedway and while the roundy-round facility struggled at times, the drag strip thrived.

He combined with L.G. Dewitt to build a drag strip across the street from the North Carolina Motor Speedway in Rockingham, N.C.

Bristol and Rockingham were both anchors for the NASCAR scene, but one venue was missing – Charlotte.

Carrier didn’t flinch at the potential to innovate drag racing with an eighth-mile national event, although to the drag racing purists, this shortened distance was pure blasphemy.

Ted Jones officially joined the IHRA in a management capacity in 1975; however, in 1974 he was in the transition phase as a part-timer.

“He knew Humpy Wheeler and Larry knew all the NASCAR track operators because he was one of them,” Jones recalled. “Larry was one of the original guys who built a track for NASCAR. He did that before it was cool. He couldn’t even come close to filling Bristol Speedway.” 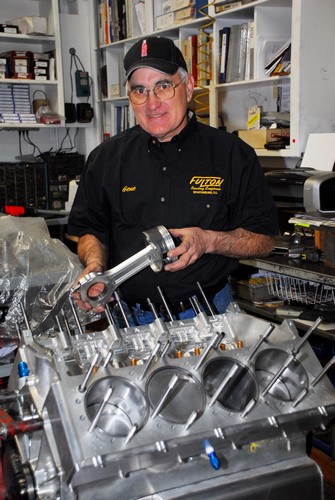 Gene Fulton is long removed from his driving days, but he remembers the day he got to race on pit road.

“It was quite a different experience because you had a shut and return area that was banked,” Schumacher recalled. “It was pretty fun to compete at.

“I wondered if the car was going to tip over, I learned just how much banking there is on a NASCAR track.”

Gene Fulton, a former five-time champion in IHRA sportsman drag racing, raced in the Modified division with an old Modified Production 1964 Chevy II wagon. He felt the experience of racing, even as a sportsman competitor provided memories he’ll always remember.

“It was cool as hell.” Fulton recalled. “There were a quite a few spectators there. The stands were kind of full, but the pits – they were jam-packed. You could hardly move around.”

“They used that stretch between turns three and four to stage the cars,” Fulton recalled, with a laugh. “The cars were sitting at so much at an angle that they were sideways, and we wondered if they were going to fall over. They were lined all the way around the track.”

Jones recalled the competition was very strong with the nitro cars dipping into the three second zone. The track prep on pit road was minimal, as was the nature of the process during that era.

Instead of heaping on large amounts of traction compound, more of the gold dust rosin was worked into the starting line. The track prep was just a small measure of the out of the ordinary adjustments made for the racing surface.

“Not as much VHT on the track,” Jones said. “We had a portable tree and the whole set-up was pretty tricky. They had to run the wires overhead. They had to do that with everything.”

“It was in the early days and not one of the more glorious things. It was a race and in those days, Larry was doing his best to grow the sanctioning body.”

The nitro cars lit up the place.

“The fans loved the nitro cars and it wasn’t that far from Rockingham,” Jones added. 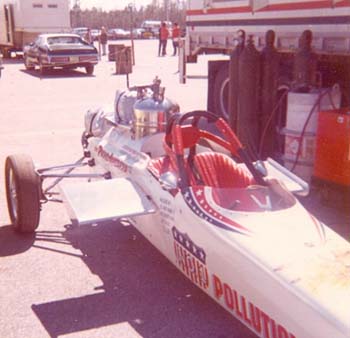 Here's a glimpse of the Pollution Packer rocket car that Dave Anderson drove and inevitably lost his life in.

Nitro cars and more than three dozen Pro Stock cars were more than enough to keep the Saturday crowd excited.

Carrier was a promoter and that nature always ensured he’d have between-rounds exhibition to keep the spectators entertained.

Then, in 3.42 seconds, Carrier’s vision went from good to horrible.

Carrier had booked in the Pollution Packer hydrogen peroxide-fuel rocket driven by Dave Anderson. Rocket cars were common exhibition vehicles but only in quarter-mile applications.

The rocket car would prove to be the only negative aspect of the eighth-mile competition.

The stories have varied throughout the years regarding the cause of the crash. Unofficially race officials from the era testified the team over-fueled the car, while other accounts blame a parachute failure, brake malfunction and possibly a chassis failure.

The rocket cars had no fuel shut-off and essentially a driver was along for the ride. For Anderson, the ride was a wild one.

The parachute deployed but failed to open, trailing the rocket as it careened through the short shutdown area. The dragster went into a spin and struck down two crewmen on a dragster parked in the area before they could get out of the way.

The car collided with several wreckers parked in the shutdown area and broke in half when it struck the six-foot wall that shielded the main grandstand from the race track.

Both crewmen reportedly died upon impact and Anderson, according to newspaper reports, died en route to the hospital.

Less than a year earlier, Anderson had become the first to break the five second mark on a quarter-mile track, at 4.99 seconds, and a top speed at the finish line of 322 mph.

Fulton witnessed the deadly scenario from his spot in the staging lanes.

“It cast a pall on the event, but they went ahead and finished,” Fulton said. “I remember he hit the rail and jammed into the wall. I was on the other side of the track and looked at the guys beside me and knew he’d run too long. There was a lot of dust. We knew something bad happened.”

Jones admitted from that point, the drag race quickly became a non-issue.

“The accident will always overshadow any positive the event produced,” Jones said. “The race wasn’t bad aside from that very unfortunate incident.”

“The race was somber from that point,” said Satch Gregg, then a racer and later an IHRA official. “You realized how dangerous the sport can be.”

The incident was enough to convince Carrier that his first race at Charlotte Motor Speedway would be his last.

“Larry made the decision not to come back,” Jones said. “The death really made a big difference and he and the speedway people decided not to stage the event again. I think at this point Larry decided to stick to strips.”