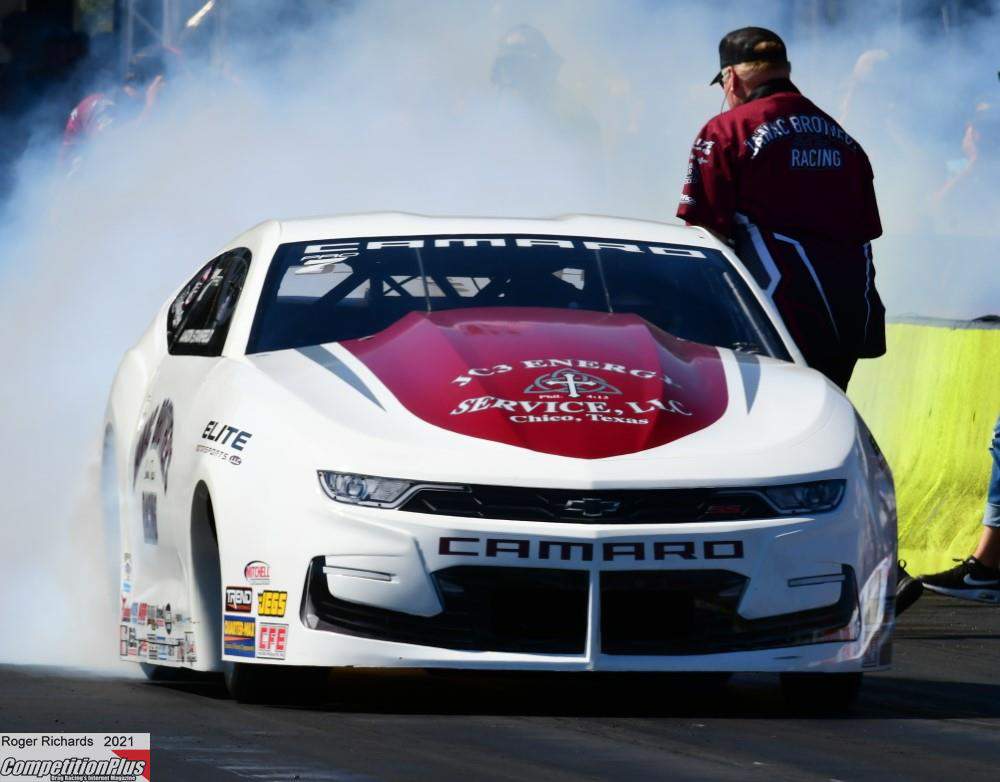 Aaron Stanfield is 26 years old, but he said, “People ask me if I have a driver’s license.”

Evidently no one who asks him that ever has been to a drag race. If they had, they’d know he understands exactly what to do behind a steering wheel.

But Stanfield is doing more than chasing four-time champion Anderson in pursuit of his own first Pro Stock title. He’s helping change the face of the class as part of a wave of younger drivers eager to forge their own achievements like Anderson – and, shamelessly, at Anderson’s expense.

Stanfield, whose dad Greg Stanfield and grandfather Howard Stanfield raced before him, made his professional debut in 2014 at age 19. And though he has ushered in a wave of younger Pro Stock drivers who have turned around the conversation about the class, along with 2018 champion Tanner Gray and fellow FSS champ Drew Skillman, Stanfield is more of a veteran than some of the new generation.

But Stanfield and his contemporaries are revitalizing a class that as late as two or three years ago teetered on the brink of collapse. Anderson affirmed that today, Pro Stock is healthy and growing, saying, “We all say we need young blood in the class, and we absolutely have it. It used to be all old people like me, and now I'm probably one of one or two guys that are older. So the class switched, and that’s what it has to do to continue.”

Stanfield said, “I think that is really good. And you can walk through the Pro Stock pits and you wouldn’t hear one person say a bad thing about that.”

The expectations that puts on him don’t faze him. “I think it’s a good thing,” Stanfield said. “The only way the NHRA or drag racing, period, continues to grow is you have to have youth. You have to have new people. Greg Anderson’s still bad to the bone, but he won’t be able to drive a Pro Stock car forever. So that knowledge has to be passed down. The torch has to be handed off at some point. And I think it’s great that we’re seeing some youth in Pro Stock. And I’m happy and excited to be a part of it.”

He said, “Pro Stock’s in a good place but way different than it has been in the past. It’s in a really good state, as far as availability of it, and we have a lot of youth in it. I think it’s important for the health of our sport. I would probably say that as far as new blood and youth, Pro Stock is the best right now. I think it is more affordable than it was when my dad raced. With the RPM limits and certain things they’ve done, it’s definitely made things more affordable.”

Stanfield cautioned that “it’s not as simple as just picking up the phone and calling someone and saying, ‘Hey, I want to drive a Pro Stock car.’ But the availability of going to these big-name teams and being able to compete at a high level very quickly. And a lot of it can be based on you. I guess you could say it microwaves you. If you look at Greg Anderson, Erica Enders, you go look at their starts – or my dad – they didn’t start out with what a lot of the younger guys that are in it right now have the opportunity to start out with. It has taken them a long time to get to that top level of performance.”

He clarified that he isn’t saying this new crop of Pro Stock drivers is entitled.

“I would say Dallas and myself, we both put in a lot of time in drag-racing, period, to be able to put ourselves in a good position and get around the right people to help us chase our dreams,” Stanfield said. “But at the end of the day, I didn’t start a Pro Stock program and end up where we’re at. I mean, we’ve gotten around the right people. The Elite team has done a great job with putting me in a good position to do well.”

For Stanfield, the key word is work. That’s what makes Stanfield a bit of a throwback who might have been completely comfortable in the heydays of Bob Glidden, Warren Johnson, and the drag-racing pioneers who built, serviced, and raced their own cars.

“It is hard work. I always said since I’ve started that I’ve eaten it, I’ve slept it, and I’ve breathed it. And I’ve been very fortunate to be around some really good people that have helped put me in good places,” he said.

Along the way, Aaron Stanfield had to juggle his racing career with business classes at Louisiana State University-Shreveport. He said, “College was a challenge, because opportunities were starting to pop up in the drag-racing world, so I had to learn how to juggle being able to go to school and start to build a career for myself at the same time. It was something that was very important for me, and I did well. I was taught to take a lot of pride in anything I ever do.”

He said his dad, Greg, who reached the semifinal round Saturday in Super Stock competition, “built the name for himself, and he started me with a great foundation to continue to build. What he has accomplished, in my eyes, is he’s one of the greats of drag racing, in the sense of Pro Stock and sportsman racing and engine building, as well. My goal isn’t to fill his shoes. It’s kind of to build my own path.”

At the shop back home at Bossier City, La., the Stanfields focus primarily on the four Factory Stock Showdown cars they prep: the ones for Aaron Stanfield, Stephen Bell, Arthur Kohn, and David Janac.

“It’s mostly all NHRA stuff. Just about any class, we’ve worked on engines. We have a lot of different customers throughout the sportsman ranks. We’ve had four cars on the Factory Stock Showdown this year that we basically call our house cars.”

In FSS, Stanfield drives a COPO Camaro for the Janac Brothers, “but it’s all our stuff. From top to bottom, it’s our package: engine, chassis, tuning, everything. The Pro Stock stuff, Elite does the engines. We don’t do anything to do with the engines on the Pro Stock side.”

Stanfield said the gang at the shop is a small but hard-working contingent.

“It’s myself, my dad, my uncle [Mike Stanfield], and Collin Jackson and Conner Statler, who are both SAM Tech graduates,” he said. “My uncle and my dad are the ones we lean on inexperience and knowledge. My dad and uncle work very hard, but a lot of the hands-on work being done is done by the young guys: myself, Conner, and Collin – with leaning on my dad’s experience. He lets us learn. He teaches us. Of course, learning’s always a challenge. It’s a lot of hours to be at the top of our game. We all eat, sleep, and breathe it. We practically live together. We spend a lot of time at the shop, working, and on the road, racing. They both work with Arthur Kohn, who races Showdown with us.

“I personally saw myself in them in many ways,” Stanfield said of Jackson and Statler. “You know, it’s something I don’t see often: young guys as interested as I am in the sport. It was something I wanted to have around me. They both come to work for us at the shop, and it has been really fun. They’re a blessing to us. They work in the engine shop. They’re very heavily involved in the engine shop, and they’re very involved at the racetrack. Connor takes care of my car and David Janac’s car, as far as servicing between runs. Anytime we make decisions, we try to make them as a team. They’re both extremely involved in all parts of our program. It’s just learning and always trying to get better. In the grand scheme if things, it’s been around for a few years, but it’s still a new class. So it’s ever-changing, and you’re always trying to get better. It’s been challenging, for sure. And we also do a lot of engine customers, as well.”

“It’s always a step to hop in a brand-new class, no doubt. But it’s something that we think is really important to drag racing. It’s just the fact of having the manufacturers compete against each other is something that we want to be involved in and be part of the evolution of it,” Aaron Stanfield said.

“Both classes obviously are very expensive. Pro Stock has been refined for a really long time. Even though it changed to EFI, it’s still 500-inch, naturally aspirated engine that’s been refined for a long time. So being that the Showdown class is new, there’s just a lot of development that goes along with it.”

He said, “I definitely would say I take a lot of pride in how the car runs. That definitely means a lot to me. That’s part of the reason I enjoy so much this class. It’s something we’ve all worked really hard to do well in. It’s a lot of fun. That’s one of the reasons we enjoy it so much.”

Aaron Stanfield’s 2020 achievements alone included earning the Factory Stock Showdown (FSS) championship in his Chevrolet COPO Camaro by winning five of the series’ six races (including the renowned U.S. Nationals, which his dad won in 2010 in Pro Stock). He won three trophies in one day at Houston, claiming his first Pro Stock victory with Elite Motorsports, winning the FSS race, and secured his first title. On top of that, he took the Lucas Oil Drag Racing Series Division 4 Top Dragster championship.

This season, Aaron Stanfield entered the Countdown with three Pro Stock victories (at Epping, N.H., and Sonoma and Pomona in California) in four finals. And at St. Louis in September, he clinched a repeat of his FSS championship. He continued to dominate his Division 4 Top Dragster standings.

For all his “driver of the future” sort of label, Stanfield hasn’t thown a whole lot of his attention into EVs, which earned a class in the NHRA’s Summit E.T. Series starting next year.

“I think it’ll take a while for that to take in drag racing. Everybody that’s in drag racing right now probably isn’t 100 percent on board with it. If that’s where the manufacturers are going, it might be something that’s way off in the future, that people might take a little more interest in. I’m an engine guy, not necessarily into the electric stuff, personally. But I think the innovation of everything is really cool. But we aren’t personally involved in any of the eCOPO stuff.”

“I think that is really good for the sport, personally,” Stanfield said.