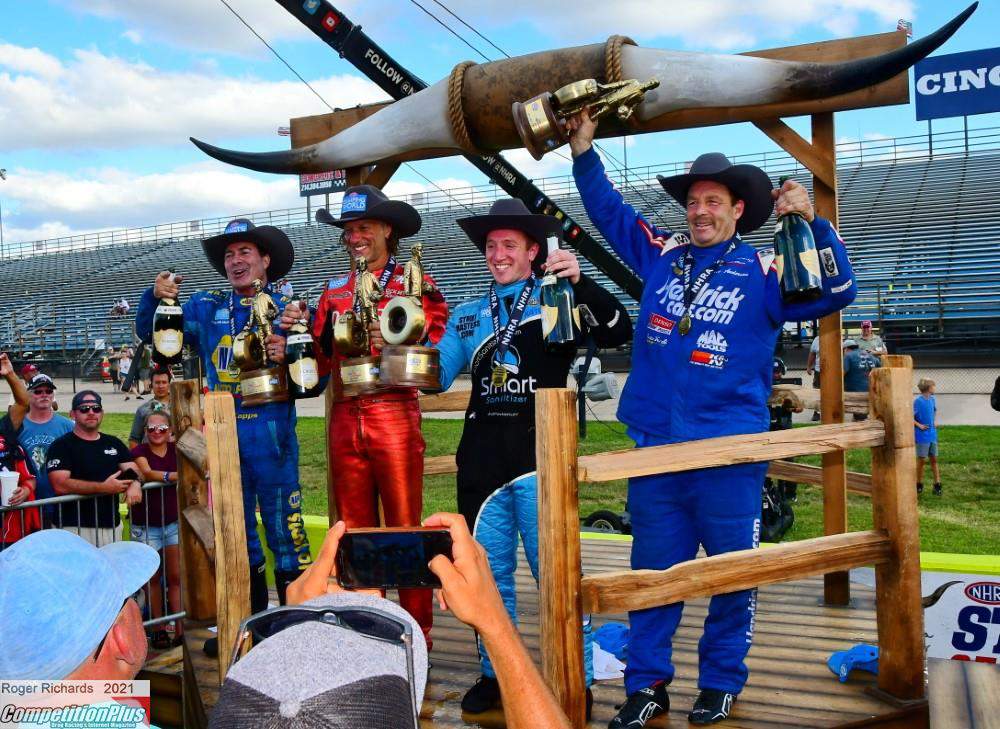 Greg Anderson made history on Sunday at Texas Motorplex, picking up his 98th career win to become the all-time wins leader in Pro Stock history at the 36th annual Texas NHRA FallNationals. 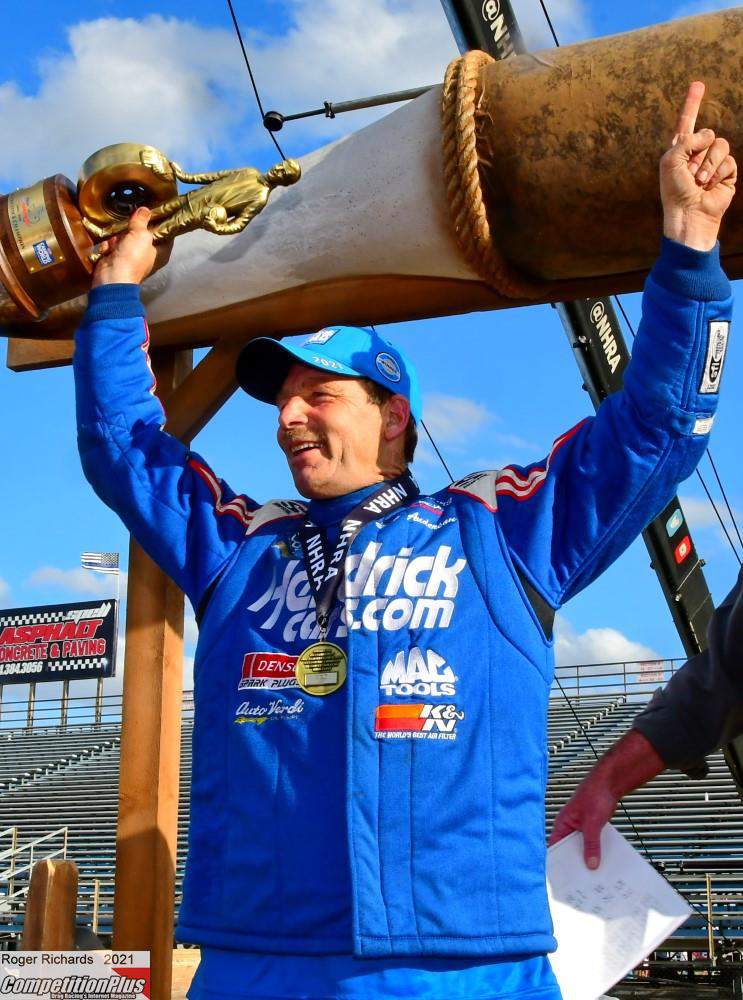 Justin Ashley (Top Fuel), Ron Capps (Funny Car) and Matt Smith (Pro Stock Motorcycle) also picked up wins at the 17th of 20 races during the 2021 NHRA Camping World Drag Racing Series season and the fourth race in the Countdown to the Championship playoffs.

Anderson capped off another brilliant weekend in Dallas, earning his sixth victory at Texas Motorplex when Chris McGaha went red in the Pro Stock final round. For his part, Anderson went 6.624-seconds at 206.32 mph in HendrickCars.com Chevrolet Camaro to cap off his historic day and weekend. The victory also gave him the most Pro Stock wins in Texas Motorplex history and extended his points lead in the process.

“It’s been a big build-up and I’ve had such a fantastic race car all year, it was almost impossible for it not to happen, but at the same time there’s so many great drivers that can whip you,” Anderson said. “There’s no guarantees it would happen, so I knew now was the time. I certainly expected myself to step up and get it done. I’m honored to be part of this and thank goodness we got it done.” 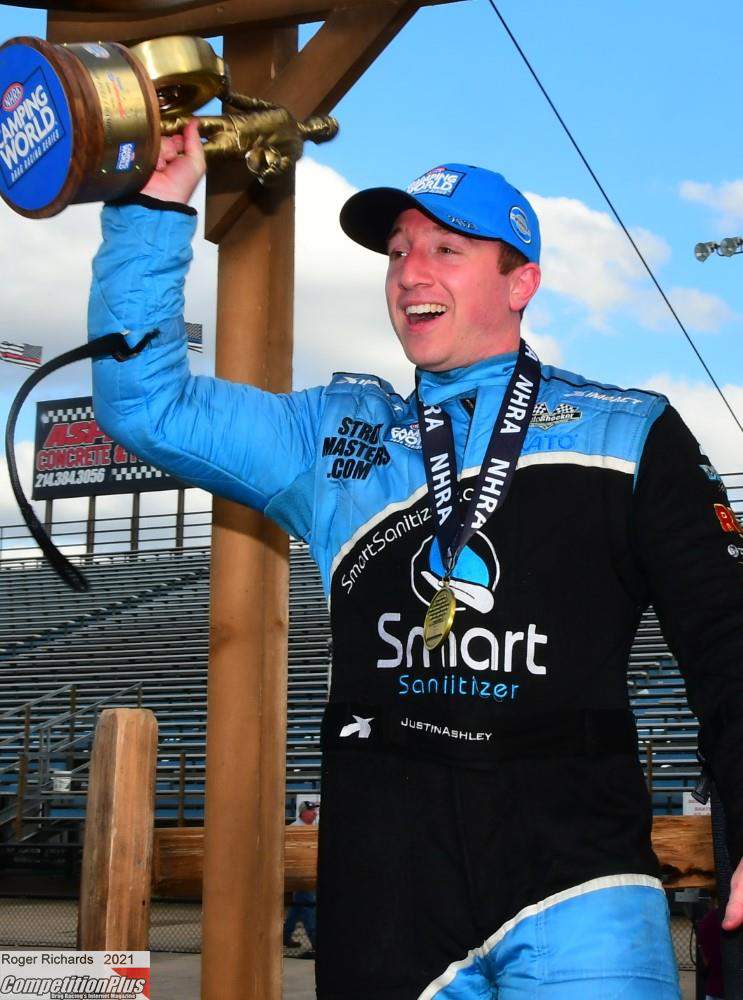 Anderson advanced to the final round with wins against Marty Robertson, Matt Hartford and Troy Coughlin Jr. and then finished job in the championship round to cap off an emotional day for the four-time world champion. He also moved 81 points ahead of defending world champ Erica Enders as he aims for a fifth world championship with two races remaining in the Pro Stock season.

“We had a great car all day. I can’t remember too many days of all these 98 wins where I had to depend on a lot of great luck, but today I did,” Anderson said. “There’s been a lot of great places where I’ve been at the last several races where it would have been great to get the 98th there, and Texas Motorplex is a magical place, and it makes sense. I’ve had a lot of victories here that have just been special and been career-changing. It’s a great place to race and it’s great for Pro Stock cars, and we made the most of it this weekend.”

McGaha reach the final round for the first time in 2021 thanks to wins against his son, Mason, rookie Dallas Glenn and Aaron Stanfield. 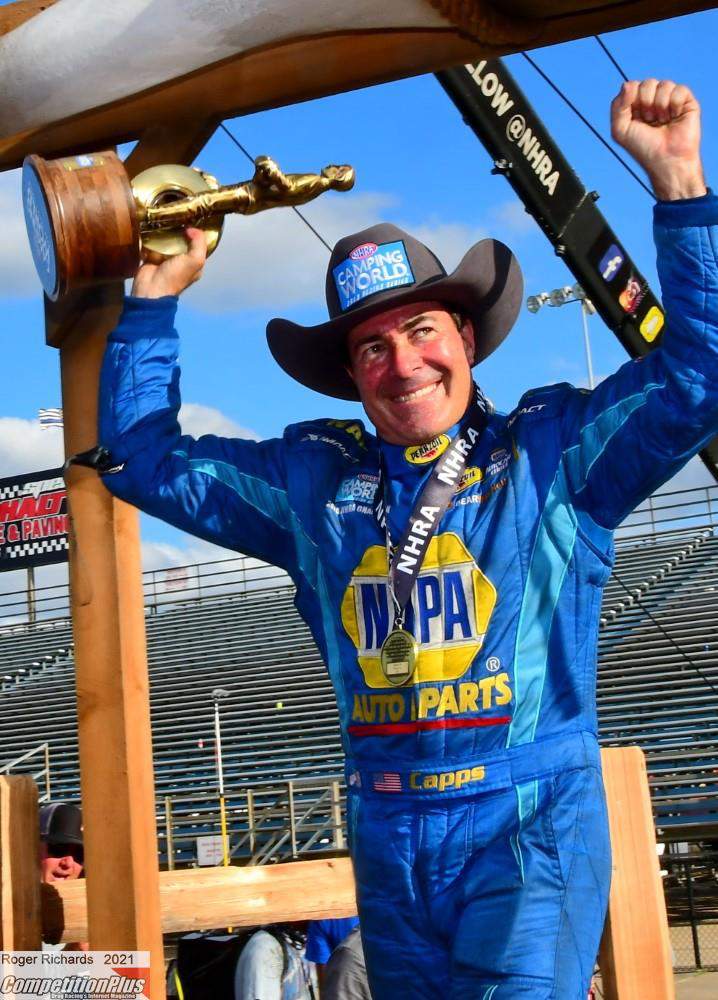 In Top Fuel, Justin Ashley beat points leader and three-time defending world champ Steve Torrence on his home turf, as Ashley went 3.759 at 326.40 in his 11,000-horsepower Smart Sanitizer dragster powered by Vita C Shot to slip past Torrence’s 3.764 at 321.81. After advancing to a pair of final rounds this season, Ashley finished the job with a clutch performance against the most dominant driver in the class. He knocked off Keith Murt, Billy Torrence and No. 1 qualifier Brittany Force to set up the marquee matchup with Torrence. Both had great identical reaction times of .035, but Ashley had just enough at the finish line to deny Torrence his 50th career win in Top Fuel.

“Racing these incredible cars gave us a real opportunity to make up some ground, so I’m real happy to collect that win,” Ashley said. “When you win a race like this, I think the key is the team. Everybody did their job and it was a complete team effort today. It felt like a bracket car and this team definitely deserves this win. For me, we had unfinished business this weekend. We were long overdue for a win and I’m glad we were able to capitalize on a final round and get the win.” 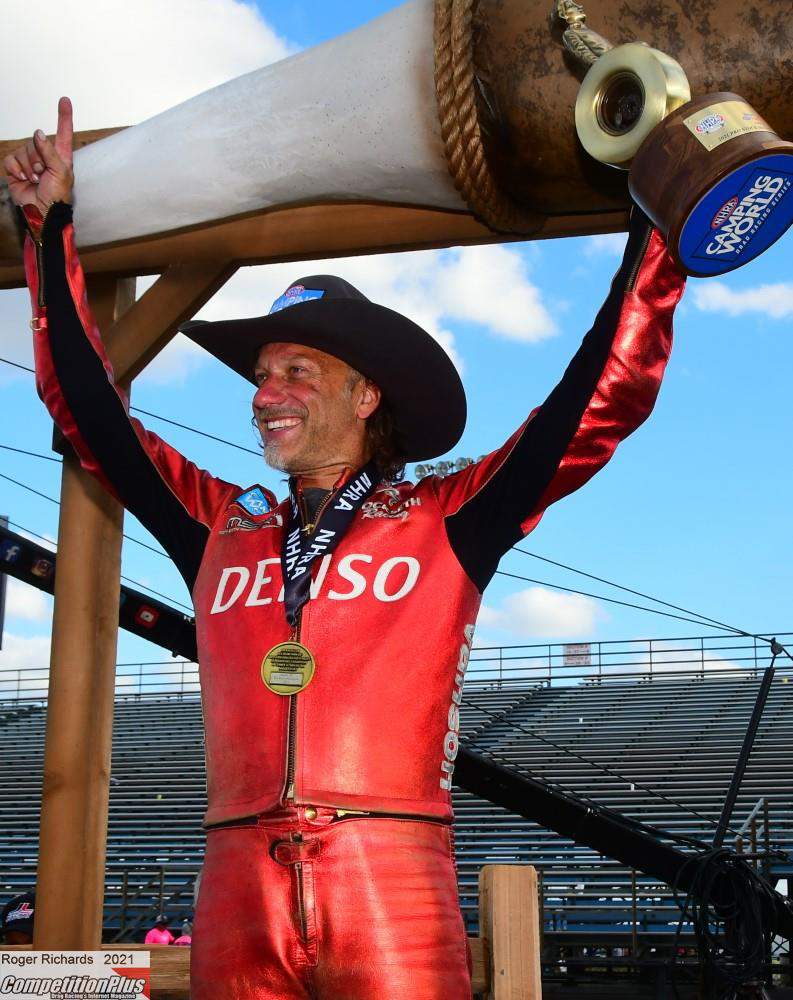 Torrence, who has nine wins in 2021, advanced to his 11th final round this year thanks to victories against Buddy Hull, Doug Kalitta and rookie Josh Hart. He did move a step closer to a fourth straight world championship, pushing his advantage to 52 points over Force with three races remaining in the season.

Capps strengthened his Funny Car championship chances with a standout performance in the final round against Don Schumacher Racing teammate Matt Hagan, picking up the holeshot victory with his run of 3.930 at 326.87 in his 11,000-horsepower NAPA Auto Parts Dodge Charger SRT Hellcat Redeye. Hagan, the defending world champ, went a quicker 3.919 at 328.78 but Capps pulled off a strong .042 reaction time to get the win and make amends for his rough outing on the starting line two weeks ago in St. Louis.

He knocked off Jack Wyatt, Paul Lee and Cruz Pedregon to reach the final round and then held off his teammate to pull within 33 points of Hagan, picking up his second win this season and 68th in his career. It’s also his first win in Dallas since 1998.

“I made a mistake that I don’t think I ever made in 26 years in St. Louis and I could’t wait to get here and try to redeem myself,” Capps said. “I’ve got such a great crew and Matt Hagan has a tough team from top to bottom. But that final round turned out great. It’s rare to beat him on a holeshot, but I was so focused. It was a lot of emotion going into that round, so I was glad to get any way I could get it. It’s never been this tough from top to bottom in Funny Car and anybody can win. It’s good to gain a little on Hagan, but it’s going to be a lot of fun and we want to finish the year strong.”

Hagan advanced to the final round for the sixth time this season and 71st time in his career thanks to round wins against Dale Creasy Jr., Bob Tasca III and J.R. Todd.

Smith moved into the points lead to finish off a dominating weekend in Pro Stock Motorcycle, beating Hector Arana Jr. in the final round. Arana left too soon on the starting line, while Smith put together a run of 6.839 at 199.08 on his Denso Auto Parts/Stockseth/Matt Smith Racing EBR. It gave Smith his first career victory at Texas Motorplex, along with his fifth victory of the season and 31st in his career. He reached the final round with wins against Michael Ray, Chris Bostick and his wife, Angie, to advance to the final round. Smith also had the quickest run in the class in each round of eliminations, moving into the points lead where he now holds an eight-point advantage over Steve Johnson with three Pro Stock Motorcycle races remaining.

“It was a great weekend for this Denso team,” said Smith, who also set the track speed record this weekend. “We were pretty flawless all weekend and we were low every round. We’ve got a pretty awesome team. Since 2005, I’ve always wanted to win this race and never got it done, and I’m just glad to get it done. We’ve had the best bike all year. Steve has definitely stepped his program up and we’re going to go head-to-head with him the rest of the year, and hopefully we can pull this out and get a fifth championship. That’s the goal and we’re going to do everything we can to try and do it.”

Arana Jr. knocked off Kelly Clontz, Jerry Savoie and Johnson to reach the final round for the first time this season and 28th time in his career.