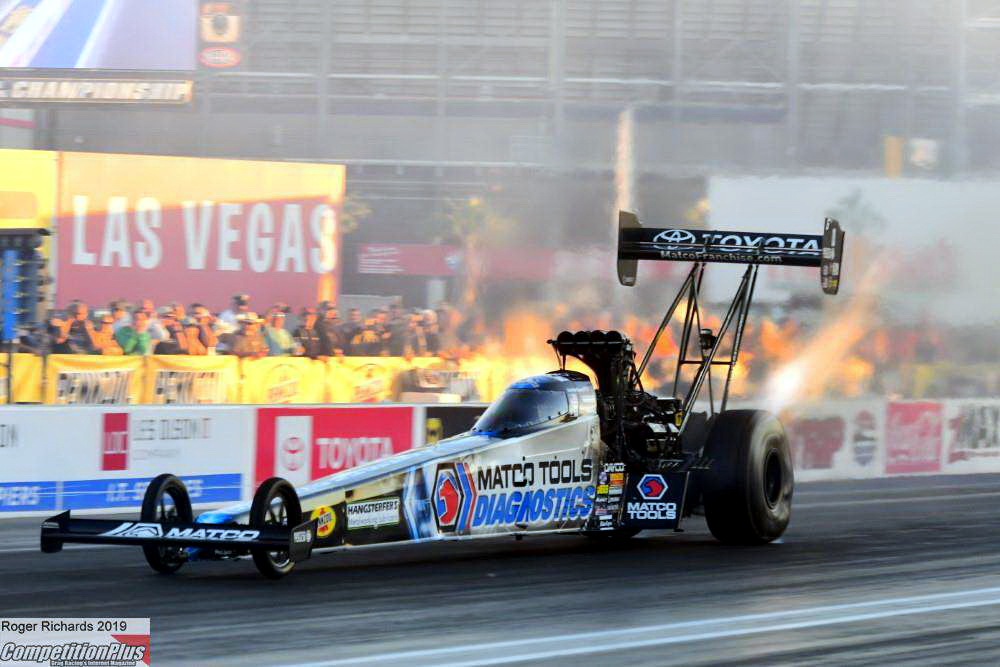 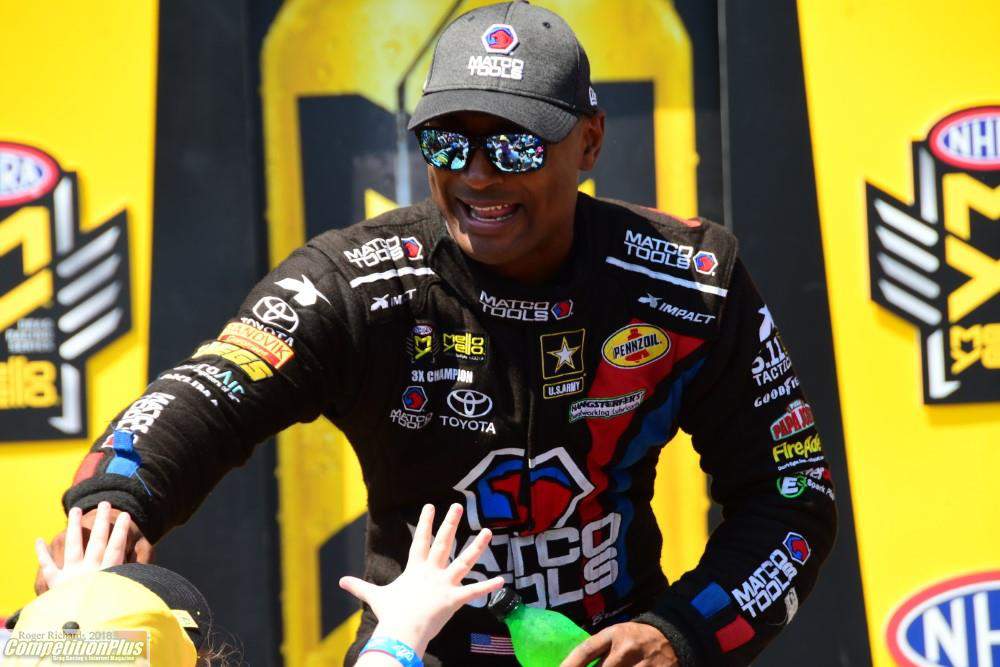 Antron Brown has been busy exhibiting the fast nature of drag racing to mainstream America.

Brown is featured in the Toyota RAV4 Hybrid TV “Fanatics” commercial that was filmed at Irwindale Dragstrip and has been airing in prime time during National Football League broadcasts. The ad represents a strategic initiative Toyota, designated as the Official Car of NHRA, has with NFL audiences.

“It was an incredible experience to go out there on the set and shoot,” Brown said, and for Toyota to link sports fans, drag-racing fans, and both Toyota’s flashy RAV4 and the eyeblink-quick Matco Tools Dragster. “I had a blast. It was an absolutely great experience. It was cool to interact there with people that were there and learn so much of what Toyota does on the mobility side of the automobile world.”

Brown said he has received “crazy calls and texts and on social media people are watching prime-time NFL football games and they’re calling me up and seeing the commercial that’s playing during NFL breaks. That’s pretty awesome when you take a guy like me from this NHRA Mello Yello Drag Racing world and we’re on prime-time, where people can see what we do.”

He said it was exciting for a prime-time football audience to “see our car, and they played it in real time” and for Toyota “to show on that commercial where people get the gist of what we do. 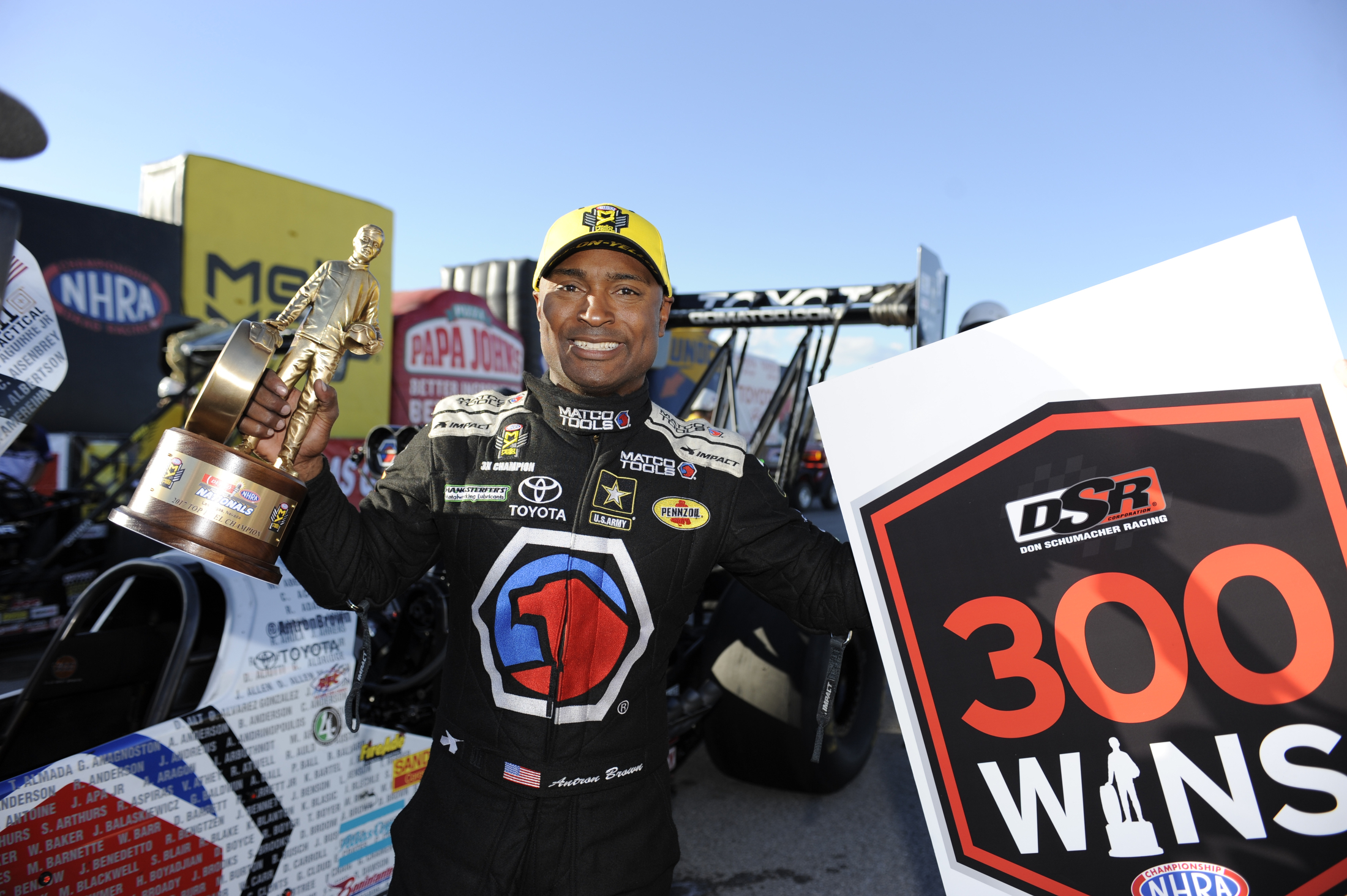 “I come out and say, ‘Cool hybrid,’ and then you see a car like mine, which is not fuel-efficient, that burns a lot of fuel [and] it’s got a lot of power. I can outrun it [the RAV4] in a quarter of a mile, but in the long term, that RAV4 hybrid will kick my butt, because it can go across the map in two tanks of gas.”

According to a Sept. 8 article by Tanya Gazdik in Media Post, the TV analytics platform Entertainment Data Oracle (EDO) “scored every ad airing during the 2019 NFL Kickoff game, then ranked them based on the incremental search activity above the baseline generated by each ad. For automotive, Toyota drove the highest share of search engagement with 47 percent. Gazdik quoted Kevin Krim, president and chief executive officer of EDO, as saying that NFL viewership “skews slightly male, in line with the male skew of new car buyers. But football is also the most popular sport for women, by a wide margin, and women are heavily involved in new-car purchase decisions. Second, overall NFL viewers tend to be lighter TV viewers than average, so this is where autos can find their audience on TV.”

She followed with a Krim comment that “the NFL provides for the ultimate live viewing experience — not only are the ratings huge, but advertisers and sponsoring brands benefit tremendously from the passion of the fan base and the huge level of engagement that viewers have with the games while watching them live.”

Gazdik wrote, “Toyota’s alignment with the NFL via key sponsorships is certainly a driver, as the brand was clearly among the top three NFL TV advertising spenders in 2018, says Steve Shannon, a veteran auto executive and EDO advisory board member."

Moreover, Brown’s Matco Tools Diagnostics livery in Las Vegas promoted the launch of the newest member of the Maximus Family, the Maximus Flash+. Brown is campaigning this scheme during the final two races of the 2019 season.

Brown said, “We’re coming out deep with the new Maximus Flash+ scheme this weekend, and this car is jazzy from top to bottom. The coolest thing about it is Matco’s new Maximus line is coming out. All of the shop owners will get to flash their cars from all of the top OEMs. They can do it out of their garage, and they have 100 percent tech support at their home base through the Maximus family.”