BECKMAN CHASING POINTS AND TROPHIES, QUICKEST ON DAY ONE AT CAROLINA NATS 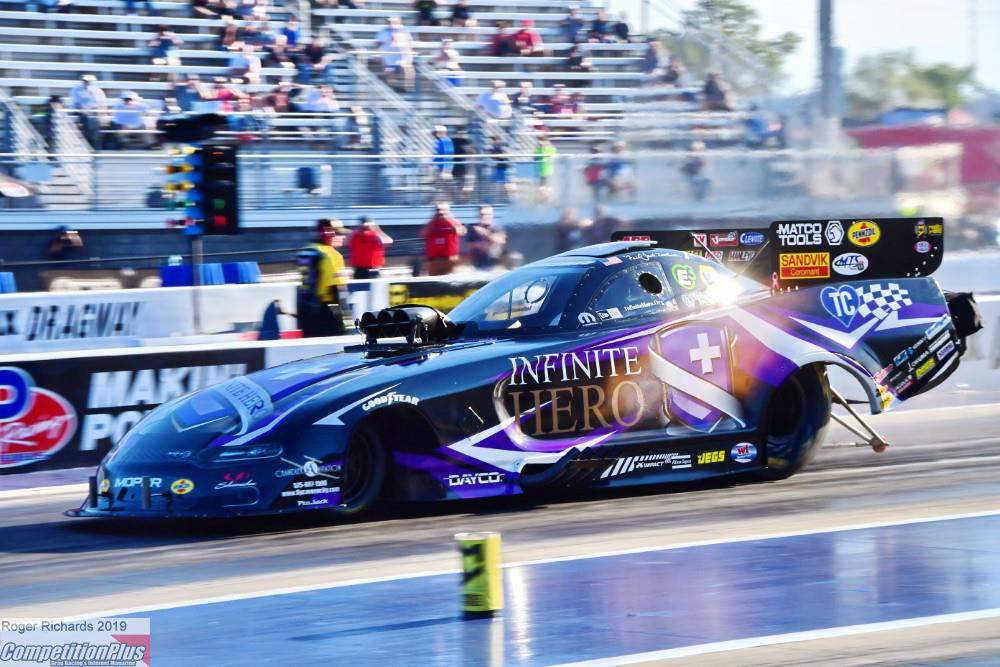 To Jack Beckman, there is nothing that compares to earning a trophy.

You can keep all of the hats. You can - for the most part - throw out the points. Heck even a national record or two doesn’t quite get Beckman’s blood pumping.

But a trophy? That is where it is at.

So when Beckman finally snapped a year-long winless streak with his first victory of the season a few weeks ago in Reading, Pa., it lifted a massive weight and released the floodgates for Beckman and his team.

And on Friday, Beckman continued to flex that muscle at the third race of the six-race Countdown to the Championship, pacing the field heading into day two at the 12th annual NTK NHRA Carolina Nationals at zMAX Dragway.

“It was the first win of the year for us and that was a big deal. To get that far and come up empty handed five times gets frustrating,” Beckman said. “You want to get that monkey off your back early in the year and establish a tempo. I always told people that I want to race for trophies the first 18 races and I’ll take six runner-ups in the Countdown, except we didn’t get any trophies the first 18 races. Getting that win at Maple Grove was huge, not only for points,but just to hold the trophy at the end of the day on Sunday.”

Beckman rebounded from a swing and a miss on his first hit at the track on Friday with a chart-topping 3.873-second pass at 334.07 mph in the Infinite Hero Dodge Charger Hellcat Funny Car in the evening session, just holding off Robert Hight. Hight tucked in just behind the Don Schumacher Racing driver with a 3.878 at 334.07 mph.

“You can keep all of the green hats. I would trade 10 green hats for one yellow hat. To me that is a crew chief award. You know what it means? I didn’t screw up the tuneup. I rode a fast horse that somebody else prepped,” Beckman said. “But now that there are those small points, the green hat means you get extra points, so it is all important. But for me, it is all about the trophies. That chunk of wood and metal means the world to me.”

Beckman entered this weekend third in the Funny Car championship standings, locked in a massive grouping of eight drivers within 100 points of the current leader. He fell from the top spot in the standings following a disappointing first round exit at the previous race in St. Louis.

“If you are going to stumble, I am sure glad we did it in St. Louis and got it out of the way. A stumble in the Countdown can spell disaster,” Beckman said. “We only found ourselves 24 points out of the lead, so what could have been devastating turned out to hopefully be a bump in the road for us.

“We have to qualify good. You’ve got to come out of the box, set your power level, and get your car to the finish line. It would be great to be in the top three to get the bonus points, but the idea is to get down the track so you can run really good in Q2 which typically is the best track conditions which seeds you for Sunday. We did that today. Now we have to try to get three points every time we roll out there.”

If Beckman’s time holds on Saturday, he will earn his second No. 1 qualifier of the year, but more importantly, important bonus points as he chases down the John Force Racing drivers in front of him.