BOUND FOR GLORY OR OBSCURITY: THE BLOODHOUND SUPERSONIC CAR 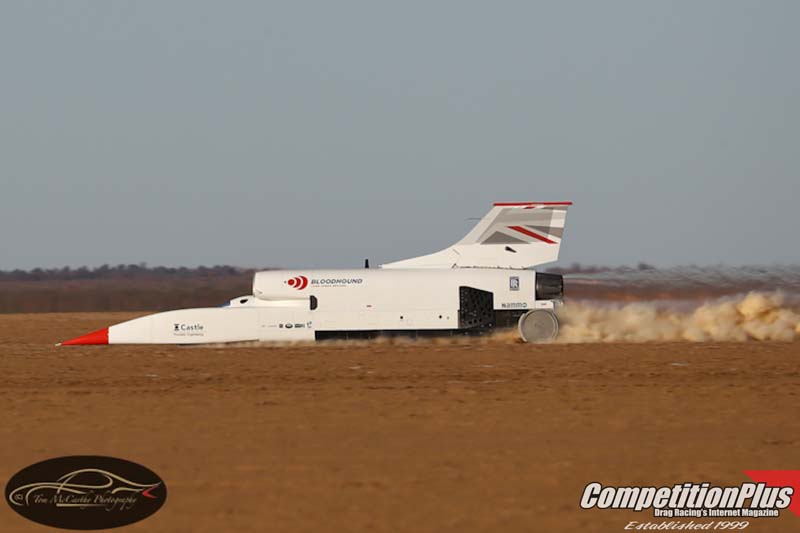 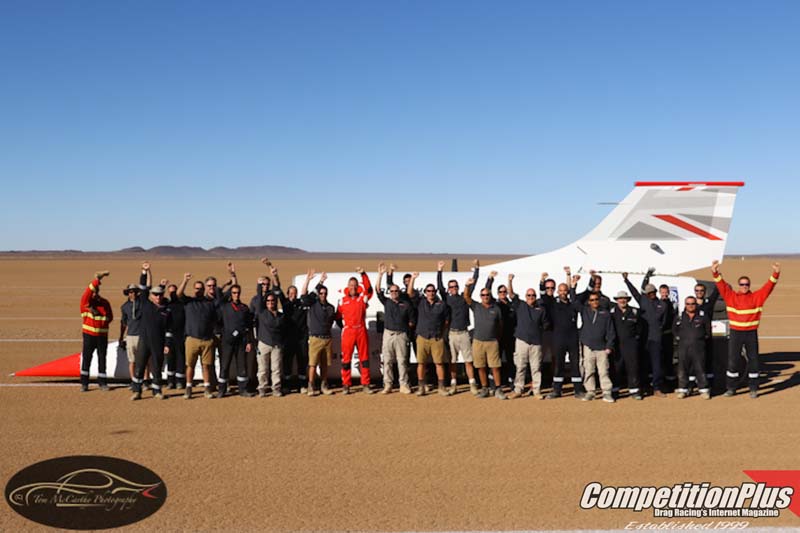 Here are some important questions for land speed racing buffs to ponder: will the world’s fastest design race car reach its potential and one day achieve its design speed of 1,000 MPH? Or will it list ungracefully to one side and capsize into obscurity? Is the Bloodhound Project to be saved yet again in the eleventh hour by someone with the guts and the financial means to go for the glory, or is Bloodhound SSC destined to end up an incomplete museum piece?

Here’s the most important question to consider of all: will someone with the financial means step forward and try to help inspire a new generation of young engineers? Or are people so self-absorbed with their financial bottom lines, social media, politics or (insert your favorite poison here) to try and inspire the youth of today who will one day shape tomorrow?

On Monday, March 2, 2020, an important press release was sent from the headquarters of the Bloodhound Project to members of the media. The focus of this communication, unless the Bloodhound SSC (Super Sonic Car) can secure the funding needed to advance the project before the end of the month, the land speed record attempt currently scheduled for 2021 will be off the table. To be blunt, this land speed racing team needs £8M (eight million pounds) in hand before March 31, 2020, or the whole project is in jeopardy.

This project has proven, repeatedly, it has tremendous potential to exceed the current world land speed record of 763 MPH, set by Andy Green and the Thrust SSC car in 1997. The same core element which headed up Thrust SSC is the primary element forming the Bloodhound team. Andy Green, who holds the world Land Speed Record, is the driver of Bloodhound. Many of the engineering staff which helped bring Richard Nobel’s Thrust SSC project to its successful conclusion in 1997, some twenty years later laid the plans for Bloodhound. And they did so with the twenty years of new technology in hand beginning in 2007.

Ten years later, in 2017, the car was first tested at Newquay Airport, in Cornwall England and achieved shake-down speeds of over 200 MPH easily. So easy in fact that on the first day of running the car with full re-heat down the airstrip, the car recorded its first full pass at 202 MPH. It then followed this up with a 210 MPH pass without shutting off and servicing the car. Bloodhound ran for 21 minutes continually, making back to back passes, without problems. This is one very unique race car.

Historically speaking, one year after its successful outing in 2017, due to financial complications, in the fall of 2018, the Bloodhound Program LTD, as it was formerly known, went into financial administration due to money problems. By December of 2018, the car was about to be cut-up and the assets sold off. Then in the 11th hour, it was rescued by a courageous man at the suggestion of one of his sons.

The business man’s son named Charlie, who loves race cars as much as his dad loves older fine cars, recommended to his father one day “Why don’t you have a look at Bloodhound?” And from out of the shadows stepped Ian Warhurst, a man with a deep and abiding love of automotive excellence, with deep pockets to match. After viewing Bloodhound in person during its demise in December of 2018, he decided to rescue the car and set it onto a new path. He really couldn’t stand to see that car and all potential go to scrap.

First, he bought the car and all necessary equipment associated with it along with the intellectual property rights. He then hired on essential staff and moved the project from Bristol Harborside, in the United Kingdom, to a new shop in Berkeley Gloucestershire for a fresh start. He then funded the project to bring it, including the 25 member contingent, to the Kalahari Desert, to test the car with a predetermined “High Speed Testing” program.

The Bloodhound 2019 HST program was a series of specific pre-profile runs, increasing in roughly 50 MPH increments, intended to generate the precise gathering of data, so experts could best assess the attributes of the car. The outing for 2019 was the first time the car was set up and run in desert trim, and at speeds, the team knew the car would generate.

Out on the 15-kilometer race course carved out of the Hakskeenpan, located in the Northern Cape of South Africa, beginning in late October of 2019, the car began with speeds of 200, 250, 300, 350 MPH etc., each time measuring rolling resistance, stopping distance after power-off, and how handling was affected by crosswinds. With weather stations set up in two-kilometer increments, they learned quickly that the car would not tolerate well, any crosswinds in excess of 10 MPH.

After five weeks of testing, on Saturday, November 16th, 2019, Bloodhound roared across the dry lakebed racecourse to a speed of 628 MPH. For those who prefer measurements in kilometers per hour, that’s a stunning 1,010 KPH. Their target speed for the HST program was to attain 600 MPH and gather all relevant data, then return to the UK shop and assess everything. The car was stripped bare to frame, the Rolls Royce EJ200 jet engine was taken out and returned to RR for a check-up, and the engineers began pouring over the data.

All involved were more than pleased to see the Computational Fluid Dynamics and the over 200 sensors on the car confirmed that over 90% of the predictions relative to expected forces and loads were either spot-on or very close under actual racing loads. This car and team have proven they can and will do what they say they can do.

To advance this project into its next phase of operation, Bloodhound needs £8M to have the Norwegian rocket development company Nammo come up with a mono-propellant rocket motor installed into Bloodhound, with its associated plumbing during 2020. Then systems tests have to be run before the car can be packed up and shipped back to South Africa to continue with the program by July of 2021.

Can Bloodhound exceed the 763 MPH mark and establish a new world land speed record mark? Well obviously if the car can go 628 mph with a single jet engine when a hydrogen peroxide rocket motor is added to the equation; this car will reach the 800 MPH mark on command. And this MUST happen before the car can be considered to go 1,000 miles-per-hour, because no one on land, on wheels, in a car, has ever gone 1,000 MPH before.

This is what makes the Bloodhound Project a land speed racing engineering marvel. The team must, in steps, advance into the unknown, beginning with speeds exceeding 763 MPH, to see how the car will behave and operate. THIS is the most important part of the Bloodhound project: meeting the engineering challenges, overcoming them, and then sharing them with other engineers and students worldwide.

Bloodhound SSC was first announced as a project undertaken by lead man Richard Noble, along with his driver Andy Green, on October 23, 2008, as an effort to break the existing record of 763 MPH which they set together in October of 1997 with Richard’s Thrust SSC car. “The Bloodhound” was conceived to not only break the existing record but go at least 800 MPH in the process, to pave the way for an outrageous mark of 1,000 MPH, as their ultimate target. Their greatest goal is not just to set a new world record for speed, but to help inspire a whole new generation of students who will gravitate into engineering fields to further STEM education in young minds that could one day benefit us all.

Many feel it would be a crying shame to see the Bloodhound car, an engineering masterpiece with proven credentials, come to an ignominious conclusion, parked in some dusty corner, of a warehouse due to lack of foresight and financial backing.

As an advertising venue, the Bloodhound team offers an international stage presence with global impact. While the South African HST program was in session, news media had a powerful presence in the Northern Cape and major news outlets like the BBC were present recording the runs. In fact, BBC produced a documentary called “Bloodhound: Chasing the Land Speed Record” that aired in December of 2019.

Ian Warhurst, a very successful businessman in his own right commented in the aforementioned media release, “Independent analysis of the media coverage of Bloodhound LSR’s successful high-speed testing program concluded sponsors would have received a 14:1 return on their investment (ROI). Conservative estimates of the coverage for an actual Land Speed Record attempt in 2021 are that it will be at least four times that of high-speed testing – and it’s likely to be higher. This means the sponsorship opportunity would give a predicted ROI of 18:1 and probably much more. For the first time, we now have a valid ROI figure that sponsors need in order to invest.

Time will tell, although there’s not a lot of it left.

Gender counts for little in the world of drag racing in Australia with a trio of women - Jacinta Woods, Annalise Cavagnino and Hayley Xiberras - making their mark in Top Fuel. #DragRacingNews #CompetitionPlusAustralia - https://t.co/GiNXlnETkm pic.twitter.com/jwHIvmqMZq