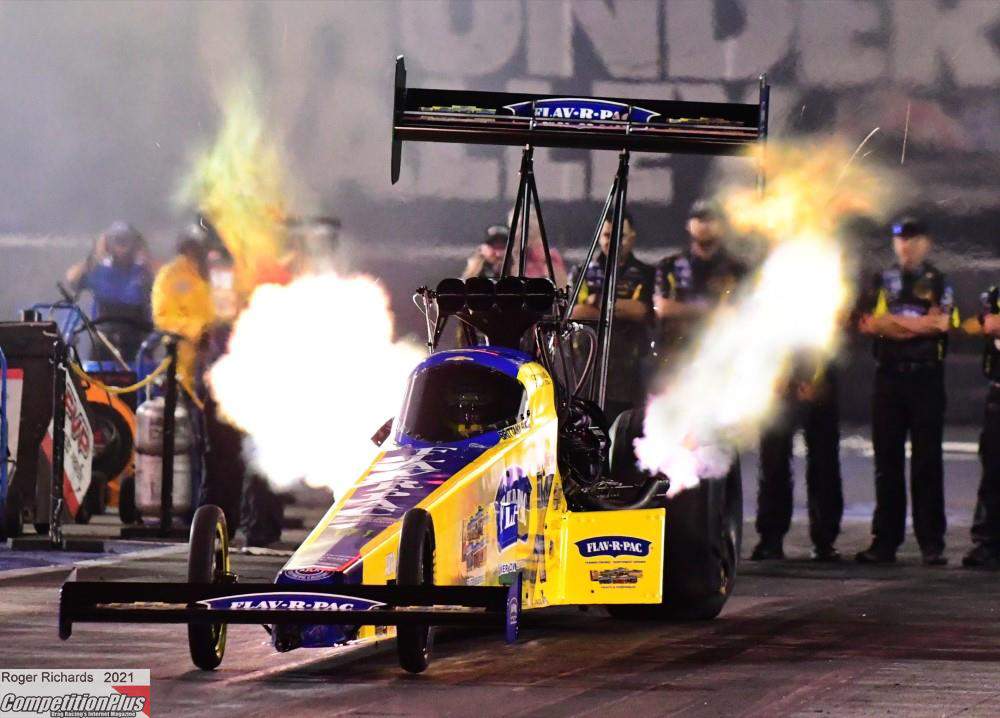 There were delays at the track due to issues with timing Friday, but Force kept a level head.

“We definitely made a few changes in that downtime, but I try to stay out of it, it gets my head in the wrong place and I start worrying about thins so I leave that to the team and (crew chiefs) David Grubnic and Mac Savage,” said Force, who has set five elapsed time and six speed track records this season. “They did a fantastic job with whatever adjustments they did make with the sun going down and the track cooling down. We made it down there. I wasn’t sure if she was going to make it; it was moving around and it felt like it was going to let go but we made it to the finish line.”

Force, who pilots the Flav-R-Pac dragster, is trying to collect her 12th No. 1 qualifying spot this season in 18 races.

Force is two No. 1 qualifiers away from equaling the Top Fuel category record of 13 in a season set by Tony Schumacher in 2006 and from tying the JFR team record of 13 set in Funny Car by John Force in 1996.

Brittany Force has been the No. 1 qualifier in 13 of her last 19 starts dating back to the 2020 season and is on an active streak of eight consecutive races in which she has posted both the quickest time and fastest speed of the meet and is also on a streak of 11 straight races in which her car has been the quickest on the property. Force’s average qualifying time for the last 12 races is 3.690 seconds and she is coming off a 3.637 second run at Dallas that was the fifth quickest in history.

Force has qualified No. 1 at Bristol Dragway once, in 2014, and she’s looking for her first win at Bristol.

Qualifying at the NHRA Thunder Valley Nationals continues Saturday with sessions at 1 p.m. and 4 p.m. (ET). Eliminations are slated for Sunday at 11:30 a.m. Television coverage continues with a second qualifying show Sunday at 1 p.m. followed by the finals at 2 p.m. ET all on FOX Sports 1 (FS1).

Force is looking to earn a second Top Fuel world championship to add to her first, which came in 2017. With three races left in the NHRA Camping World Drag Racing Series Countdown to the Championship she is currently No. 2 by just 52 points behind Steve Torrence, the reigning three-time world champ.