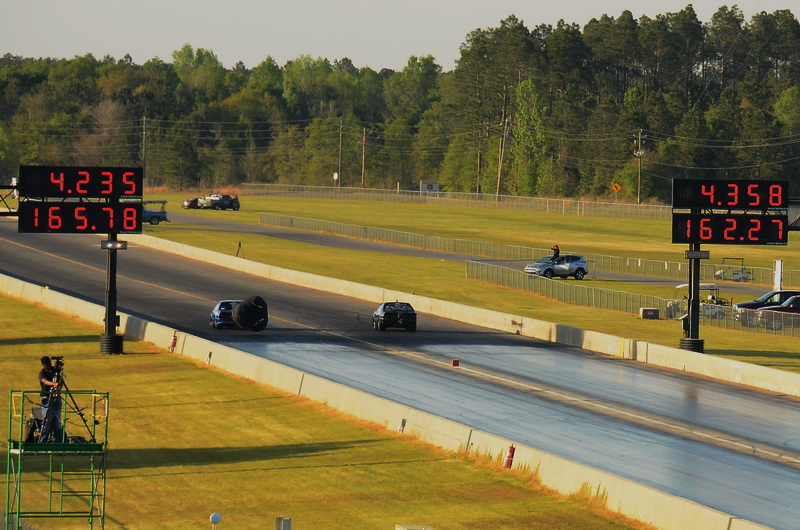 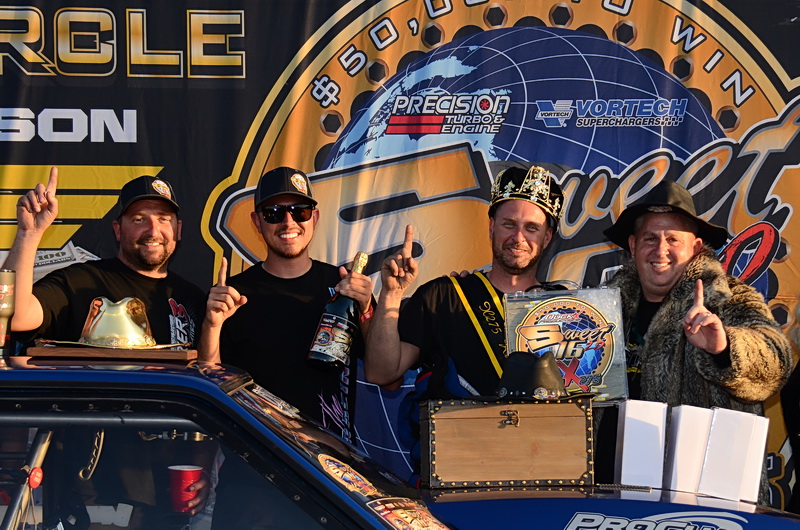 Early on, Nick and Rich Bruder established themselves among the favorites to leave South Georgia Motorsports Park with $50-grand in hand for winning the always tough X275 class at promoter Donald "Duck" Long's Sweet 16 event.

It would've been a good bet, as the Edison, NJ-based Bruder Brothers took their ProCharger-equipped '88 Mustang all the way to victory lane after a record-setting run of 4.235 seconds at 165.78 mph in the final round over Craig Walls.

"This was the most competitive X275 race we've ever been in, the biggest race ever for X275," driver Rich Bruder declared. "Everybody stepped up their game and was swinging for the fences. We had to fight through a very tough field, so it really feels great to win in the final and get the record back."

A nearly unbelievable 83 entries took shots at the tree over eight rounds of qualifying, with Manny Buginga, winner in X275 just a month earlier in Long's Lights Out 10 race at the same track, taking the early lead with a then-record 4.27 effort in round two on Thursday afternoon (Mar. 21).

His reign was short-lived, however, as Bruder recorded a 4.26 pass in round three that same evening. For most of Friday it looked like he would enter eliminations from the top spot, but in the eighth and final session, Rob Goss and his 2009 Hemi Challenger stepped up from Wyoming with a stellar 4.237-seconds pass to lead the quickest X275 field in history into Saturday's elimination rounds.

Remarkably, the bump spot at Sweet 16 was a 4.34 set by Texas racer Kenny Hubbard, who would have placed number one with the same run at Lights Out 10, and each of the top six starters ran quicker than Bruder's pre-Sweet 16 record of 4.29 seconds set last spring at Bowling Green, KY.

Bruder set low ET of the opening round with a 4.26 pass at 165.05 to beat an off-the-pace Hubbard, with Goss and Buginga also advancing. 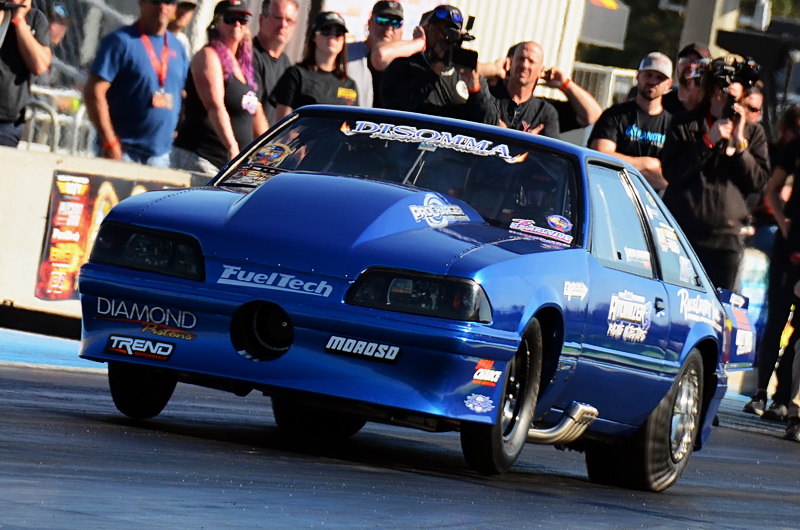 In round two, low ET belonged to eighth-place qualifier Gary White with a 4.32 in the unique Titan Motorsports turbocharged '94 Supra; however, Goss took the win in 4.36 seconds thanks to a sizable .070 holeshot. Meanwhile, with the track heating up under a sunny south Georgia sky, Shane Fisher won over Buginga from the number-11 spot, 13th-place starter Walls pedaled his '91 Mustang past number-five Brian Brooks, and Bruder survived a similar traction-challenged pairing with a 5.25 win over James Lawrence.

"It seems like you always need one round of luck to win anything," crew chief Nick Bruder later observed. "But I also have to say the rules package was very close. You know, John Sears and his guys, they did a great job in making sure every combination was on an even playing field. We all appreciate that."

Unfortunately for Goss, winner of Long's No Mercy 9 event last fall at SGMP, his familiar black Dodge refused to fire for the semis, handing a solo pass to Walls, who advanced with a 4.35 pass at 162.53 mph.

Next up, Bruder led stripe-to-stripe over Fisher, who slowed to 4.64 while Bruder secured lane choice for the final with a 4.31 at 163.95-mph combo.

"We left our round-one tuneup in it. We wanted a .26 and we got a .23," Nick Bruder said shortly after enjoying an extended winner's circle celebration. "The track got really good, it got a lot better for the final with some shade on it. It just picked up everywhere." 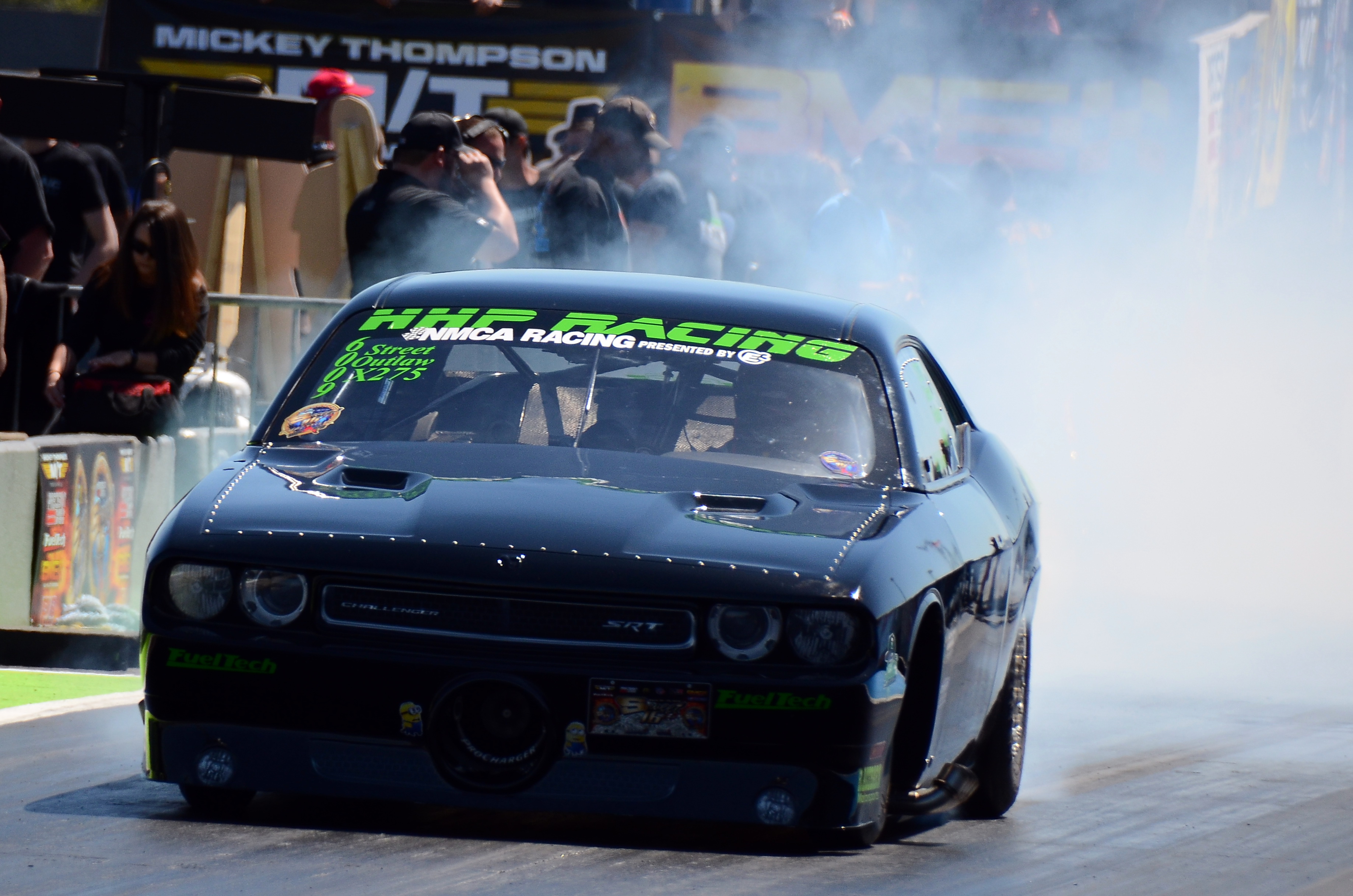 He also revealed the only significant setback to the Bruder team's effort came with a broken blower gear drive in the semis.

"We had to take the pan down and check the rod bearings, too, so we actually had to redo a whole bunch of stuff," he said. "Thank God we had a long time between rounds and for everyone that helped us out to fix it. We appreciate all their help and thanks to all our sponsors, too. We really couldn't be out here without them."

Brother Rich agreed, pointing out that the Sweet 16 race was tough from start to finish for everyone involved.

"You have to be racing hard all through the day. Everybody has their car set on kill and it’s hard to back them down. Your car is so up and there's so little margin of error," he said. "That's why it's so important to have people like Menscer and ProCharger out here with us. We're happy to win this for them."