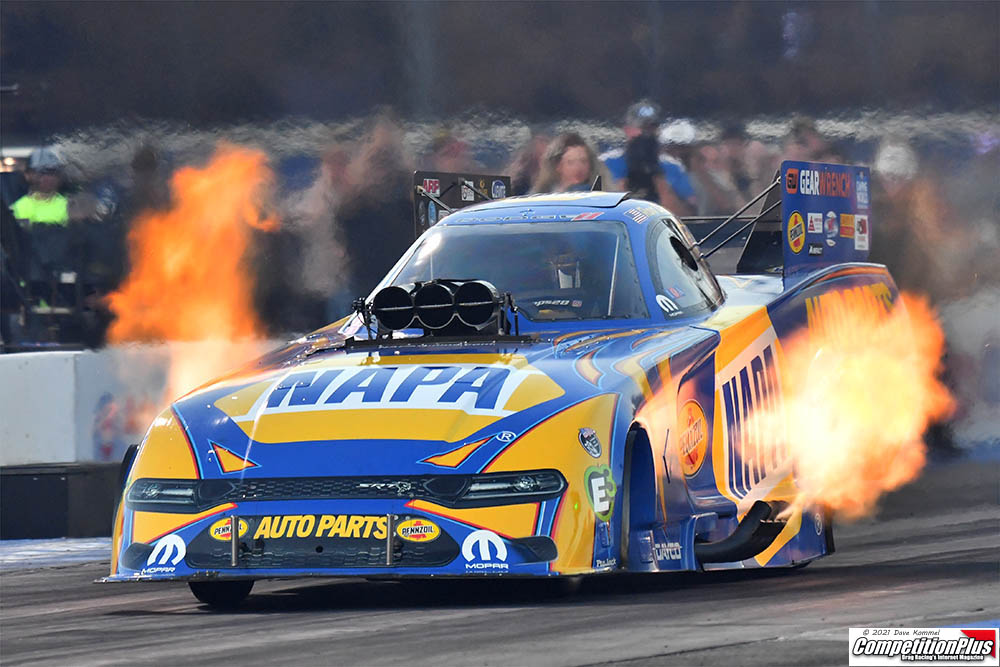 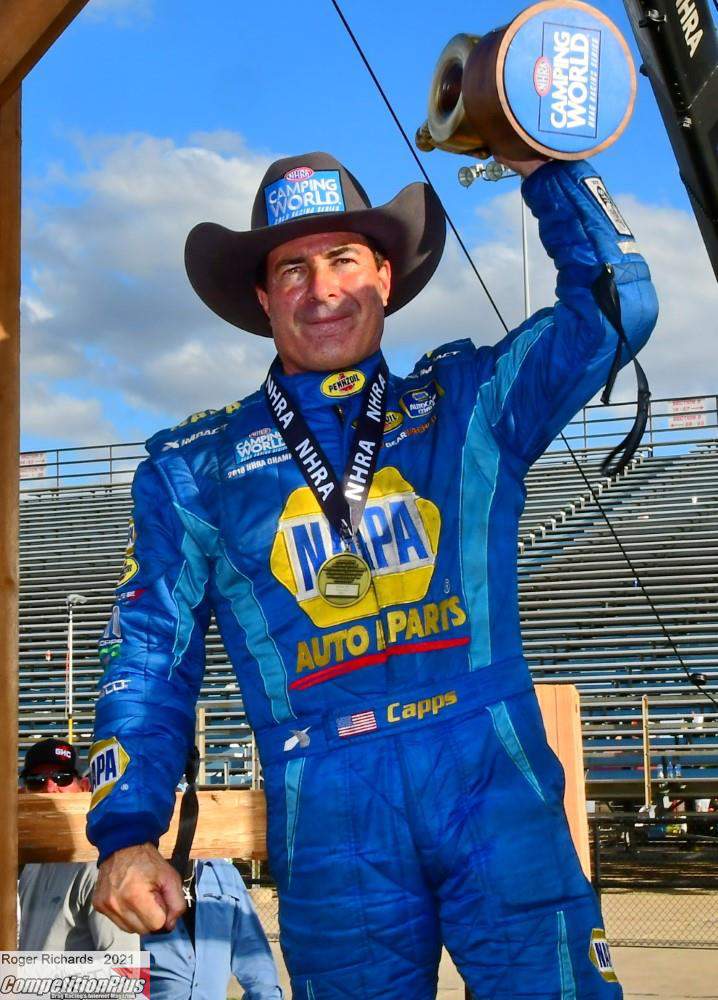 If you're going to win a championship, it's best to do it in the season where there's one of the most contested points battles ever.

In a year where the championship points lead changed ten times in twenty races, Ron Capps scored his second career Funny Car title in a season that didn't need manufactured excitement via the Countdown; it all came organically.

Capps, an admitted student of the sport, passed the class in what many speculate to be his final race as part of the Don Schumacher Racing organization.

Capps was locked in a battle with DSR teammate Matt Hagan and lost in a second-round battle with the defending champion. The NAPA Auto Parts-sponsored driver had to sweat it out until one round later when Alexis DeJoria beat Hagan, who needed to win the race to pass Capps.

"I've been here a bunch of times," Capps said. "We've lost a lot of championships by close margins. But I figured there's no way it's going to be easy. It's not going to be you show up and you end up winning a round. That team's too good to figure out that you're just going to get by them and expect them not to put up a fight."

Capps' season was behind the eight-ball with the sudden retirement of long-time crew chief Rahn Tobler from the jump. Team owner Don Schumacher decided to bring in the tuning duo of John Medlen and Dean "Guido" Antonelli, formerly of the Jack Beckman Infinite Warrior team.

Capps has had a rich history with the two, so the meshing part came naturally.

"Guido and I go way back, to my first year as a Top Fuel driver and I drove the rig, and I worked on the car, and Guido worked for John Force and drove the trucks," Capps recalled. "He taught me a lot of things on the road, like where to go to get dry cleaning and where to eat on the road. And so we became very fast friends and here we are later on getting to work together, finally." 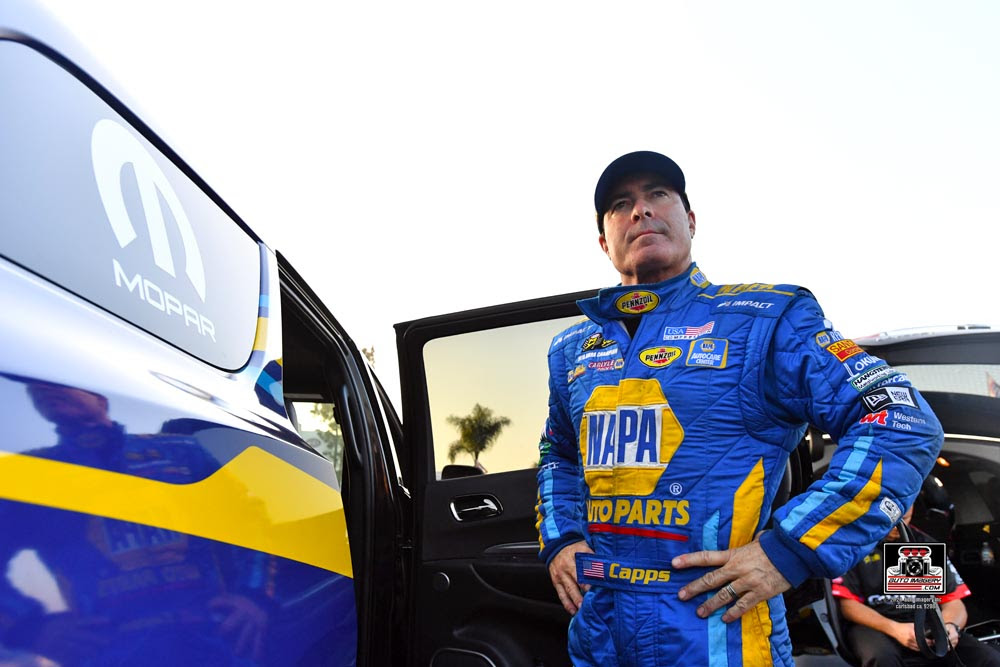 And then there has been Medlen, whose son Eric Medlen lost his life days after an accident while testing in Gainesville, Fla., in 2007.

"John Medlen, some weird stuff's happened the last few races with John Medlen, weird in a good way," Capps said. "Obviously, Eric, we miss Eric. I look at Eric, every run on the back of the injector. So I always feel like he's looking over me.

"We've had some weird stuff where John felt Eric's presence. Actually pictures talking back to him at times and waking up in dreams, which has been pretty cool to listen to. And today we lost when we came back and he's got a couple pictures of Eric in the lounge where the crew chiefs work. And he's always given me these quotes, these Italian quotes, which is cool to get from John Medlen, right? And we got back and we lost that round and he said, I came in and I looked at it and he said he apologized to Eric, 'Sorry, bud."

"He said, the picture talked right back to him and said, 'It's okay. It's going to be all right.'"

"He said clear as a bell. And so he's telling me this with his hands on my shoulders, and I'm just tearing up. I'm like, 'Oh my God."

"I mean, that is crazy - how much, if you've ever been around John Medlen, he's very spiritual.

Capps, a bridesmaid for so many years in championship battles before 2016, took his approach to win a second title in stride. In so many ways, his second crown validated a first one he admits to never flaunting.

"I never wear my [2016} ring," Capps admitted. "I always approach it like I'm trying to win another championship, like I've never won one. Some drivers wear it and they walk around with it and they shine it and everything. I don't know; I just know that my wife's never let any racing stuff in my house. We've had the world championship trophy next to our TV, where we'd sit and watch in the family room. It just sat there by itself. So every time we sit down and watch TV, I'm glancing over at the trophy, just staring at it and going, 'Oh my God, how cool would it be to have another one on the other side of the TV."

"Not thinking it would ever happen again because Funny Cars are so tough, but you know. No matter what, I'm never going to be ever close to the winningest Funny Car driver or the anything in Funny Car. I've just had to chug along with some great people around me and just do our thing. And I'm happy to be number two to the Goat. It doesn't bother me that I'm never going to be the winningest of anything in Funny Car. It's okay. I'm proud to do that. I'm proud to represent, but to have a number two championship, it validates a little bit more. It really does, but I'm still going to wake up January 1st and it's going to be, 'Let's go get another one."

For Capps, the battle for the title was quite intense. He began the first part of the regular season as a mid-pack points earner, climbing as high as fourth on the strength of four semifinal finishes and a runner-up in Houston. It wasn't until the tour rolled into Pomona, Ca., in July for the so-called Winternationals that Capps exerted himself as a championship contender with a win and the points lead. He fell out of the top spot the next race but maintained his front-running status and reclaimed the top spot on the strength of a U.S. Nationals runner-up, and went into the Countdown to the Championship as the driver to beat. 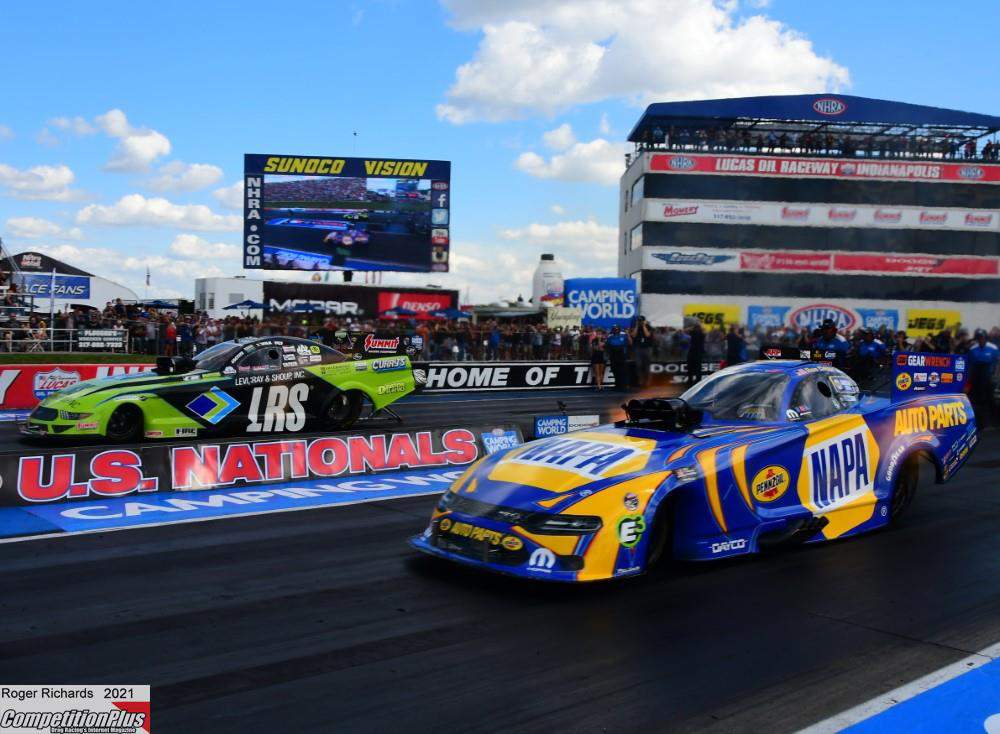 This lead was short-lived as Capps fell from the perch but jumped ahead two races later following a semifinal finish in Charlotte. One race later, Capps lost the lead after a quarterfinal loss in St. Louis, and Hagan rebounded with back-to-back final rounds there and in Dallas.

However, with a Hagan first-round loss in Bristol, and Capps' subsequent semifinal finish, he retook the lead and never looked back en route to clinching the title and one of the perks accompanying it.

"I get a Dodge Hellcat to drive for a year," Capps said. "I can't wait. I've missed out. Beckman got one, Hagan got one, Tommy Johnson got one the one year, and I've been with DSR longer than anybody. And so I can't wait to drive one all year long. That's probably the most exciting part of it."

Capps wasn't fully ready to address the elephant in the room; no pun intended.

"There's a lot of stuff. December 9th, PRI opening day, we're going to announce everything that's going on," Capps said. "I've been leaning on all these guys; I've been calling all these owners about advice on what to do next. It's very exciting. This sport is in good hands, and we're all going to be building on it, and we can't wait."