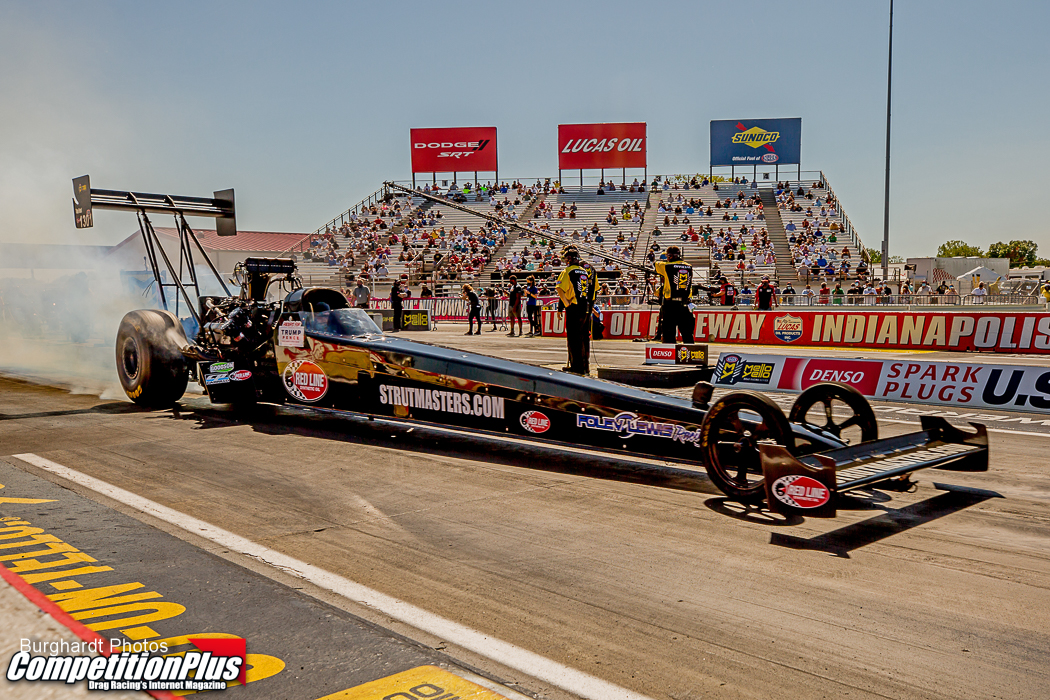 With two outstanding qualifying efforts at the Denso NHRA U.S. Nationals, especially for a part-time team with not a single full-time crew member, Top Fuel owner-driver Doug Foley’s team appears to be improving. This was supposed to be his learning year, his refresher year, with the revamped Foley & Lewis team.

And he definitely is making progress. But he’s not convinced the NHRA is. And he isn’t sure if his team – or many other teams – can survive if the NHRA doesn’t start making changes that reflect consideration of what the mid- to small-size teams need.

“Maybe they'll have nine full-time cars next year, but it will be single digits of how many full-time dragsters there are running the tour next year,” Foley said. “I predict there will be about six races next year that will have 11 or less Top Fuel cars next year. That's the beginning of the end. As soon as you've done that, you basically put the closed sign up. As soon as you prove to the world we don't have enough cars, we're screwed, just telling the world, ‘Hey, listen, we're now a little mom-and-pop organization. We're more of a car club than we are a national sanctioning body.’ So we have to do everything we can in our power to prevent that from happening.”

Some might wonder how the NHRA got from its glory days to the perceived brink of doom. But Foley didn’t hesitate to give his opinion: “not enough attention paid to the teams.

“It's like us and the sanctioning body, and none of us are together. None of us are on the same side. We have to get together because they're going to have nothing left,” he said. “If we go away, they've got nothing to sell. We are their product. The problem is you have a sanctioning body selling a product that they don't own any of the assets. Without these people, they have nothing to sell. Zero. Anybody who thinks that we're not in trouble now is a fool.

“But if we're going to save this sport,” Foley said, “it's going to take these groups of people sitting down together and saying, ‘How do we fix this? How do we make it better? How do we get more butts in the seats? Because that's what we need.”

One huge problem is his perception that the “have-nots” of the sport don’t get the attention or respect the bigger teams do.

“I think the problem is there's NHRA and there's the racers. I can't honestly say the last time we were actually invited as a group to sit down and discuss that. Almost 10 years I was gone from the sport. Never once did they ever call me and say, ‘How do we get Doug Foley back out here?’ Never once. Don't fill that room with [multicar team owners] Connie Kalitta and Don Schumacher. You have to put some of those part-time cars in there to discuss what we're going through, what would make our life a little bit simpler, what would make us attend more races. If they don't start having these meetings and these conversations, this sport five years from now is going to be totally different,” he said.

“We're not far away from them starting that conversation of ‘What does an eight-car field look like?’

“We have to have an uncomfortable conversation with some of the teams. Those sponsors that come across and are just willing to help us, you have to be fair with them, too. You have to give them what they paid for. So it's a full-circle deal, and the only way we're going to fix it is there needs to be some conversation. There needs to be ‘How do we get together and try and listen?’ he said. “We need big change.”

“Even what we consider the well-funded teams are not as well-funded anymore. They're just not,” Foley said. “With that the case, those well-funded teams used to be 80 percent of the entire field. Now, it could be 25 percent that don't have to worry about it. They could run the entire season – not a problem. That's a bad direction for this sport to go in. So one way to fix it: reduce the amount of races we go to, reduce the schedule.

“I like the two qualifiers. I really do,” he said. “I'm all about nighttime racing. We have to do something.” 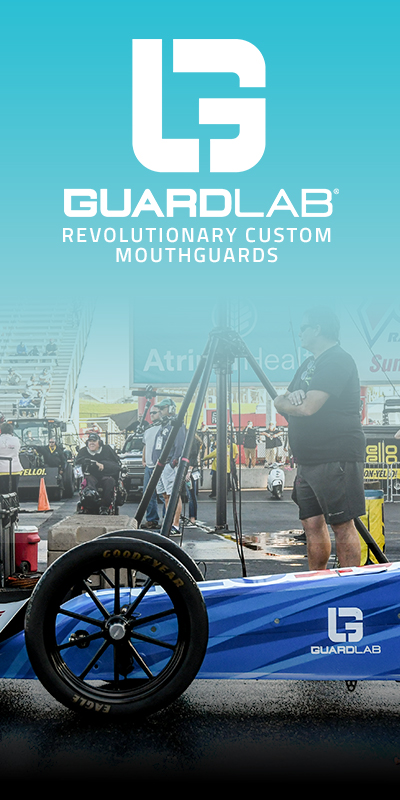 Moreover, he said the smart move would be to schedule races for Friday and Saturday, with Sunday as the rainout date.

“I'm a true believer that anybody can take a Friday afternoon off. If we can do it Friday, Friday night into evening, qualifying and then start eliminations on Saturday at 4 o’clock so the last two will be under the lights. It'll keep them here. I think that's the best way – plus the fact is we never have a rainout because it automatically gets pushed to Sunday. We have that extra day now, and it's a day that we can bring fans in. You can't do a rainout on Sunday and expect them to come on Monday.”

The one impressive exception in recent times is Epping, N.H., where a Monday crowd after a Sunday rainout a few years ago looked as strong as a weekend day at many other venues.

“When I first started this, everybody who was walking down the aisle was 15 to 50. Now they're 50 to 90. We need to fix that, and the only way to fix that is get those young kids out here with their parents, their grandparents. Go sit in the stands. You watch one of these cars at night, it'll hook you for life,” Foley said.

“In most cities, this only comes one weekend a year, so if we hook you for life, they're going to buy their tickets for that one weekend. Maybe they won't travel to another one, but that's all we need. All we need is 50-60,000 people in each market. That's all we need. But we need to start building that back up. Our average fan, no matter what anybody says, is older.”

The television package is another thing Foley said he’d revise.

“They say it's hard to do night racing on TV. Let's put it this way: Technology's pretty damn good. I started racing when they came out with an instamatic camera to take pictures of these cars and now these guys got these four-foot lenses they can barely carry. It's changed. There's no doubt that they can set up a program,” he said.

“You look at a Sunday night,” Foley said. “We compete with the beginning of football season, all the baseball season, golf, NASCAR. You move this thing to Saturday night, you move eliminations to Saturday night, what are we competing with? Give me a break. So it totally opens up a new market, opens up new customers, maybe it gets shown in some of those sports bars where there's not a whole lot going on. Who knows?”

The payout system is one all racers will agree needs attention, needs to be increased. Foley agreed.

For years the event purse had given $50,000 to the winner (comparable to what Jack Nicklaus made for winning a major PGA tournament – in 1974) and $22,000 to the runner-up. That’s below what market value should be, most would say, but the racers tolerated it. The breakdown awarded $18,000 to the semifinalists, $14,000 to second-place finishers, and $10,000 to first-round losers.

Foley said he loves the fact that low-budget teams are sacrificing to enter races and keep the car counts elevated. At the same time, he said, “I hate to see guys that base their business model around what NHRA is doing. If we rely on NHRA – we used to – now we're starting to earn less and the problem is that there's more of a divide now because we're getting paid less.

“I get $2,500 less this weekend,” he said during the U.S. Nationals. “We understand there’s a pandemic, but I can tell you right now: If it is $7,500 on January 1, this [car and equipment] will stay in the garage, not because I can't afford the other $2,500 but because of the principle. I am not going in a negative direction. I can tell you that right now.”

“Look at it this way – and this is a fact, this is not what anybody else tells you – 50 percent of the field next year in dragster will be non-fulltime cars,” he said. “Maybe they'll have nine full-time cars next year, but it will be single digits of how many full-time dragsters there are running the tour next year.

“You got to give them some ideas,” he said. “You got to come out and figure out how to help the Doug Foleys, the T.J. Zizzos, the Justin Ashleys. How do you help those teams find that extra $200,000? Not a million, let them find an extra $200,000. These are teams that are pretty thrifty with their money. OK - $200,000 where it would normally be good for three or four races with a big team, we would stretch it out to eight. We would figure that out.

“We need to figure out what it takes to fix this sport and it's going to mean somebody's got to be to race the entire season for a million bucks,” Foley said. “They have to be able to do it for a million dollars. Not three million, a million.”

He said he’s thrilled the Countdown is gone, at least for now.

“I like the no Countdown. Especially since the Countdown will have no value next year – because if you have nine cars what's the Countdown to 10? If you knock it down to seven, two guys don’t get in.  You’re just hurting the two guys that did support you. That's not the way,” he said.

“What I've always really liked, which most people wouldn't agree with, is two halves of a season. It really should be two halves of a season. It would be maybe a little convoluted, but it can be figured out. It's not that hard,” he said. “But if you did two halves of the season where a guy like me, there would be a benefit to me racing everything east of the Mississippi. There's no reason for me to go west of the Mississippi. But the guys who are on the West Coast could support them on those West Coast national events. Those fulltime cars would still run for the championship. I understand that; I'm not looking to be included in that. I understand they deserve it. They went to all of them.

“There could be some sort of runoff between those guys who supported the East Coast and those guys who supported the West Coast or something. Some little battle or something like that. So this way there would be a little bit of fun in it for us to be able to say there's something for us to strive for,” Foley said. “I can't strive for 23 races. That's like me waking up in the morning saying I strive to go bankrupt.”

Matters could be resolved or at least tackled and problems could be solved or averted, Foley contends, through civil and meaningful conversations – and those are free.