HADDOCK FINDING MOTIVATION WHERE HE CAN 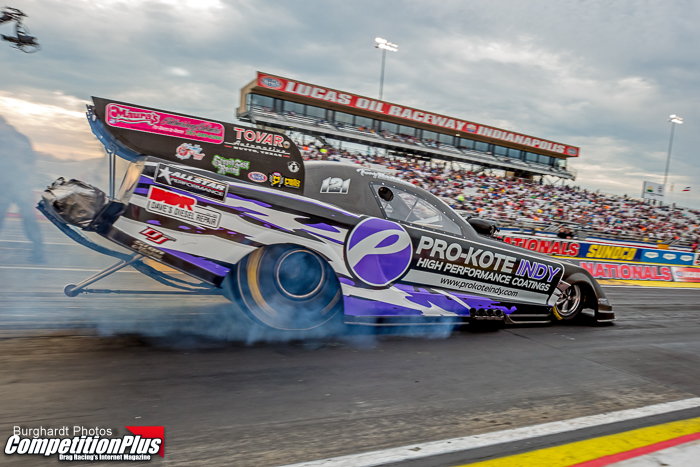 Those four little words are the sole driving force behind an entire race team as veteran racer Terry Haddock clings to the possibilities of the unknown in the sport of drag racing.

In more than two decades behind the wheel, Haddock has seen it all in the sport. He has been a world champion in a nitro Funny Car racing with the International Hot Rod Association in the late 2000s. But with the NHRA, he hasn’t been nearly as successful.

In more than 270 starts, Haddock has just seven round wins and spends most race weekends battling on Fridays and Saturdays to make the field instead of fighting to go rounds on Sunday.

But Haddock believes his time is coming. And after years of watching his peers start at the bottom and work their way to the top, Haddock believes that he too can experience what it is like contending for wins on race day.

“No matter what, I love racing. But I feel that when I first started everybody said that you have to pay your dues. Well, we’ve been paying our dues for a long time,” Haddock said. “The way I see it, if you quit now, you don’t know how close you were to getting there. You don’t know if you are there. Plus, I’ve got 20 some years into it, so what are you going to do?”

Part of the motivation driving Haddock on race weekends is the success of other drivers from the same racing circles.

As a former IHRA champion, Haddock has watched former IHRA success stories such as Clay Millican, Terry McMillen, Matt Hagan, and others go on to collect Wallys. Now Haddock hopes he can join that list of former IHRA alums to win with the NHRA.

“It is cool to see when a smaller team like Terry McMillen do well. He came from the same place. But the biggest one would be Scott Palmer,” Haddock said. “To see that he came from the same mold that we did with no financial resources and look at him now. That is a real motivator. It shows that it is out there.”

Of course, money is the biggest hindrance to a team like Haddocks.

Lacking big sponsors and financial backing, Haddock survives on his own grit and determination. But even that isn’t always enough to survive. He cites the fact that there are a number of Top Fuel and Funny Car teams across the country that show up for one or two race stints, but can’t afford to race a full or partial schedule, as part of the problem holding the sport back.

Haddock believes that a better financial model would increase car counts and make it easier for teams such as his to contend on Sundays.

“I think the sport has got a little out of hand with the money. You come here and there are 21 dragsters and 19 Funny Cars. You go to Seattle and there are 16 Funny Cars. The point is that there are cars sitting all across the country that can come out and race, but what it costs to race isn’t covered by what it generates,” Haddock said. “Everybody is doing their best. But you can’t get by on the qualifying checks. We are trying hard, but it is just not enough money.”

For now, Haddock is left playing the hands that he is dealt. And that includes the addition of noted tuner/team manage Johnny West who was added to the team earlier in the year and has made a big improvement in the management of the team.

“Johnny has taught me about details and how important it is. I would always handle the big problems and the big fires and say that the little stuff doesn’t matter,” Haddock said. “He has taught me and showed me how important the little details are. In fact, the little details prevent the big problems we are having. It took a while for me to get my head around it, but it has really been amazing when you can learn from a guy like him because he has done it all.

“He’s lived just like we are. He knows, so now when I am about to do something stupid he usually catches me beforehand and stops it.”

Thanks to that focus on the little things, Haddock has seen gradual improvement. Just two weeks ago in Brainerd Haddock ran his career-best numbers and he hopes to build on that this weekend in Indy.

So what would it mean to finally go a few rounds on Sunday and, perhaps one day, hoist a Wally?

“It would mean validation,” Haddock said. “Everybody knows that on any given day anybody can win. God has a script on how it is going to go. We don’t know, but it is already planned. When it is our day, it will be our day. We just have to be there for it.”