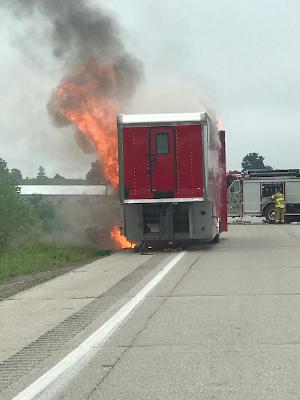 Josh Haskett was supposed to be one of the teams, who were scheduled to compete at the prestigious Denso Spark Plugs U.S. Nationals at Lucas Oil Raceway at Indianapolis in Brownsburg, Indiana last weekend. The North Carolina native, who competes in Top Alcohol Funny Car, was not able to compete at The Big Go.

Haskett -- who does not have a big primary sponsor -- saw his entire trailer go up in flames on Tuesday, September 1st, on Route 35 in Rio Grande, Ohio. He said a battery was the cause of the fire.

“The tow car was downstairs in the hauler and it was the battery,” Haskett said. “According to the Fire Department and those that were there, all the hotspots were right there at the trunk. In the car, that’s where the battery was in the trunk. Thirty minutes prior to that, see, we had left North Carolina at 3 in the morning and we stopped to get something to eat around 7 am. Then, probably 20 miles up 35 after we stopped, the road was very rough. The trailer was bouncing. We assume that the battery was bouncing, which led to the fire.”

Haskett was expected to be one of 23 Top Alcohol Funny Car teams on the gigantic property surrounding Lucas Oil Raceway for the biggest race of the season. But due to the fire, between $400,000-500,000 in racing equipment, two motors, tow vehicle, and their race car was gone. 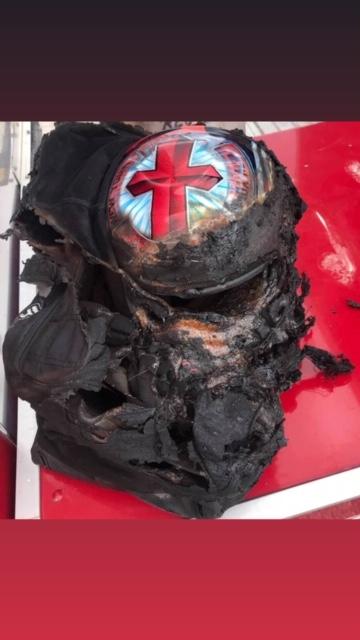 “The bad thing is I only had liability insurance on the truck and the trailer,” he said. “I did not have full coverage and two weeks ago, I had re-done my insurance and my insurance company was giving me quotes on what it would cost for full coverage. We were getting ready to run, before zMAX was canceled, the plan was to run Indy, zMAX, Gainesville, Virginia, and then the following weekend, my dad, Bob Haskett, was going into the East Coast Drag Racing Hall of Fame. Now, due to COVID, it has been moved to next year. I told them to just put liability on it and when I got back, I was planning on switching it over to whatever quotes they had gotten me.

“The bad part is we had just upgraded our entire program with all the latest and greatest -- heads, two motors, spare parts. We even had a brand new awning that we used for the first time in Gainesville when all this COVID happened. This was going to be the second-time we used it. This team has been going on since 1965.”

Haskett has been having a tough time coping with the loss of the equipment and memories. They know that there was a reason behind this fire, but are trying to find what that might have been.

“The hardest part is that this obviously happened for a reason,” he said. “We don’t know what the outcome is. God can either bless us ten fold or bless us in a different way. We have more witnesses at the track and all over the world -- and that’s what our racing was about. It’s devastating. It could have been a lot worse, but it couldn’t have been more perfect, as I pulled over after I saw some smoke coming out. Where I pulled over, when the trooper got there, I opened up the side doors, because obviously that’s what you would do, but it was like a backdraft. One door blew open and it sucked oxygen in, and I grabbed a couple of things, and then I disconnected the toter home and moved it up approximately 200-300 feet. It was in an area called Rio Grande and it’s a volunteer fire department. It’s a really small fire department, as none of them had foam, they all had water. Everything in the trailer was gone.” 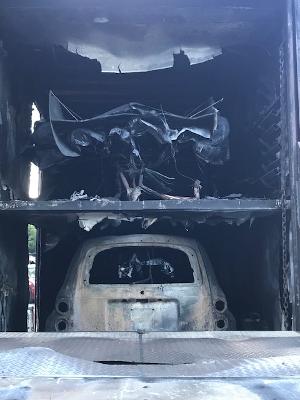 While everything was gone in the trailer, only one thing was not touched. That’s the cross on Haskett’s helmet.

“The trooper was really upset that this happened to us,” Haskett said. “When everything stopped and I was able to get my helmet out of the trailer, everything was burned but the cross. I know for most people, it’s really hard to understand if you don’t believe. When I saw the reactions of the state trooper and the fire department, if that touched one of those lives, it was well worth it. Obviously, it was meant for something. The trooper then allowed me to hook right back up to it -- and most of the time, you’re not allowed to do that -- he let me pull it off, then one of the guys from the fire department had a shop. I had to replace a couple of tires -- which had melted -- before going to the hotel. The next day, I couldn’t touch the door on the trailer, because it was so hot. We had to disconnect the batteries because one of the batteries was still smoking. I didn’t realize that there was a lot more damage due to the heat. I was able to drive it home.”

The Haskett Top Alcohol Funny Car wants to rebuild. They are presently asking for help through a GoFundMe account that has been established at https://www.gofundme.com/f/help-rebuild-haskett-bros-racing.

“I don’t want this to be the end, nor does my father,” he said. “God can open or close any door he wants. I don’t know what he has in store for us. I’m not ready to give up, nor is my father. We want to race again.”