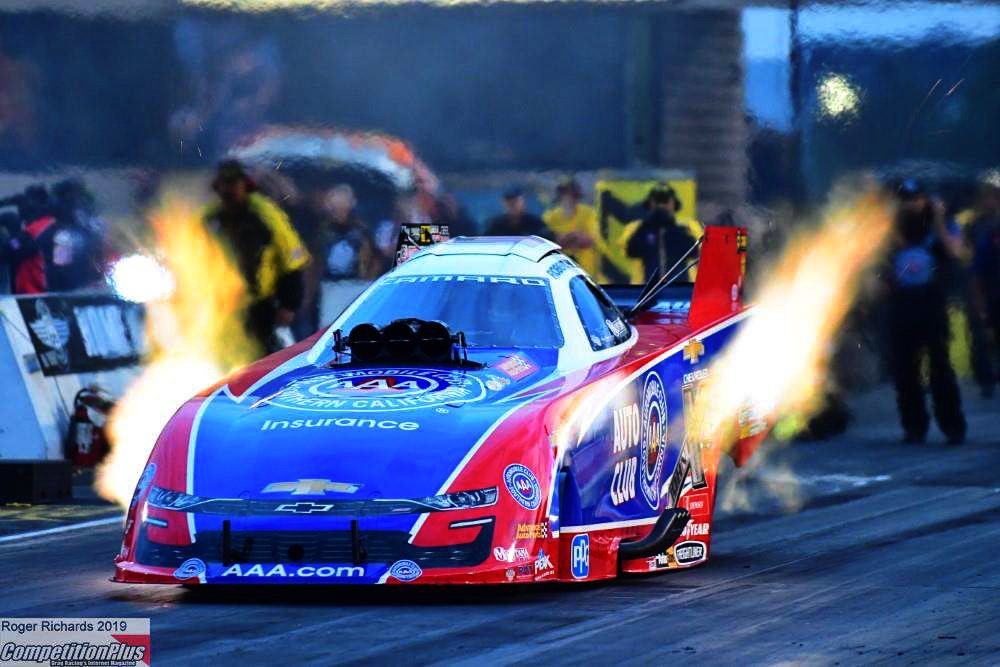 There was nothing safe about Robert Hight’s position entering the fourth and final session of qualifying Saturday.

Three disappointing runs prior left Hight 14th on the ladder, hardly a lock to make the race with one of the larger Funny Car fields of the season on hand.

But with potential elimination on the line, Hight and veteran crew chief Jimmy Prock answered the call with a chart-topping lap in the final opportunity of the weekend to take the top qualifier award Saturday at the Route 66 NHRA Nationals at Route 66 Raceway.

“This is awesome. It is especially awesome to come to Chicago and see full fields like this,” Hight said. “This is what you want to see every week in Top Fuel and Funny Car. There are a lot of good cars here and, unfortunately, that means some aren’t going to make it and we were wondering if that was going to be us. When you are 14th going into the final session, that is a little nerve-racking.”

Mother nature played a big part in Hight’s accession up the ladder as a scheduled early evening session was pushed under the lights due to rain.

With cooler conditions conducive to quicker runs, especially in the hands of legendary hero tuner Prock, Hight posted a 3.880-second lap at 334.24 mph in the Auto Club Chevrolet Camaro SS Funny Car in session four to bolt to the top of the charts. It is Hight’s sixth No. 1 qualifier in nine races this season and the 66th of his career.

“I call that a perfect storm what we had roll through here today,” Hight said. “Basically, we wouldn’t have been in the top half of the field had (the rain) not happened. The conditions were there tonight and he gave it the power and it stuck. I knew going up there, being another night run, that it was either going to be real fast or it wasn’t going to make it. It was a great run and I am loving the conditions we are going to have tomorrow.

Having lead the championship standings every step of the way so far in 2019, Hight will look to add to his sterling record as he seeks his fifth final and fourth win of the season on Sunday.

Hight will face Jim Campbell in round one, with cool conditions leaving him excited to go racing.

“It is going to be 69 degrees so that track is going to be good,” Hight said. “If it is going to be that way all day, you can make four of these runs tomorrow. But there are a lot of other cars that are doing the same thing. There were two cars within two thousandths of us tonight. That just shows you how competitive this class is right now.”